For exonerated priests, ‘painful’ journeys come to an end 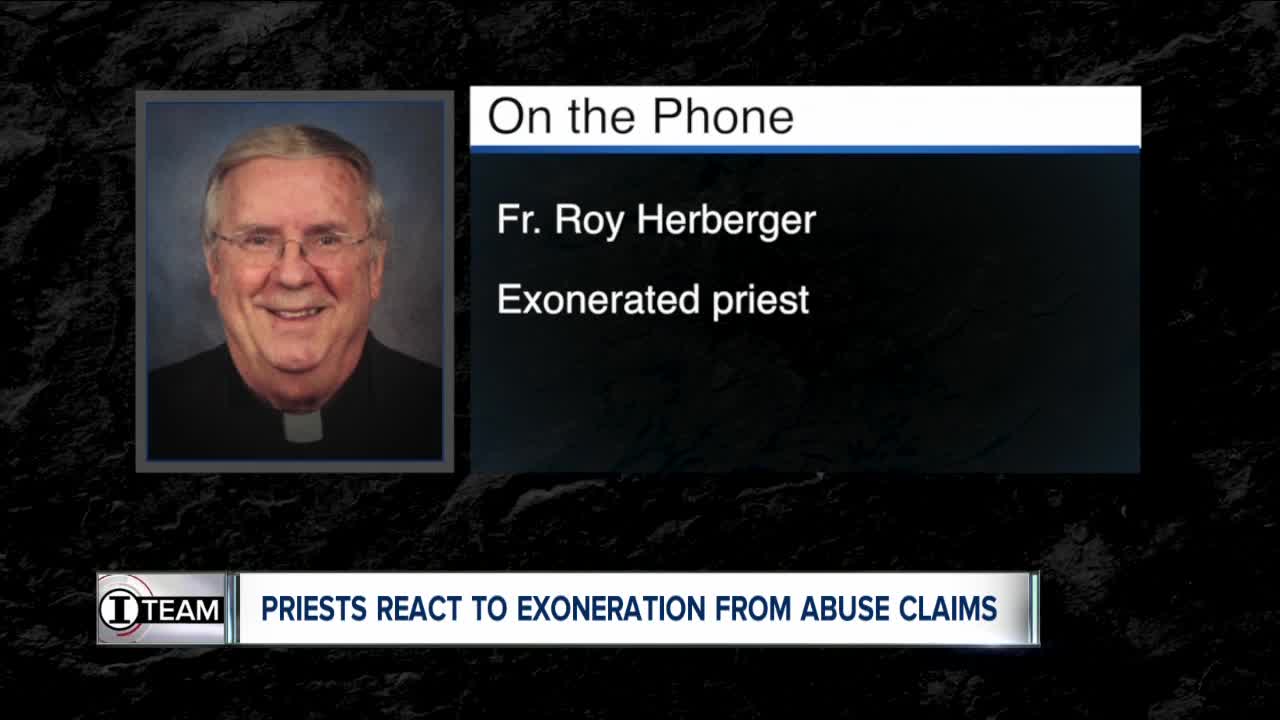 The Rev. Roy Herberger and Msgr. Fred Leising were exonerated of sexual abuse allegations made against them.

BUFFALO, N.Y. (WKBW) — The Rev. Roy Herberger was summoned to the Diocese of Buffalo chancery Friday afternoon without notice -- which is not usually a good sign for a diocesan priest.

But this time, the news was all good: After six months on the sidelines, Herberger was cleared of the sexual abuse allegation made against him in June. He would return to ministry immediately. (Msgr. Fred Leising was also cleared on Saturday, while two other suspended priests were found guilty by the diocese.)

“[It was] very painful, very difficult,” Herberger said Monday in a phone interview. “That personal element, and of course, the embarrassment.”

For six months, Herberger was not allowed to say Mass and also had to back out of four weddings he was supposed to witness. He wasn’t allowed to preside over funerals he wanted to be a part of, either, he said.

“I knew from the beginning of it there was no substance, and I was able to come up with different facts and proof,” Herberger said.

The allegation against Herberger was made in June by a man who said he was abused in the 1980s at St. Ann’s Church in Buffalo -- but Herberger said he was not a part of the church until around 2010.

His suspension stunned the parishioners at SS. Columba & Brigid Church in Buffalo, where Herberger was held in high regard for his work with the poor.

Herberger was also known for his collection of more than 500 Nativity sets he would display around Christmastime.

When he retired a few years ago, he made the collection available to the public -- and it’s those same people he thanked for their prayers and support while he was on leave.

“The prayers of the people, the letters, the good lawyer that I had all worked together in my favor,” he said.

Herberger took issue with the current process of investigating abuse complaints, saying that priests should not be put on leave unless there appears to be “substance” to the allegation. Currently, priests are suspended while the diocese investigates the allegation.

“Anybody can write a letter or have a letter written or make a phone call and make an accusation, but with no proof, with no evidence whatsoever, it just really bothers me,” he said.

The diocese has come under fire in recent months for leaving priests in ministry who have allegations against them, and with FBI agents now investigating the diocese for sexual abuse cover-ups, Herberger said he understands why church leaders may now be acting extra cautious in those cases.

Msgr. Leising, the second priest who was cleared of the accusations along with Herberger, said he harbored no anger toward his accuser but said the abuse scandal has had a “devastating effect” on Buffalo priests because “everybody feels they have a target on their back.”

Leising, who is retired after years working at Nativity church in Clarence and at Christ the King Seminary in East Aurora, said his first reaction after hearing of his reinstatement was “simply relief.”

“I had a kind of peace about me through this whole thing,” he said in an interview outside the priest retirement home where he lives. “It hasn’t been as difficult moment for me as it may have been for many others.”

That’s because Leising was only suspended for about a month and the allegations dealt not with child sexual abuse, but a claim that he stuck his tongue down the throat of a teenage girl in the 1980s. The claim could could not be substantiated, the diocese said in a statement Friday.

“I’m hoping that this moment will lead to lots of other reforms that I think are needed in the church, in lots of places,” Leising said, starting with what he termed a “clerical culture” of automatic deference toward clergy and a lack of humility among some clerics.

“In other words, it’s one thing to put me on a pedestal, it’s another thing to think I belong there, and I don’t belong there,” he said. “Like anyone else, I’m a sinner.”