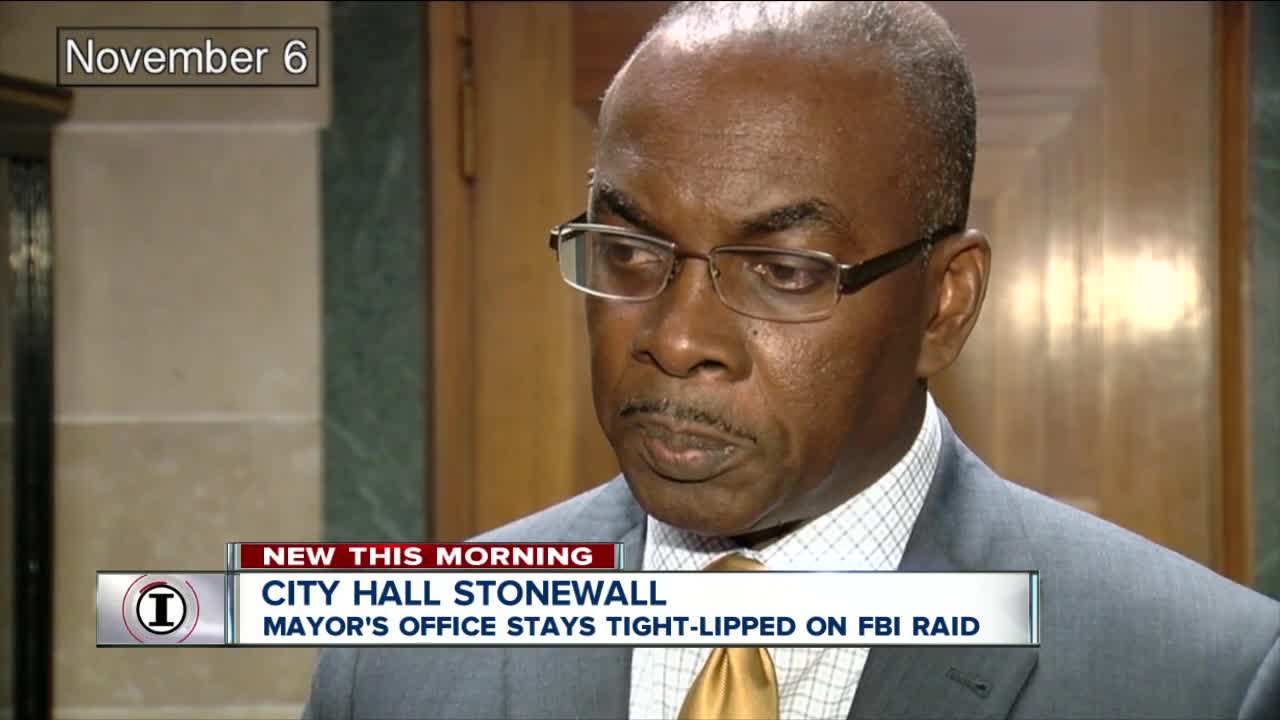 What started as a simple public records request has instead turned into an example of how Mayor Brown's administration defies New York State law when it comes to providing information to the public.

BUFFALO, N.Y. (WKBW) — There’s a good chance Nov. 6 was one of the most nerve-wracking days of Mayor Byron W. Brown’s 14 years in office.

That’s when FBI agents raided the offices of the Buffalo Urban Renewal Agency -- of which Brown is chairman -- on the third floor of City Hall.

A day after the raid, the mayor told 7 Eyewitness News he didn’t know what federal agents were looking for when they carried not just boxes, but whole carts of documents from Room 315.

So the 7 Eyewitness News I-Team has tried to follow the paper trail, filing Freedom of Information Law requests for the mayor’s emails, text messages and voicemails from the day of the raid. We wanted to know what he and his top aides were saying to each other as the FBI descended on the building.

But what started as a simple public records request has instead turned into an example of how the Brown administration defies New York State law when it comes to providing information to the public.

“It shouldn't take this long, it shouldn't be that complicated to fulfill your request,” said attorney Paul Wolf, who studies government transparency.

The I-Team asked for the communications of the mayor and his administrative assistant, as well as top aide Michael DeGeorge on Nov. 27.

State law says public agencies have five business days to provide records, deny the request or “furnish a written acknowledgment of the receipt” of the request and an estimated date when the records will be provided.

On Dec. 6, city lawyers said it would take "up to twenty business days" to determine whether they would provide the records.

It’s a deadline that came and went without any word from city leaders.

Thirty days after the city’s response -- 10 days past the legal deadline -- we finally got a city lawyer on the phone. He couldn’t cite a reason for the delay but said the mayor’s office was taking care of it.

The lawyer directed us to city spokesman DeGeorge, who’s paid $108,000 to speak for the mayor.

DeGeorge did not respond to our email following up, so we went to DeGeorge’s office in City Hall.

“You sent me an email yesterday saying that we’d get in touch and to set something up, and the only thing I know, Charlie, right now, is that it’s up in Law [Department], and they’re looking into it and trying to process it,” DeGeorge said.

When asked if there was a reason for the delay, DeGeorge replied, “I don’t know if there’s a delay.”

But a simple timeline made it clear that there was indeed a delay.

The I-Team’s original request was sent Nov. 27. The conversation with DeGeorge occurred Jan. 28 -- more than two months after we sent our request.

“Let me check with them, and then I’ll get back to you as soon as I can,” DeGeorge said last week.

Late Friday, three hours after that deadline passed (and 38 days since the city acknowledged the request), assistant corporation counsel Will Mathewson sent the I-Team a letter denying the records request.

Mathewson cited an exemption to the FOIL statute that allows governments to withhold documents that are deemed “inter-agency or intra-agency” materials. The city cited the State Committee on Open Government’s determination in other cases that “internal communications” fall under that category.

But Wolf, the open government attorney, said there’s no question emails and text messages from public officials paid with taxpayer money should be considered public documents -- and disclosed under the Freedom of Information Law.

“We elect people to represent us,” Wolf said. “We're paying them with our tax dollars to do work on behalf of the public. And part of that deal is the public gets the right to see what you're doing as an elected official.”

Wolf said despite Brown’s creation of an online data portal two years ago, the City of Buffalo has a poor record of transparency with public documents.

In July, Wolf’s group -- the Buffalo Niagara Coalition for Open Government -- surveyed 16 local municipalities, asking for all emails sent and received by top elected leaders during the course of one month.

Buffalo was one of five municipalities that -- 88 days later -- had still not provided the documents, despite the state’s 20-day rule for public records. The Amherst Town Clerk, for instance, provided 19 pages of emails on the same day of the request.

The I-Team didn’t ask for a month’s worth of emails like Wolf. We only asked for one day: the day FBI agents raided City Hall.

“The law is very clear: Government officials doing work in their official capacity, whether it's emails, text messages, letters, memos, that's all available to the public,” Wolf said. “And it shouldn't be this hard to obtain information.”