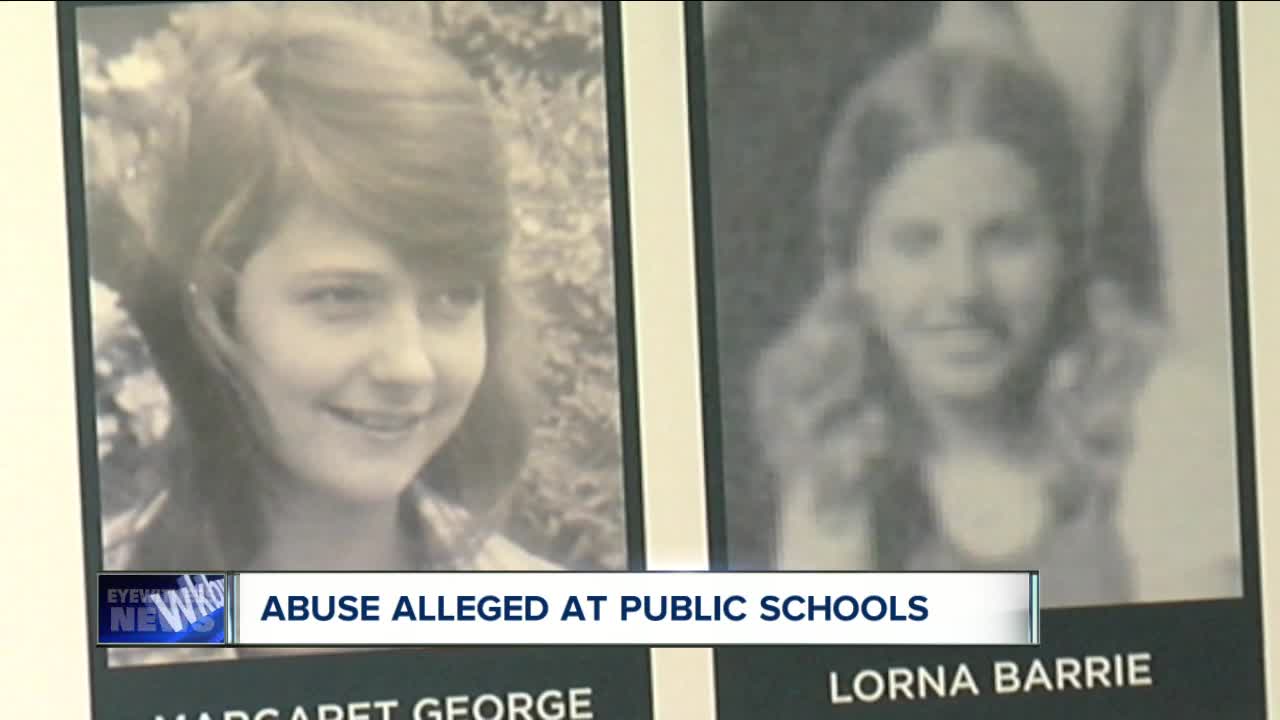 BUFFALO, N.Y. (WKBW) — It was a culture that perpetuated sexual abuse.

And a culture where people in positions of authority could have stood up and said something to stop the abuse -- but often, didn’t.

The survivors giving those descriptions aren’t talking about the Catholic Church, but rather, public schools throughout Western New York.

“We did nothing wrong,” abuse survivor Maggie Milanovich George said. “We were children.”

George said she was abused by former Kenmore West High School gym teacher Donald Sutton in 1971, when she was 15.

Lorna Orleman Barrie also filed a lawsuit against the school under the Child Victims Act. She and another accuser -- who received permission from the court to withhold her name -- say they were abused by former Kenmore West track coach Michael Indian. Barrie’s lawsuit states the abuse occurred in 1975, when she was 16.

“He always made it sound like he wanted to help me,” Barrie said of Indian. “And the only person he helped was himself.”

While 80 percent of the more than 200 lawsuits filed in Western New York under the Child Victims Act name the Diocese of Buffalo as a defendant, more lawsuits -- a total of 41 as of Friday, including new suits against Maryvale and Hamburg -- are being filed against public schools as of late.

Boyd said his firm expects to file between 60 and 90 suits against public schools by the time the one-year “look-back window” ends in August. Thirty-one suits currently target the Kenmore-Town of Tonawanda district, with 31 of those filed against alleged serial predator Arthur Werner, a retired fifth-grade teacher.

“There was definitely a culture problem at Kenmore in the 1970s in the 1980s,” Boyd said. “We don't know why Kenmore is such a problem. But Kenmore is a huge problem, and I can tell you that Niagara Falls is just as big.”

All of the districts named as defendants Friday released written statements saying they take the allegations seriously. They also stressed that the teachers are no longer employed by the schools. Sutton died last year in a murder-suicide involving his wife in Florida, and Indian did not respond to a message left for comment.

Barrie and George were silent at the time of the abuse, but Barrie did come forward years later to report the abuse to the school. She said she was brushed off by a Kenmore school administrator.

Linda Ulrich-Hagner, a former union representative at Kenmore West, had a similar experience. She blames herself for not saying more about rumors that were swirling about various teachers in the 1970s. She also recalled a disturbing conversation with a school official.

“It was a crime,” Ulrich-Hagner said. “Why didn't the district or the union call the police? I just don't get that.”

The administrator paused, she said, before saying, “It would have been bad PR.”

Both survivors say they are speaking out so that other women will have the courage to come forward.

“If your best friend tells you something confidence like this, tell somebody,” George said. “It can change a life.”

The statement issued by Ken-Ton CSD reads:
"The Ken-Ton School District is aware of serious and concerning allegations regarding conduct by former members of the district staff at the time of their employment approximately 40 years ago. The district has been committed to taking any and all action within the scope of its authority to appropriately respond to the allegations and has been in communication with the appropriate state authorities regarding this matter. The Ken-Ton School District takes any allegations of misconduct by staff extremely seriously regardless of how much time may have passed or whether the employee is or is not currently employed by the district."

The Maryvale UFSD issued this statement:
"The Maryvale Union Free School District was made aware of troubling allegations regarding the conduct of a former District employee occurring approximately 42 years ago. The former employee at issue retired from the District quite some time ago. The District is undertaking all appropriate steps in response to this information. The District has no higher priority than ensuring the safety and welfare of the District’s students, and is confident in the policies and procedures that are currently in place to protect the District’s students."

The Hamburg CSD says they are aware of the allegations against a former district employee and says the district deeply cares for the safety and well-being of all students. The school district reports they are taking all the appropriate steps in this case.