NCCC implements guidelines for students to return to campus 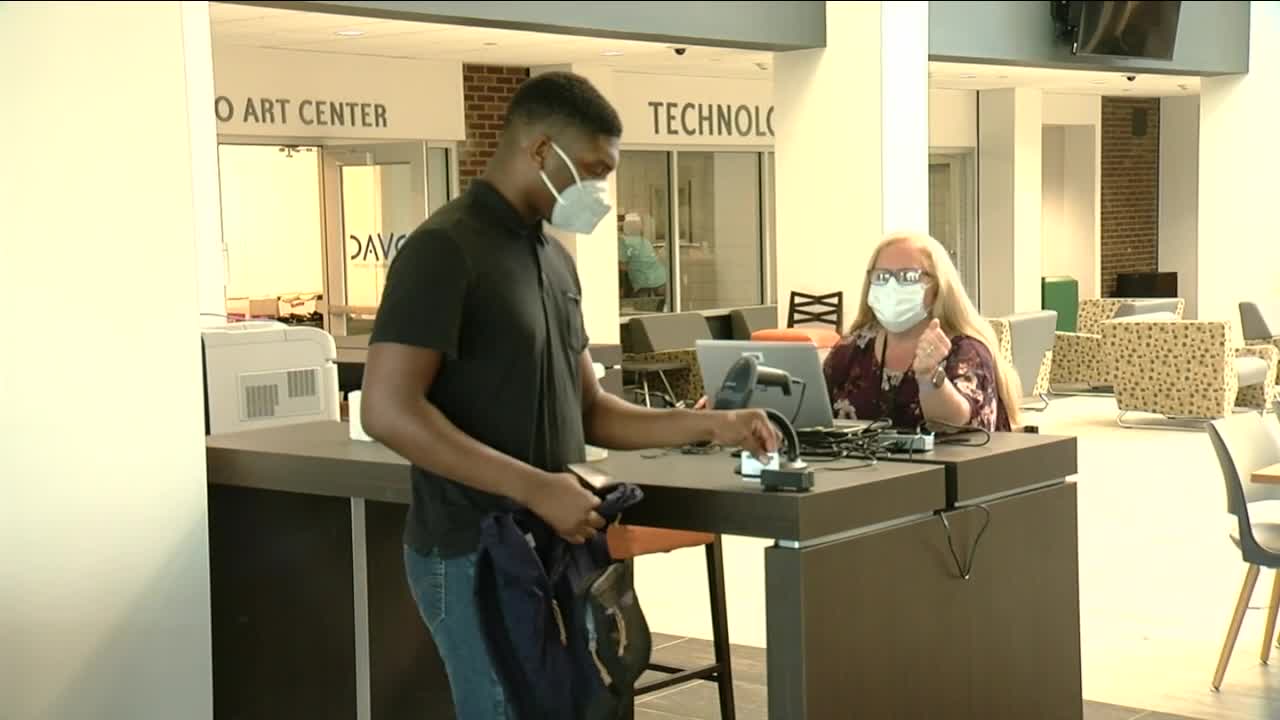 NCCC implements guidelines for students to return to campus

Area colleges and universities are ramping up for a new semester, but it will look much different with COVID-19 restrictions in place.

From the moment you enter the campus of NCCC in Sandborn, CDC guidelines are in place.

“I knew there was going to be different changes — I didn't expect to be of this magnitude,” Jackson noted.

Jackson says he was excited to be back on campus where summer lab sessions are underway.

But before walking into classrooms, a health screening comes first.

“I do feel like there will be some changes. It won’t be the same as last year,” Jackson remarked.

One of the first things students, staff and faculty must do is get their temperatures checked. A digital thermometer is mounted to the wall.

“Normal body temperature. Please pass,” the digital reading stated as Jackson stepped up to the wall.

After a temperature check, it's time for questions about possible symptoms of COIVD-19.

“So we have a real live feed of who's been in our building at t what time at any point in time that we can immediately turn that documentation order to the county,” said Wayne Lynch, vice president of operations.

The fall semester starts August 31 with a mix of on campus and on-line learning.

The school has worked to ensure students, faculty and staff will be safe.

“Everything from hand sanitizer to daily cleaning to really instituting to what's really a health care level technology from a screening stand point to and a sanitation standpoint,” Lynch explained.

There are hand sanitizers in the hallways, and plexiglass has been added science labs.

“What will do to make sure that if there were to be cases starting to come in that were from the campus. Would that shut you down?” asked Buckley.

“We have a de-escalation plan as part of our overall reopening. There's also a re-closing plan unfortunately,” replied Lynch. “We also instituted a mechanism — so should there be a positive case notified to the college, we will engage the Niagara County Health Department and be able to institute contract tracing.”

In Amherst Daemen College is getting ready to reopen and will require mandatory covid testing for all students, faculty and staff.

The college issued a statement Thursday:

“It is believed that Daemen is the only college in Western New York and possibly the state that has mandatory testing being overseen by the college in advance of returning to campus (other colleges that may have mandatory testing appears to be the responsibility of each individual). The testing is a critical step in a screening and testing process to protect the health and well-being of the campus community.”

“I haven't heard a peep from most of those colleges because they were basically waiting for the guidance from New York State for higher education — which just came out about a week and a half ago,” Poloncarz said.

But at NCCC, they're ready to face the pandemic in a smart and safe way.

“We’ve taken an approach to mitigate the risk as much as possible. We want to ensure that anyone with symptoms is not brought on our campus to continue to spread the disease,” Lynch responded.

“I am more than happy to know that NCCC is doing every thing it can to make sure like the whole corona virus doesn't spread,” Jackson said.

This fall close to 900 students are expected to return. 25-percent of the staff and faculty are also back on campus. In two weeks there will be an evaluation to consider return 50-percent capacity.