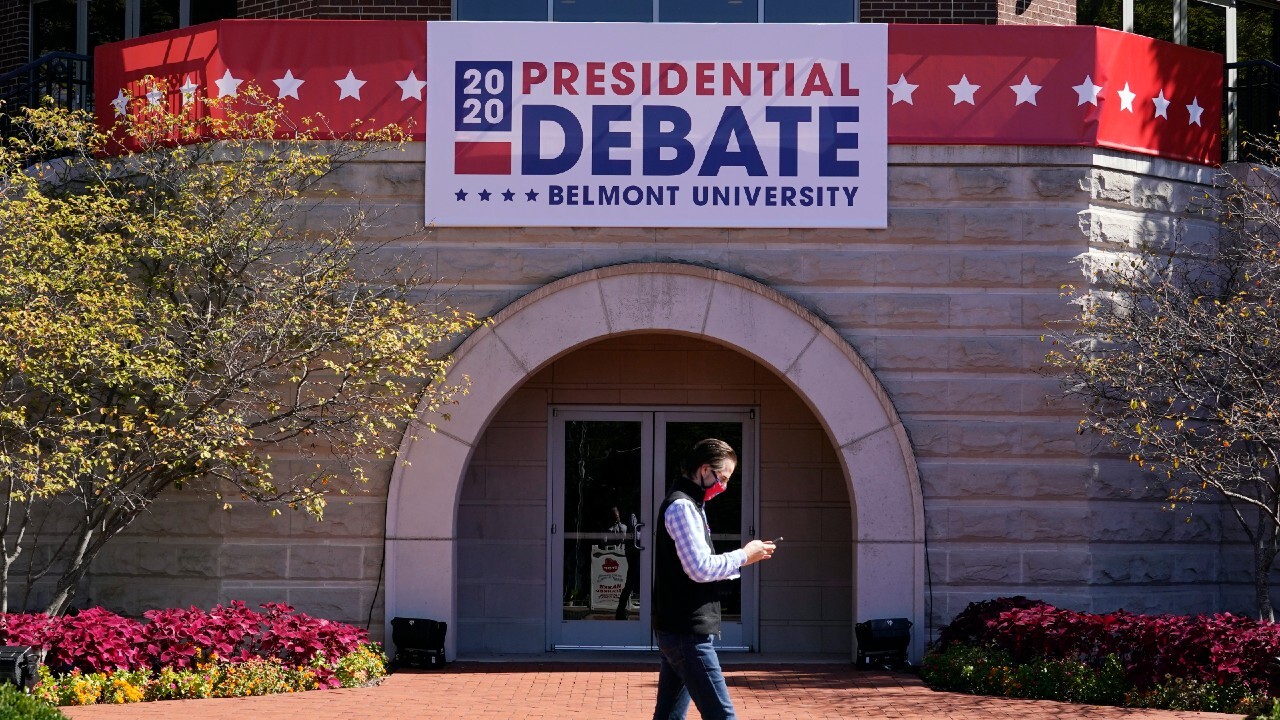 AP Photo/Mark Humphrey
The Curb Event Center at Belmont University is decorated for the presidential debate Friday, Oct. 16, 2020, in Nashville, Tenn. The final debate between President Donald Trump and former Vice President Joe Biden is scheduled to be held at the university Oct. 22.

NASHVILLE, Tenn. – The second and final debate of the U.S. presidential election will be held at Belmont University in Nashville, Tennessee, starting at 9 p.m. ET on Thursday, Oct. 22.

Originally, the Commission on Presidential Debates scheduled three forums between the candidates. The second debate, which would have been held town hall style, was canceled after President Donald Trump declined to participate when the commission announced the debate would be held virtually due to Trump's recent coronavirus infection.

The debate will be moderated by Kristen Welker, a White House correspondent for NBC News and co-anchor of “Weekend TODAY.” It will be Welker's first general election debate she has moderated, but she co-moderated the fifth Democratic debate during the 2020 primary season.

President Donald Trump and former Vice President Joe Biden plan on participating in the debate. No other candidates, like Libertarian Jo Jorgensen, qualified to take part in the debate, based on the Commission on Presidential Debates’ candidate selection criteria.

What will be discussed?

Earlier this week, Trump’s campaign manager, Bill Stepien, claimed the CPD had “promised” that Thursday’s debate would be about foreign policy and asked for Welker’s topics to be discarded. However, CPD responded and said “no debate in 2020 was ever designated by (the commission) as devoted to foreign or domestic policy."

With that said, the president is expected to still grill Biden on his son Hunter’s business ties, as well as his foreign policy record in the Obama administration and as chairman of the Senate Foreign Relations Committee, The Washington Post reports.

How will the debate be structured?

After the first debate went off the rails, because the candidates constantly spoke over each other, the CPD announced changes Monday to “ensure a more orderly discussion.”

As with the first debate, both campaigns have agreed to allow each candidate two minutes of uninterrupted time to make remarks at the beginning of each 15-minute segment of the debate. This time, however, “the only candidate whose microphone will be open during these two-minute periods is the candidate who has the floor under the rules,” the CPD said in a statement. Both mics will then be turned back on for an open discussion.

What is being done to protect against coronavirus?

The commission says Trump and Biden will again skip the traditional handshake before the debate starts and the audience will be required to wear masks.

How can you watch?

The debate will run for 90 minutes without commercial interruption. You can watch it live on our Facebook page, as well as on network and cable news channels.

Where the race stands?

Polls show Biden as the frontrunner in the national popular vote, leading most national polls by a 6 to 10 percent margin, but his margin in many battleground states is slimmer. Polls in a number of battleground states, such as Ohio, Iowa, Florida, and North Carolina, are within the margin of error, according to an aggregate of polls by Real Clear Politics. Biden is maintaining slight leads in Michigan, Pennsylvania and Wisconsin, which if he wins in addition to the states won by Hillary Clinton in 2016, would give Biden a victory.

All that will stand between Thursday's debate and Election Day is 11 days of early voting and the candidates' final appeal to voters.