Copyright 2020 The Associated Press. All rights reserved.
Tony Dejak/AP
Voters wait in line to participate in early voting at the Cuyahoga County Board of Elections, Tuesday, Oct. 6, 2020, in Cleveland. (AP Photo/Tony Dejak)
By: Scripps National
Posted at 4:45 PM, Oct 15, 2020

In an election year in the middle of a global coronavirus pandemic, a new study finds the majority of Americans, about 80 percent, are confident in-person polling places will be run safely.

Survey respondents also seem to agree that it is important for Americans to learn who won the election within a day or two of Election Day, about 82 percent, but only about 50 percent feel confident this will actually happen.

Other questions asked on a recent Pew Research Center study appear to have strong partisan divisions. 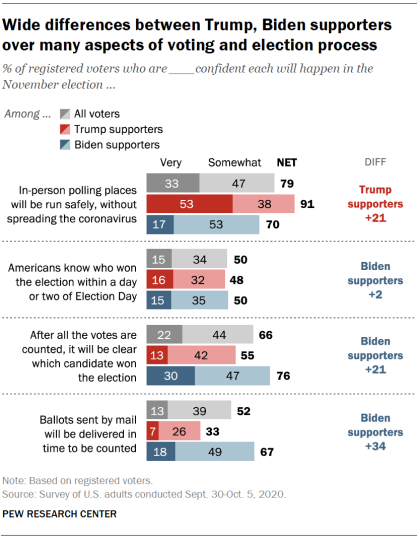 Roughly 20 percent of both Trump supporters and Biden supporters reported they had already voted or planned to vote in-person during their state’s early voting.

The sides also differ on their feelings about how Election Day will be administered around the country. About 90 percent of all survey participants have confidence in their local community elections to be run well.

The survey was conducted the first week of October, talking to more than 11,900 American adults.