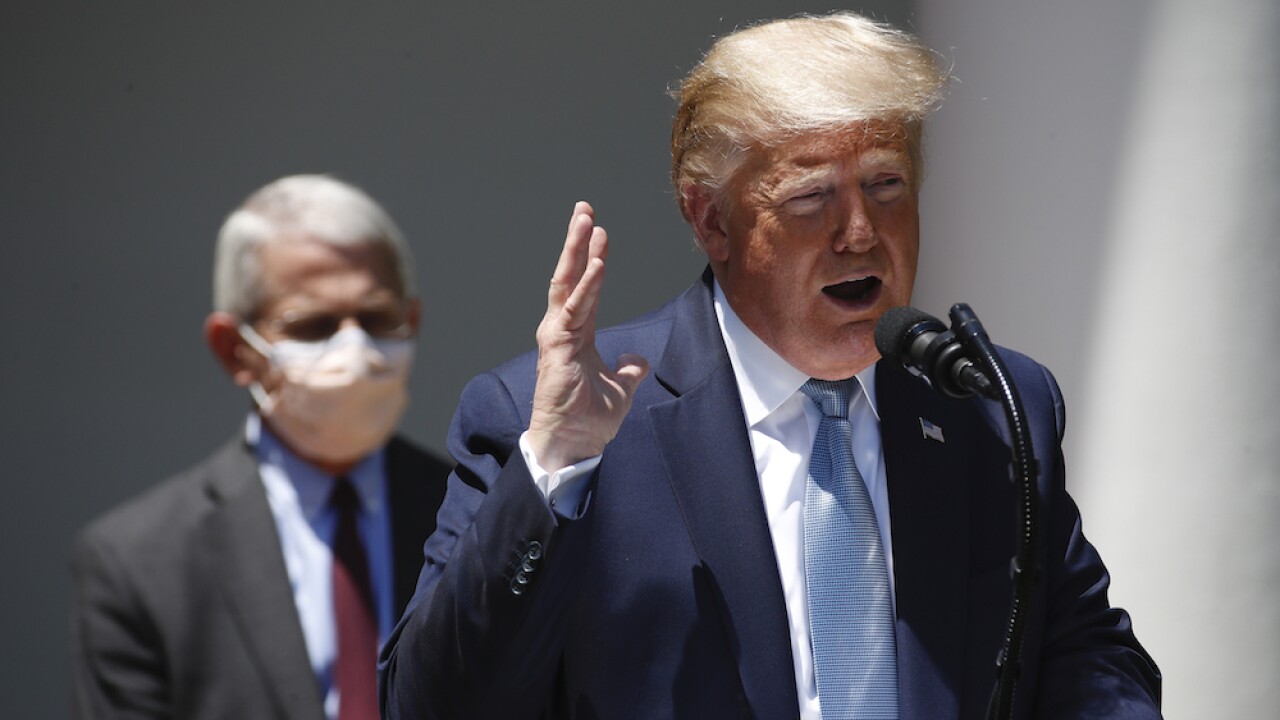 Copyright 2020 The Associated Press. All rights reserved.
Alex Brandon/AP
President Donald Trump speaks about the coronavirus in the Rose Garden of the White House, Friday, May 15, 2020, in Washington. Director of the National Institute of Allergy and Infectious Diseases Dr. Anthony Fauci listens at left. (AP Photo/Alex Brandon)

President Donald Trump publicly attacked Dr. Anthony Fauci — his administration's top expert on infectious diseases — just days after Fauci criticized the president's campaign taking a March interview of his "out of context" and using it in a campaign ad.

Trump's message came in a quote tweet of a Sunday CNN article in which Fauci confirmed a recent Trump campaign and took him "out of context."

The ad, which touts Trump's efforts in fighting COVID-19, features a quote from Fauci during an interview on Fox News.

Actually, Tony’s pitching arm is far more accurate than his prognostications. “No problem, no masks”. WHO no longer likes Lockdowns - just came out against. Trump was right. We saved 2,000,000 USA lives!!! https://t.co/YyLyCsbZ7a

"I can't imagine that anybody could be doing more," Fauci said.

Though no date is provided on the quote, the interview occurred in March and was clipped from a longer passage in which Fauci praised the entire White House coronavirus task force.

"In my nearly five decades of public service, I have never publicly endorsed any political candidate. The comments attributed to me without my permission in the GOP campaign ad were taken out of context from a broad statement I made months ago about the efforts of federal public health officials," Fauci said in a statement to CNN.

Trump also referenced Fauci's recommendation from February that Americans not wear masks to protect themselves and others from COVID-19. Fauci and other health experts did initially recommend against the use of masks out of fear that an already depleted stockpile of surgical masks would be wiped out. Fauci has said that once it became clear that the virus was spreading from patients with no symptoms and that reusable cloth masks helped mitigate spread, he changed his recommendation.

Fauci has also since admitted that early mixed messaging on masks "was detrimental in getting the message across."

Trump's tweet comes as COVID-19 cases in the U.S. are rising across the country ahead of the winter months.