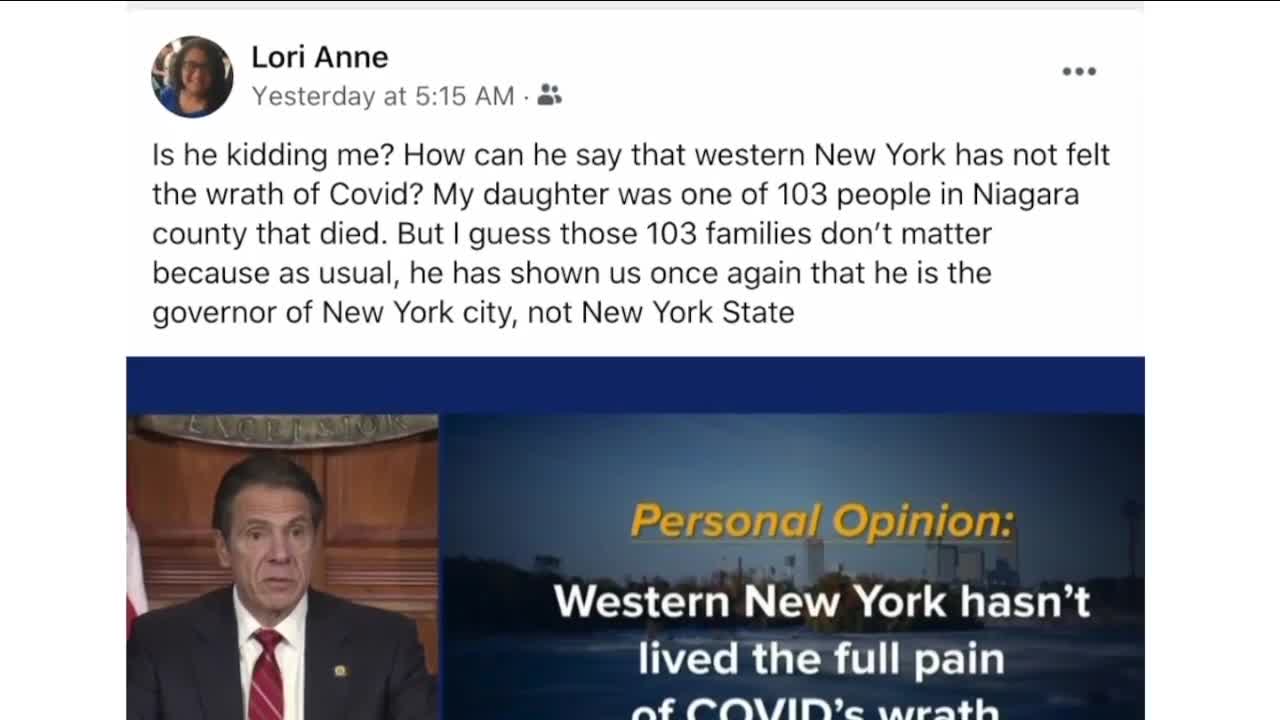 WHEATFILED, NY (WKBW) — Governor Andrew Cuomo’s words from a news briefing earlier this week are not sitting well with a Wheatfield woman who lost her daughter to COVID.

“How can he even say something like that? If it was his child I bet he wouldn't say anything like that,” declared Lori Salvatore.

By early July, she lost her battle. The virus destroyed her lungs and she needed a double lung transplant.

It was part of his news briefing Wednesday when he announced much of Erie County was becoming an orange zone because of surging numbers.

The remarks were also listed on a graph use during the statewide news conference.

Salvatore was not pleased, reflecting on how she couldn’t even visit her daughter during the height of the pandemic last spring.

“She fought this — this awful virus alone — so if that's not fear — if that's not feeling the wrath — my whole family had goosebumps, was on eggshells, just praying and waiting for her to get better” Salvatore recalled.

Salvatore posted on facebook that 103-people have died from the virus in Niagara County and that Cuomo is only governor to New York City.

“I feel like he he's just dismissing what these families are even going through,” replied Salvatore. “It doesn’t mean that our feelings are any less than those in different counties. I have family in Westchester County and they to went through the covid pandemic with my daughter like we did.”

Salvatore says as cases are spiking in the region she sees how people are not following guidelines.

“They have their mask up to here and their noses hanging out, some people just don't wear masks and — it’s disgusting,” remarked Salvatore.

“If we don't stop it — we are going to overwhelm our health care system,” stated Dr. Kevin Gibbons, senior associate dean for clinical affairs, UB’s Jacobs School of Medicine.

Gibbon’s is tracking the sharp rise of covid hospitalizations in the area.

Gibbons said your chance of catching covid is significantly higher now than it was last spring.

“And you hang out with 20 people — guess what one or two people have the disease at the beginning of that party and a week later there's going to be more people who attended that party with the disease,” explained Gibbons. “We got away with things when the disease prevalence in our community was less than one percent — that we cannot get away with now.”

Gibbons said he recently spoke to a primary care doctor and emergency room doctor and both described witnessing the growth of the virus in the community.

The ER doctor noted that after an eight hour shift, he treated a number of COVID cases.

“He saw ten patients with proven COVID, five of whom needed to be hospitalized,” Gibbons said.

Salvatore said she wants the public to pay attention to the warnings, but not the way the governor handled it.

“What would you say to the governor right now?” Buckley asked.

“I would say to him — Governor Cuomo - I did everything right — I taught my kids with God and guidance and during the shut down we were scared and it didn't stay away from us,” responded Salvatore. "My daughter caught it and now she’s gone. I just wish you had some empathy for us."

Salvatore said she never wanted her daughter to be a statistic, but now that she is — she wants everyone to understand just how deadly this virus can be.