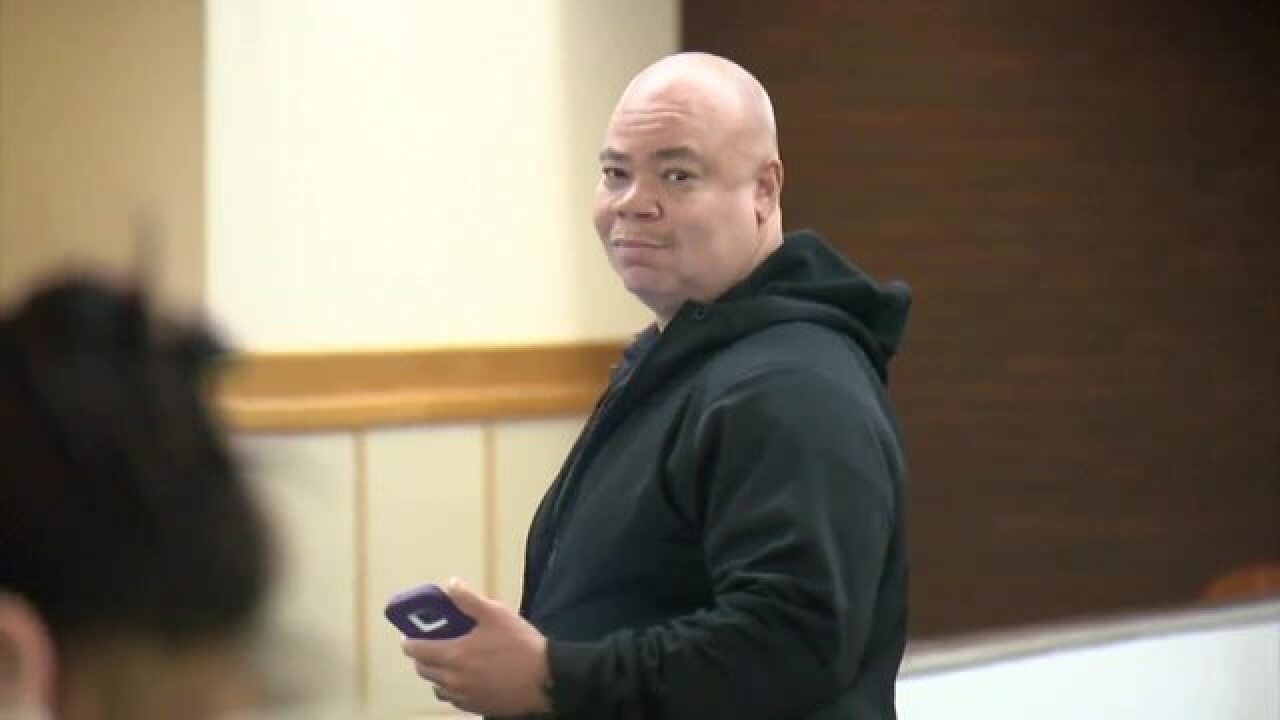 Littlejohn smirked at our camera as he strut into the courtroom.

For the first time, we're hearing from the man who says he was assaulted by Littlejohn, outside the old Sinful night club.  It's now called Waiting Room, on Delaware Avenue in Buffalo.

Derrick Anderson says he was punched at least twice by Littlejohn, who was off-duty, working security at the bar in January, 2013.

The two punches were recorded by the bar's surveillance camera system.

Even though he was off-duty, Littlejohn admits to wearing parts of his Buffalo police uniform.  In court documents obtained by 7 Eyewitness News, Littlejohn said he was wearing his department issued hat and jacket.  That is a violation of department rules.

Anderson said he thought Littlejohn was working in his official capacity, as a Buffalo police officer.

"If he wasn't on duty, he definitely wanted to intimidate people for them to believe he was on duty," Anderson said.

"[Patrons] treat us differently than they would treat security," Littlejohn said.  "...we have more authority."

In on the record testimony, Littlejohn asked why he was wearing parts of his uniform, even though he was off-duty working security.

Shatonya Garrison was outside the club while Anderson said he was assaulted.  She is one of three eyewitnesses who've come forward, saying Littlejohn was the aggressor in this altercation.

"They probably use their authority a little too much," Garrison said.  "It was very shocking to see Buffalo police in particular, to see them hurting someone."

Now, through court documents, we've learned Littlejohn was charged with departmental violations in connection to this alleged assault, by Internal Affairs.  It's unclear if Littlejohn was ever disciplined.

"I didn't give him a chance to hit me"

'The other guy' is John Case.  Case claims he was also assaulted by Littlejohn last year, at Michigan and Riley, in what amounts to a case of road rage.

"I stepped out of the truck and was standing right here," Case demonstrated.  "He grabbed me by the throat and slammed me straight back, breaking the window out."

Littlejohn is facing a civil lawsuit in connection to that case.  We found him in Buffalo City Court for a hearing on the matter.  He refused to answer our question and pushed our reporter out of the way.

In deposition testimony, Littlejohn said he gave Anderson "a little push," while he was being escorted out of the club.

"He turned around, faced me like he ws going to hit me," Littlejohn testified.

"Okay.  Did he hit you," questioned Anderson's attorney.

"I didn't give him a chance to hit me," Littlejohn answered.

Littlejohn claims he was threatened and was defending himself, after Anderson said "I'm going to knock you the f--- out," if he was touched again.

Anderson said he was never going to hit the officer, but turned around in the video because, he didn't "want to get in a big brawl with this guy, but I have to face him...I didn't want him to attack me from behind..."

Garrison, the eyewitness, said Anderson was never a threat to the officer and believed excessive force was used.

After Anderson turned around, he said Littlejohn grabbed his $4,000 necklace and broke it off.  The pieces scattered on the ground.  It was jewelry Anderson bought after winning a prior, unrelated lawsuit.

"I'm from the inner city of Buffalo," Anderson said.  "I was more concerned about maybe some gangster guys coming to take my jewelry, but it was crazy that it was the Buffalo police, " Anderson said.

Despite all of these claims, Littlejohn has not been charged with a crime and is still on the job.

Last year, Littlejohn collected a taxpayer-funded salary of more than $120,000, according ot the Empire Center, a non-profit state government watchdog.

That leaves Anderson questioning why Littlejohn is still on the force.

"If there's a situation at my house, we got to be worried about calling the police because Littlejohn is still working and he might pull up to my house.  It's scary," Anderson said.

Anderson's attorney has questioned, in court documents, why Littlejohn wasn't ever arrested for assault.  The officer denies there was ever any assault, however.

We tried asking questions about this and the two lawsuits, considering the city of Buffalo is named in one of them, but a spokesman said they will not comment on pending litigation.