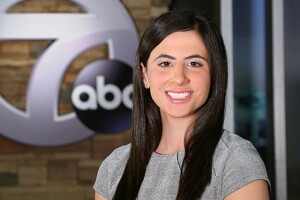 Gilat Melamed is a multimedia journalist at 7 Eyewitness News in Buffalo. She joined WKBW in June 2019.

Gilat Melamed realized her passion for reporting during her freshman year at CitrusTV, Syracuse University’s student run television station. She also anchored the evening news and hosted a political news show for the station.

During her four years at the S.I. Newhouse School of Public Communications, Gilat had the opportunity to go on reporting trips to Israel and Ukraine (not to mention try some really good hummus and pierogies). Outside of Newhouse, Gilat interned with WNBC-TV in New York, Spectrum News in Syracuse, and NBC Olympics.

The Queens, New York native is excited to continue reporting in her home state. Gilat loves the outdoors, which includes going to the beach in the summer and skiing in the winter. She’s eager to explore everything from the restaurant scene in downtown Buffalo to the nature scene across Western New York.