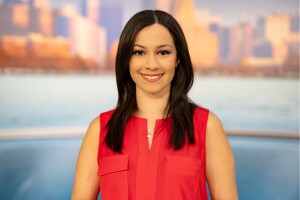 Ala Errebhi joined the 7 Eyewitness News morning team as a multimedia journalist in February 2019.

Ala graduated from California State University, Northridge with a Bachelor's in Broadcast Journalism and a focus on Political Science. She worked as a producer at the university's radio station, 88.5 KCSN, helping put together the weekday half-hour show, the Evening Update. She helped produce a show that won a Golden Mike award in 2016.

Her second job in the broadcast field brought her to KTTC-Newscenter in Minnesota, where she worked as a multimedia journalist. There, Ala worked as a reporter, anchor and producer and covered anything from crime and breaking news to agriculture and local elections.

Ala is a dual citizen of Tunisia and the United States. She’s fluent in Arabic and has working knowledge of German and Korean. She's a die-hard Bayern Munich fan and believes they're the best soccer team in the Bundesliga (don't fight her on this one).

Feel free to email her with story ideas at ala.errebhi@wkbw.com