How much snow fell in your area? Find out here and why

Nature sure did dump a lot of snow across Western New York over the past few days.

The same system that brought blizzard conditions and severe weather to the Midwest helped usher in colder air into Western New York Tuesday and Wednesday.

Colder air flowing over a 'warm' Lake Erie and Ontario, coupled with plenty of moisture in the low to mid levels and winds aligned allowed for the lake effect snow machine to get going.

The slopes in ski country didn't need to turn on the snow guns. You folks needed the snowblowers to dig yourselves out.

Lake Effect continued to pile it on south of Buffalo Tuesday night through Wednesday afternoon. At times, some areas were seeing up to two inches per hour.

Here are some of the snow reports from across your area thanks to the National Weather Service.

As you can imagine, once the lake effect snow machine starts, it's hard to shut it down.

There were also impressive snow totals in the Southtowns too.

Elevation played a key role into how much more snow fell on the hills compared to the Southtowns. The higher the elevation, the more snow you likely got. You can see the difference in snowfall totals by looking at this snowfall analysis map produced by NOAA. 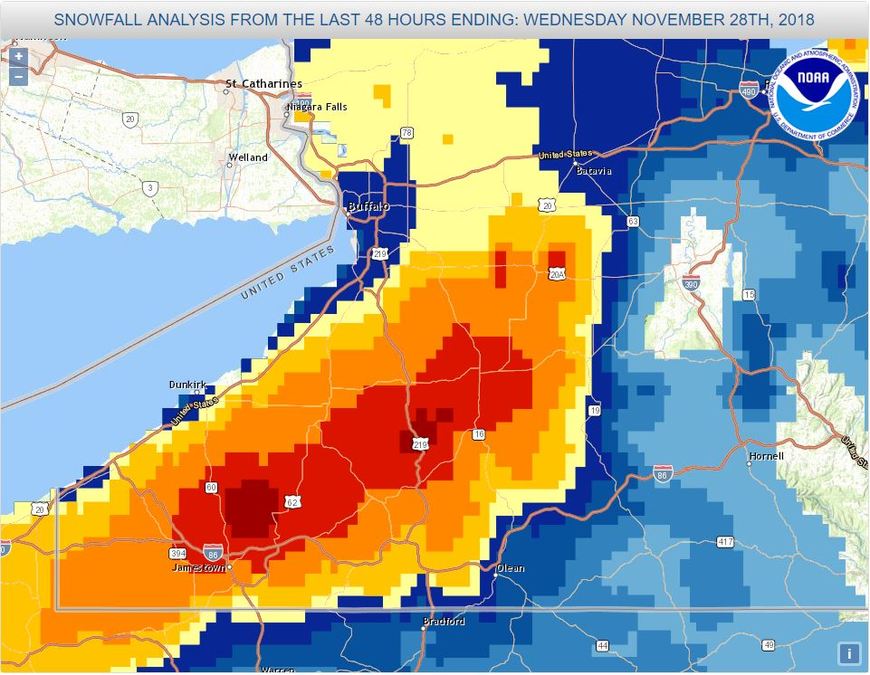 We didn't forget about you Northtowns. It took you a little longer for the snow to stick to the ground.

Temperatures during the day were favorable for wet flakes with some rain occasionally mixing in at times. Colder air at the surface allowed for a more favorable snow profile late Tuesday night into Wednesday morning.

A shift in wind direction early Wednesday pushed steadier bands of lake snow over Lake Ontario through Niagara and Orleans County. Lake Huron too played a small role, throwing some lake effect snow our way too. That's why you had to get out the shovel Wednesday morning.

You can find more snow totals courtesy of the National Weather Service.