WNBA president lauds activism, wishes it was kept off court 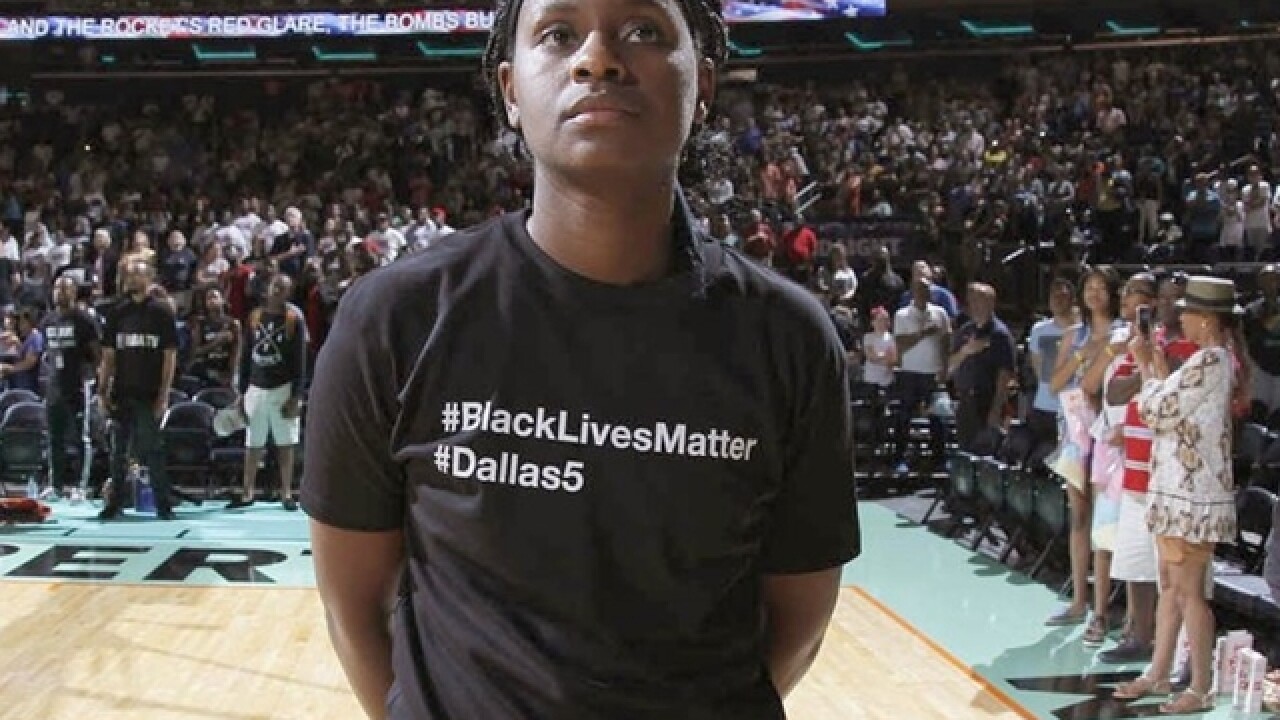 NEW YORK (AP) — WNBA President Lisa Borders applauds the league's players for taking a stance on social issues. She just wishes the activism was kept off the court.

Borders spent the past two weeks talking with the union and its executive council, trying to come up with ways that both the league and its players could constructively address the Black Lives Matters movement. Nothing concrete was decided.

"We were making every effort to engage our players," she told The Associated Press by phone Friday night. "We made an effort to support them and we were trying to get them to come to the table to have a conversation. The players have an open invitation with the league.

"Our players are important to us. We believe in them. We want them to be the people they are and we're proud of them. We want to make sure they play well on the court and they are happy off the court."

On social media and in postgame interviews, players are showing their solidarity after the league fined the Indiana Fever, New York Liberty and Phoenix Mercury players $500 each this week for wearing plain black warmup shirts that violated the league's uniform policy. The normal fine for a uniform violation is $200. Each team also was fined $5,000.

The Rev. Al Sharpton said Saturday his organization, the National Action Network, will pay the $500 fines. He called the penalty unacceptable."

Washington Mystics players had shirts saying "Black Lives Matters" in the locker room after their game Friday night. Seattle Storm and Minnesota Lynx players tweeted out pictures of their teams wearing black T-shirts featuring a Martin Luther King Jr. quote before their game. They didn't wear those shirts on the court to avoid getting fined.

"We're sick and tired of waking up every morning and seeing something like this (shootings) happen," Mystics player Ivory Latta said after her team played its final game before the Olympic break. "We need change and we have a platform to speak. Don't tell us we have a platform and then you penalize us for our platform for speaking and showing our actions. That's not right."

Borders, who has been on the job for four months, disagreed with the notion that the league was suppressing its players' voices following the shootings by and against police officers.

"We want the players to know that we have supported them in the past, support them today and will continue to support them in the future," she said. "We're not trying to stop them from expressing themselves."

The league just doesn't want them to do it on the court if it violates the WNBA uniform rules. The shirts that the players were fined for wearing were the Adidas brand — the official outfitter of the league. WNBA rules state that uniforms may not be altered in any way.

"The Adidas black shirts are not regulation," Borders said. "They are sponsor appropriate, but the Adidas plain black shirt would not be a regulation-issued shirt."

The union felt it was unnecessary for the league to issue a memo this week reminding the players of the uniform policy. Because of that memo, the players and union weren't surprised by the fine. They were just disappointed.

"This isn't about a shirt, but that was the starting point," Terri Jackson, the new operations director of the WNBA Players Association, told the AP. "The players want to blog about (Black Lives Matter), tweet about it, do videos. They want to raise visibility and keep the conversation going. They don't want this to die out."

Jackson said the union's legal team is looking into what it can do about the fines, which she called excessive. She said the union proposed letting the players have a limited time to express their opinions on the court.

While the league begins its monthlong break Saturday, its top players will be playing in Rio at the Olympics. U.S. coach Geno Auriemma said he was proud of their social activism.

"I respect Tina (Charles) and the players in the WNBA for their concern and their voices and the passion that they have and for their beliefs. I really do," he said, citing the Liberty star for wearing her warmup shirt inside-out Thursday. "I'm really proud of some of my former players and the way they've stepped forward and spoken their conscience and express their feelings."

The league was still undecided on whether Charles would be fined.

Auriemma said if players take actions at the Olympics it would be a difficult balancing act.

"As far as USA Basketball is concerned, you know, that's a very delicate subject," he said. "Obviously each player has an opportunity to be who they want and say what they feel, but at the same time, you are representing the United States of America, and you are part of the Olympic team. ... I'm sure it'll come up, and we'll have to deal with it." He said the matter would largely fall to U.S. Olympic and basketball authorities.

Both the league and the union hope for constructive conversations during the break. Borders said she'll be in Rio for two weeks but will participate in the monthly conference call between the two groups on Aug. 1. She missed the one on July 11 when the shirts initially were discussed.

"I love this league and its players. I'd never do anything to harm the league, franchises or players," Borders said. "I want them to understand we're here to support them. We've hit a bump in a road. This too shall pass."