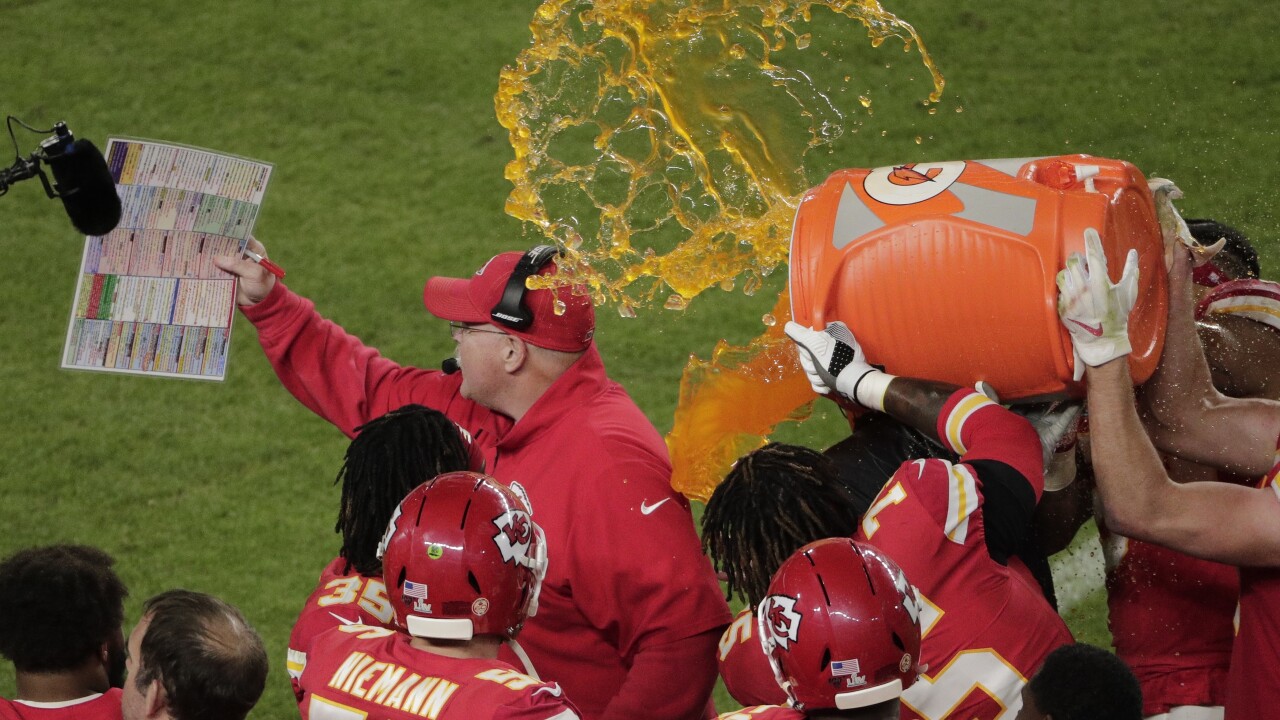 After the Chiefs’ fourth-quarter rally to top the San Francisco 49ers 31-20 in the Super Bowl, giving the team its first championship in 50 years, many took to social media to share in the excitement with Chiefs Kingdom.

Congratulations to the lil bro @MecoleHardman4 and the @Chiefs on your Super Bowl win!! 💪🏾💪🏾💪🏾 that’s how you @ROCKTHEBELLS !!! #SuperBowl #SuperBowl2020 pic.twitter.com/IrpWpJTwm2

Mayor Quinton Lucas said it sounded like a good time to have a parade. The Chiefs Kingdom Champions Parade will be held at 11:30 a.m. Wednesday in downtown Kansas City.

Comedian Rob Riggle, an Overland Park, Kansas native, said he was at "a loss for words" after watching the Chiefs win.

I’m at a loss for words after an amazing week! Starred in a commercial for the #QuickerPickerUpper ✅ Traveled to Miami ✅ Waited my whole life to watch the Chiefs WIN #SBLIV ✅ QUICK! Somebody pinch me... I'm the @Bounty man. ✅ #BountyPartner 😏 pic.twitter.com/DgXEHJ0Arg

Rep. Emanuel Cleaver, who represents Missouri’s 5th District, including Kansas City, said the victory was 50 years in the making.

The @chiefs are bringing home the Lombardi Trophy! 50 years of hard work, dedication and loyal fans have paid off. I look forward to seeing all of #chiefskingdom this week at the well deserved celebration parade! #SuperBowlChamps pic.twitter.com/mJMkZJBMJh

And Gov. Mike Parson said, “It was meant to be.”

Here’s a look at what others were tweeting in the moments after the game:

WE DID IT, KANSAS CITY! The @Chiefs are #SuperBowlLIV CHAMPIONS!! Celebrate responsibly, Kansas City, and we'll see you at the parade! (More details will be forthcoming, but it's gonna be awesome.) pic.twitter.com/Df10ZfPzPS

Congratulations to the @Chiefs on a great win over the 49ers in Super Blow LIV! You’ve made Missouri proud. Time to bring that trophy home #WeServeMo

For those of us who grew up in #ChiefsKingdom , the wait has been long, but I have to say, I’m glad this win came when I could share it with my boys!

What a team. What a run. What a city.

Congratulations to @Chiefs on your SUPER BOWL VICTORY!!!!!!! We ♥️💛 you! Celebrate safely everyone!! #ChiefsKindgom #superbowlchampions pic.twitter.com/q92CHApYqS

CHAMPS!!!! Celebrate responsibly from your friends at OPD!!!!!!! @PatrickMahomes

Congratulations to the Kansas City Chiefs on a great game and a fantastic comeback under immense pressure. We are proud of you and the Great State of Missouri. You are true Champions!

Congratulations to the Chiefs and all their fans! Happy for Coach Reid especially.

Congratulations to the Kansas City Chiefs on a great game, and a fantastic comeback, under immense pressure. You represent the great State of MISSOURI! And, in fact, we are PROUD OF YOU!

This story was originally published by KSHB in Kansas City, Missouri.