Three Observations: Sabres are shut out by New York Islanders 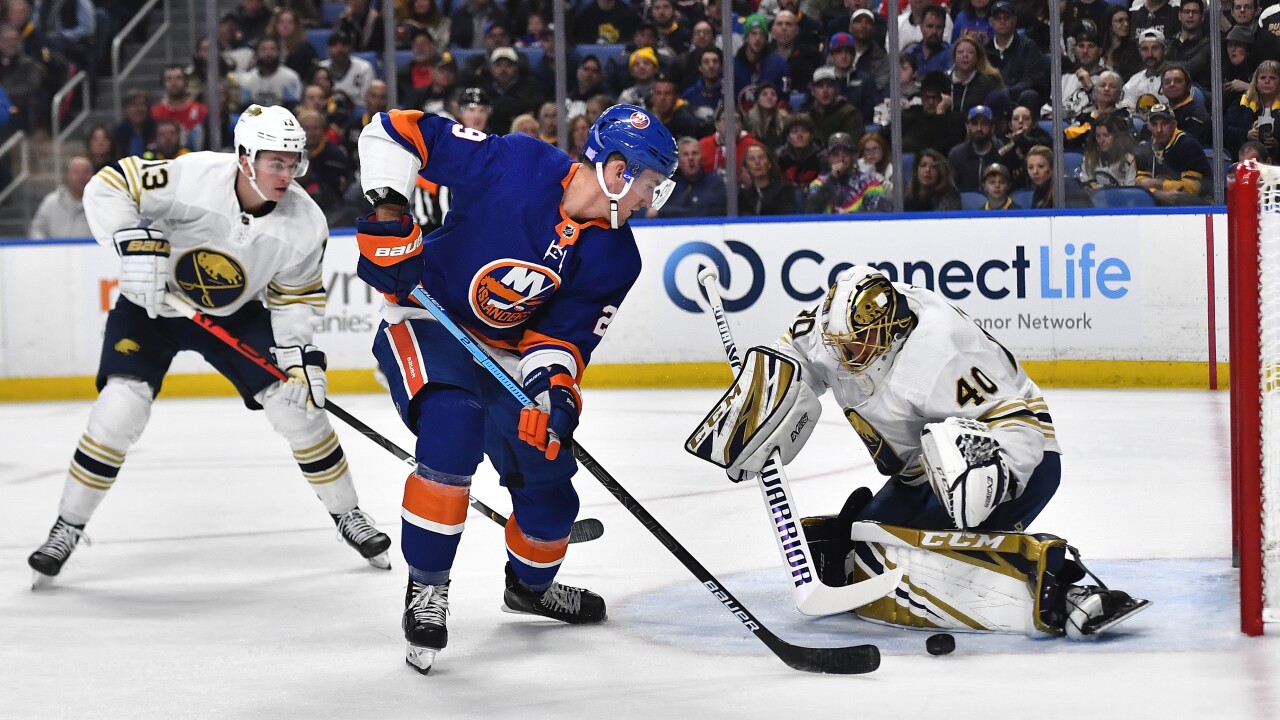 BUFFALO, N.Y. (WKBW) — Derick Brassard's first period goal that was banked off Carter Hutton was all the New York Islanders needed on Saturday night. Here are three observations from the Buffalo Sabres' 1-0 loss to the Islanders:

The return of Brandon Montour presented a bit of a predicament for the Sabres' head coach: The pairings he had were all harmoniously a left shot-right shot combination. But Montour couldn't be left off the ice. The result saw Montour with Rasmus Dahlin and a pair of right shots together in Henri Jokiharju and Colin Miller.

Krueger's coaching experience in Europe led to a comfort level with same-shot defensemen being put together. He's talked about facing a lack of right-shot defensemen across the pond, so tonight's pairings were the antithesis of what he was used to.

Overall, the look was solid. Along with Jokiharju and Miller being together at even strength, Montour and Miller were on the ice together for the penalty kill. The one shortcoming of same-shot pairings that was evident tonight was pinching in the offensive zone on the off-stick side. With practice, if these are the Sabres' top six defensemen moving forward, that can be corrected.

2. Brandon Montour is here to stay.

Between last year's MCL injury and his hand injury prior to the start of the regular season, it could be easy to forget the impact that he has on the ice. He was making smart plays in the offensive zone and wasn't afraid to get in front of shots when the Sabres were shorthanded. He also reminded the KeyBank Center of his powerful shot when he rang one off the iron in the second period.

Last year, the addition of Montour via trade was a breath of fresh air for the struggling Sabres. This year, he's another piece of a defensive puzzle that has held strong in front of both of its goalies to start the 2019-2020 season. The fact that Krueger doesn't shy away from same-shot pairings also bodes well for all of the right-shot defensemen on the Sabres.

3. Victor Olofsson still has plenty of growing to do as an NHL player.

The Sabres' forward shake-up placed Olofsson alongside Jeff Skinner and Marcus Johansson tonight. This isn't meant to take away from Olofsson's recent accolade of rookie of the month, but without his all-star caliber, pass-first linemates of old, the rookie struggled to create his own opportunities in the offensive zone at even strength.

Olofsson didn't get a shot on goal all night. And as a player who's known for his shot within the Sabres' organization and, to a certain extent, around the league, that can't become a trend. He was still putting himself in good position on the blue and gold's power play unit, but he needs to create chances for himself-- instead of turnovers-- at even strength.

The Sabres have nearly a whole week before their next game, but a majority of that time will be spent across the pond. They play the Tampa Bay Lightning in back-to-back games on Friday and Saturday in Stockholm, Sweden for the NHL Global Series.