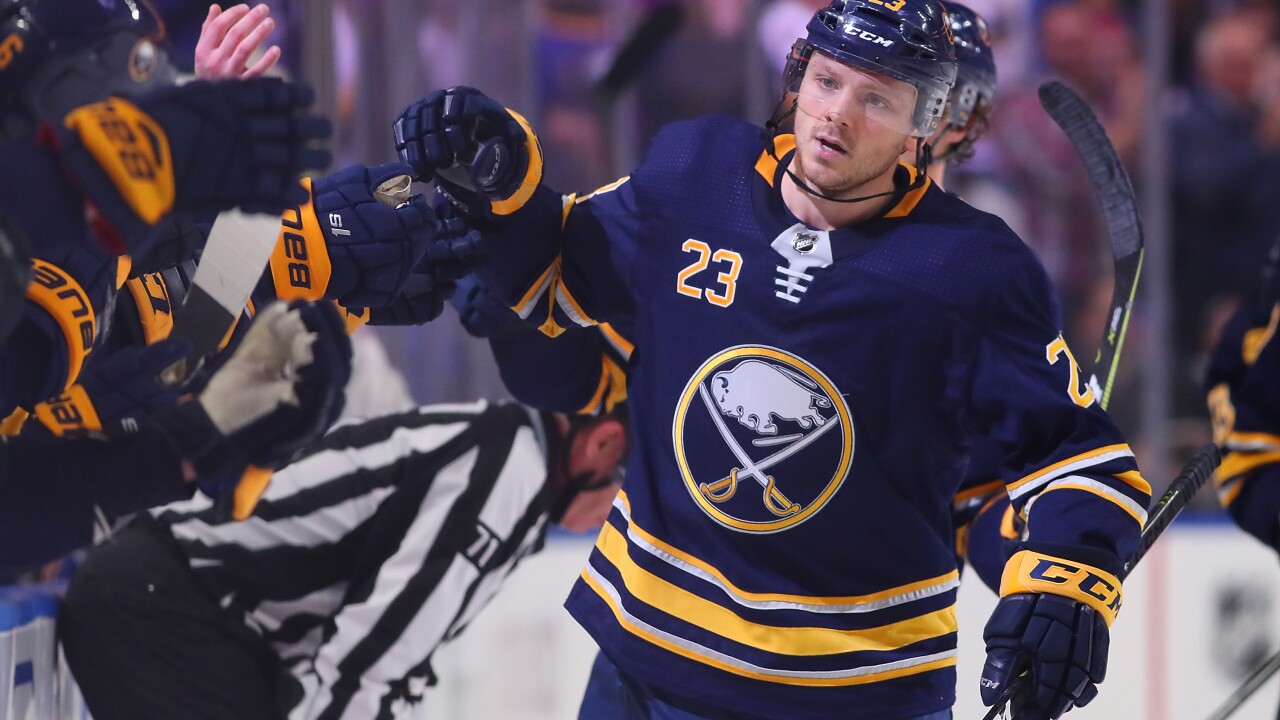 BUFFALO, N.Y. (WKBW) — The Sabres ran the deepest lineup that they have all preseason. And the result at the KeyBank center tonight showed it as the Sabres beat the Maple Leafs 5-3.

All six defensemen and at least nine of the twelve forwards have a legitimate shot at being in Buffalo to stay next month. With a lot of in-game exposure to several big name Sabres, here are three observations from tonight's game:

Yes, it's the preseason. So this is especially common. But Krueger made a point that he wanted to break up the lines, keep everybody shuffling, and let players gel with different teammates. And that approach won't stop at the end of the preseason.

Jeff Skinner, Jack Eichel, and Sam Reinhart all dressed together tonight. But the only time they were all out on the ice at the same time was on the powerplay. We'll get to that in a minute.

Eichel and Reinhart stayed together and were joined by former New York Ranger Jimmy Vesey on the left wing. Skinner, meanwhile, was on a line with seventh overall pick Dylan Cozens and Evan Rodrigues. It's early, and lines are always subject to change, but Krueger has stayed dedicated to his original plan.

2. The regular season power play unit might have made its debut.

So the only time Skinner, Eichel, and Reinhart were on the ice together was on the powerplay. The two of them were joined by Victor Olofsson, whose shot has proven time and again to be lethal every time he steps onto the ice, and former first overall pick Rasmus Dahlin.

The 19-year old Dahlin still has some mental growth to do as a power play quarterback. But the Sabres weren't afraid to test skip passes across the slot from Eichel to Olofsson. At times, they went back and forth through the Leafs' penalty killers. They also converted on the look on Olofsson's second period goal.

As far as shots on the wing, it doesn't get much better for the Sabres than Eichel on the left and Olofsson on the right. With such a deep roster that dressed tonight, this very well could have been a dress rehearsal for the regular season power play unit.

The Sabres' biggest splash in free agency brings a veteran presence to the locker room and a net presence, among other things, to the ice. He also brings versatility as someone who's played all three forward positions.

Johansson was the third line center behind Eichel and Dylan Cozens. Should Cozens return to the WHL, Johansson could find himself at center in the regular season, especially if the injury bug hits or if Casey Mittelstadt isn't ready to take on top six minutes.

He held his own on faceoffs. But aside from John Tavares on the top line, the competition at the dot wasn't exactly eye popping. However, once the puck was in play, Johansson would gravitate towards the half boards and force one of his wings into the middle.

Playing center is something that Johansson is capable of, but after serving primarily as a wing in Washington, New Jersey, and Boston, it's something he'll need more time to truly adjust to.

The Sabres' preseason continues on Wednesday when they host the Columbus Blue Jackets at 7:00 p.m.