Three Observations: Between the pipes, defensive pairings, and Evan Rodrigues 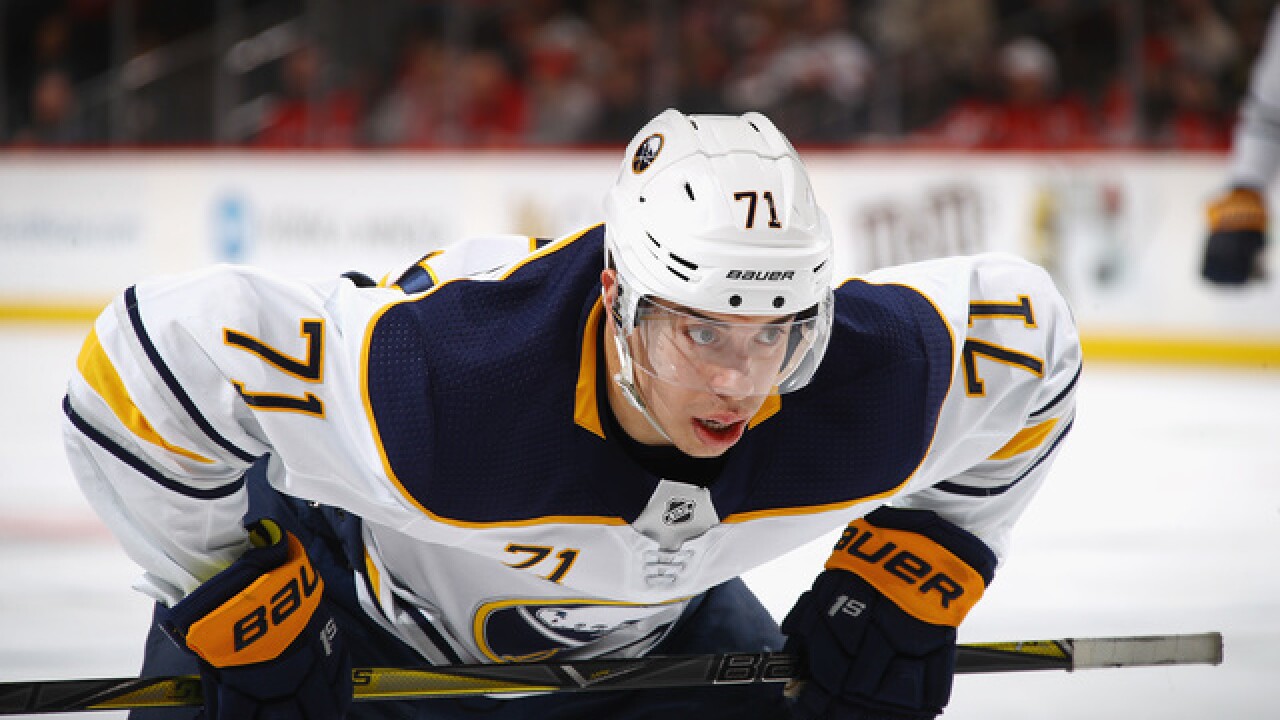 Copyright 2018 Scripps Media, Inc. All rights reserved. This material may not be published, broadcast, rewritten, or redistributed.
Bruce Bennett
<p>NEWARK, NJ - DECEMBER 29: Evan Rodrigues #71 of the Buffalo Sabres skates against the New Jersey Devils at the Prudential Center on December 29, 2017 in Newark, New Jersey. The Sabres defeated the Devils 4-3 in overtime. (Photo by Bruce Bennett/Getty Images)</p>

BUFFALO, N.Y. (WKBW) — Preseason hockey has come to a close for the Buffalo Sabres. Split rosters and deep lineups have showcased the additions to the organization and the growth within it. But this was the last game action that 10 skaters and one goalie will see in Blue and Gold, at least for now.

As of Saturday's game against the Pittsburgh Penguins, the Sabres still have 18 forwards, 13 defensemen, and three goalies on their roster. That number will dwindle in the coming days, but from the lineup that Buffalo produced against the Pens, here are three observations from today's shootout win over Pittsburgh:

1. The goalie competition continues; and that's bad for Carter Hutton:

The performances of both returning Sabres' netminders throughout the past few weeks should be taken with a grain of salt considering the irregularity of the competition that they face. But when the Sabres reported to training camp earlier this month, Ralph Krueger made it very clear: Carter Hutton wasn't guaranteed the starting job.

Linus Ullmark has capitalized on the opportunity that has been presented to him. In two appearances prior to today's game, Ullmark saved 18 of 19 shots that he faced and only allowed one goal. On Saturday against the Penguins, he nearly matched those numbers in a full game of ice time with a .944 save percentage and two goals against, along with five saves in the shootout.

The second goal he allowed was a soft one. There's no denying that. But Ullmark's rebound control looks improved compared to last season. And with the added talent in front of him, should Ullmark become a 50+ start player, he doesn't need to play like he did at the start of last season for the Sabres to win.

2. Defensive pairings-- tonight's and where to go from here:

Considering it's the final game of the preseason and the Sabres have nearly double the amount of defensemen on the roster that they should, I'm surprised any mainstay for the Sabres was on the blue line today. But the pairing of Rasmus Dahlin and Colin Miller was an interesting one. Both of them are locks and both of them are more offensive-minded, can serve as power play quarterbacks, and can join the rush.

That's not to say that either of them is incapable in their own end. But pairing them together forces at least one of them to stay home and play conservative. The overload of right-shot defensemen has shown in the preseason; the Sabres' next three best blue liners after Dahlin all play the right. And that's not counting veteran Zach Bogosian or the newly acquired Henri Jokiharju.

3. Evan Rodrigues looks much stronger in his own end:

The 26-year old Boston University product put up nine goals and 20 assists in his first season as a full-time Sabre. He was often relegated to a bottom-six role that requires more two-way play than he had played prior both at BU and in Rochester. But he showed some more of those capabilities tonight by breaking up passes and back-checking well.

Albeit, it was in a preseason lineup, but Rodrigues was a staple on the penalty kill tonight and showed more prowess in defensive situations throughout the preseason. At least to start the year, Rodrigues should be on the third line and facing a similar defensive role. In the long term, if Casey Mittelstadt isn't ready for those minutes, it makes more sense for Marcus Johansson to move over from the wing than to move Rodrigues up.

The Sabres' regular season starts the in the same place that their preseason ended: Pittsburgh. The season opener for the blue and gold is on Thursday, October 3 at 7:00 p.m.