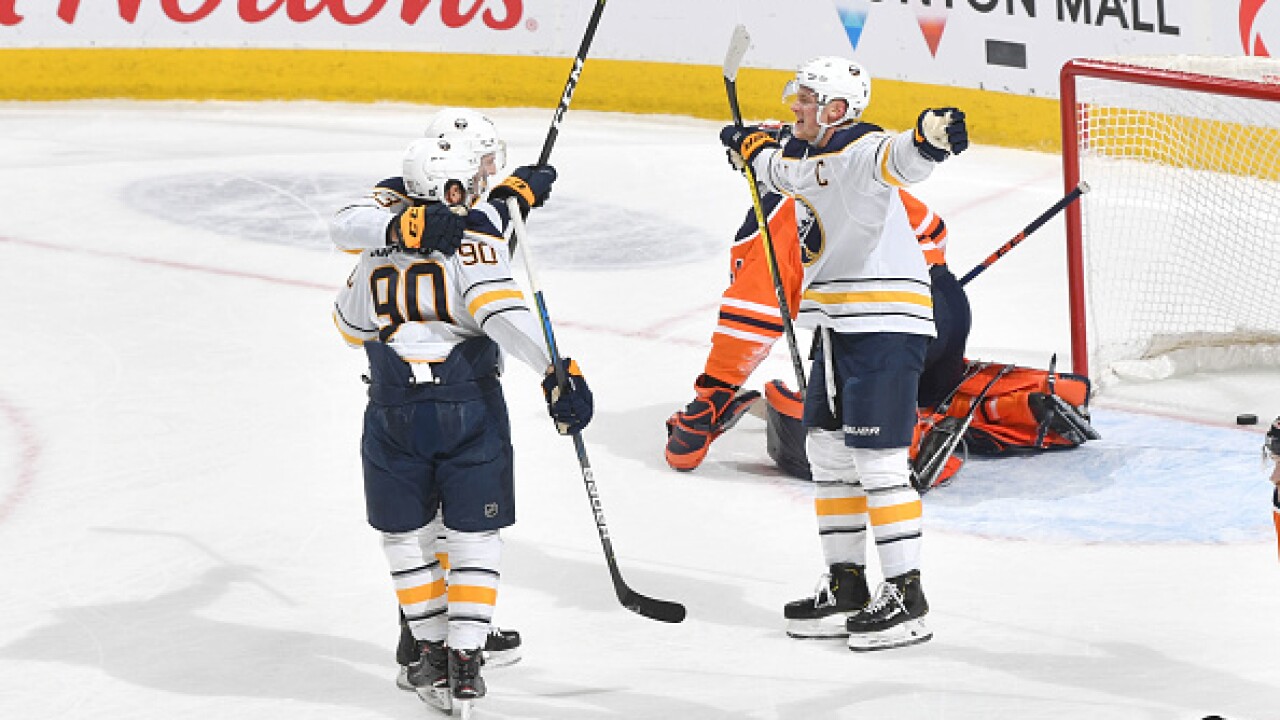 BUFFALO, N.Y. (WKBW) — The Buffalo Sabres come home with a win from their trip to west Canada after Sunday's 3-2 overtime win against the Edmonton Oilers. Kyle Okposo and Johan Larsson scored for the Sabres in regulation to build an early 2-0 lead, but the Oilers tied it back up. In overtime, the recently scratched Colin Miller scored the game winner on the doorstep. It was his first as a Sabre and his first career overtime goal. The Sabres return home to KeyBank Center to play the St. Louis Blues on Tuesday.

I'm going to need to come up with more nicknames for this line. In their second game back together since Kyle Okposo's concussion, the Girgensons-Larsson-Okposo line was productive once again for the blue and gold. They accounted for two goals and are back to their hard-nosed ways when the puck isn't on their sticks as well.

These three haven't missed a beat. Going with eleven forwards and seven defenseman was a short term patch for a long term problem; and it very well might've been the lack of this line. The roaring twenties/LOG line isn't going to stay this productive for the rest of the season; they might not even stay together for the rest of the season. But I'm sure the only people complaining about them are on the opposition's bench.

Whatever corner Casey Mittelstadt was expected to turn this season, he clearly missed it. Hockey players take time to develop, sure, but he's regressed. He's got one of the worst plus-minuses on the team, he hasn't been winning faceoffs, and no matter who he's paired with or where he plays (center or wing), he can't provide the secondary scoring the Sabres desperately need.

Instead, Evan Rodrigues centered Jimmy Vesey and Conor Sheary. The common theme among all of them: borderline second to third line-level talent in all three zones, but none of them can be looked upon as a primary option offensively. The Sabres severely lack those beyond the top line. But at least in the other aspects of the game, Vesey, Sheary, and Rodrigues play like they belong.

Battle of the stars

The bi-annual match-up of Jack Eichel vs. Connor McDavid felt like a bit of a letdown. Not in terms of how either of them played, but simply in terms of scoresheet production and the dazzling plays they're both capable of making. Instead of the two of them taking over the game, throughout regulation we instead saw the role players shine. And there's nothing wrong with that.

They still looked like the two best players out there. And they are. But at least tonight wasn't the kind of night where McDavid showed up and took over the game and Eichel couldn't do anything to help get the momentum back in the Sabres' favor.