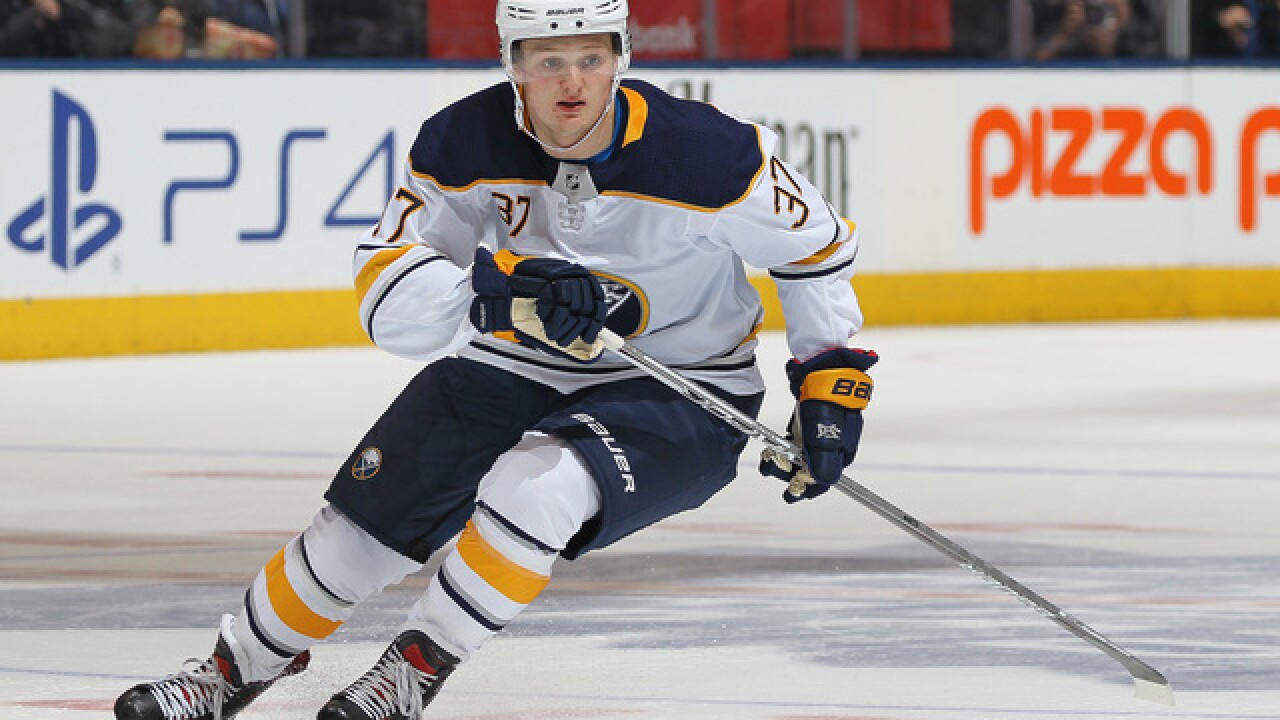 Copyright 2018 Scripps Media, Inc. All rights reserved. This material may not be published, broadcast, rewritten, or redistributed.
Claus Andersen
<p>TORONTO, ON - APRIL 2: Casey Mittelstadt #37 of the Buffalo Sabres skates against the Toronto Maple Leafs during an NHL game at the Air Canada Centre on April 2, 2018 in Toronto, Ontario, Canada. (Photo by Claus Andersen/Getty Images)</p>

BUFFALO, N.Y. (WKBW) — The second game of the Buffalo Sabres' home-and-home with the Toronto Maple Leafs took more than 60 minutes on Saturday night. The Leafs took down the Sabres 2-1 in overtime. William Nylander started the scoring in the second period; Rasmus Ristolainen had the answer for the Sabres in the final frame of regulation. John Tavares scored the game winner for Toronto.

Ralph Krueger's original rationale for going with eleven forwards and seven defensemen was to create different looks on the power play and the penalty kill. But the different looks and different combinations didn't stop there at ScotiaBank Arena tonight.

Colin Miller was originally listed as the odd defenseman out slotted into a forward spot. Over the course of the game, he was paired with Rasmus Ristolainen and Henri Jokiharju. Everyone, at some point or another, was away from their original partner for multiple shifts at a time.

The benefit of dressing seven defensemen is apparent on the penalty kill: No matter who's in the box, there's three different pairings at the Sabres' disposal. Having that depth allows Buffalo to press out towards the half boards and fight for the puck behind the net more aggressively and more often.

There's a benefit in the numbers game on even strength. Krueger has benched a blueliner for ten or more minutes at a time in the past. Having seven defensemen at his disposal gives him the option to do so without demanding an excess of minutes from someone else.

Mittelstadt on the wing

The University of Minnesota product hasn't lived up to expectations this season. Aside from a point streak out on the west coast last month, Casey Mittelstadt has been fairly quiet on the stat sheet. He's also proven to be hot and cold on the faceoff depending on his match-up.

Putting Mittelstadt on Marcus Johansson's wing affords the former the opportunity to be more effective in smaller doses on faceoffs. The latter's veteran presence, along with Jimmy Vesey on the other wing, also takes him away from the expectation of being the alpha of his line.

Battle between the pipes

Neither team went with the same goalie that started in Friday night's contest. Carter Hutton was in net for the Sabres; and Frederik Andersen got the nod for Toronto. Hutton and Linus Ullmark are nearly interchangeable; their record, save percentage, and goals against average, are all nearly identical.

Andersen, on the other hand, is tied for the third most wins in the league despite the Toronto's slow start this year. He played like it tonight. Andersen was robbing one-timers, making cross-crease saves, and sprawling out for loose pucks all game long. He was the difference for the Maple Leafs.

There was no way for the Sabres to maintain their success rate from October. But the woes of November are behind them now, too. A return to the status quo comes along with flipping the calendar.

The NHL Global Series was book-ended by five days without a game both before and after their double-header with Tampa Bay. Buffalo was behind the rest of the league in terms of games played. The back end of this month saw ten games in just 17 days. A much more evened out schedule awaits them in December. It starts with a home game against the New Jersey Devils on Monday.