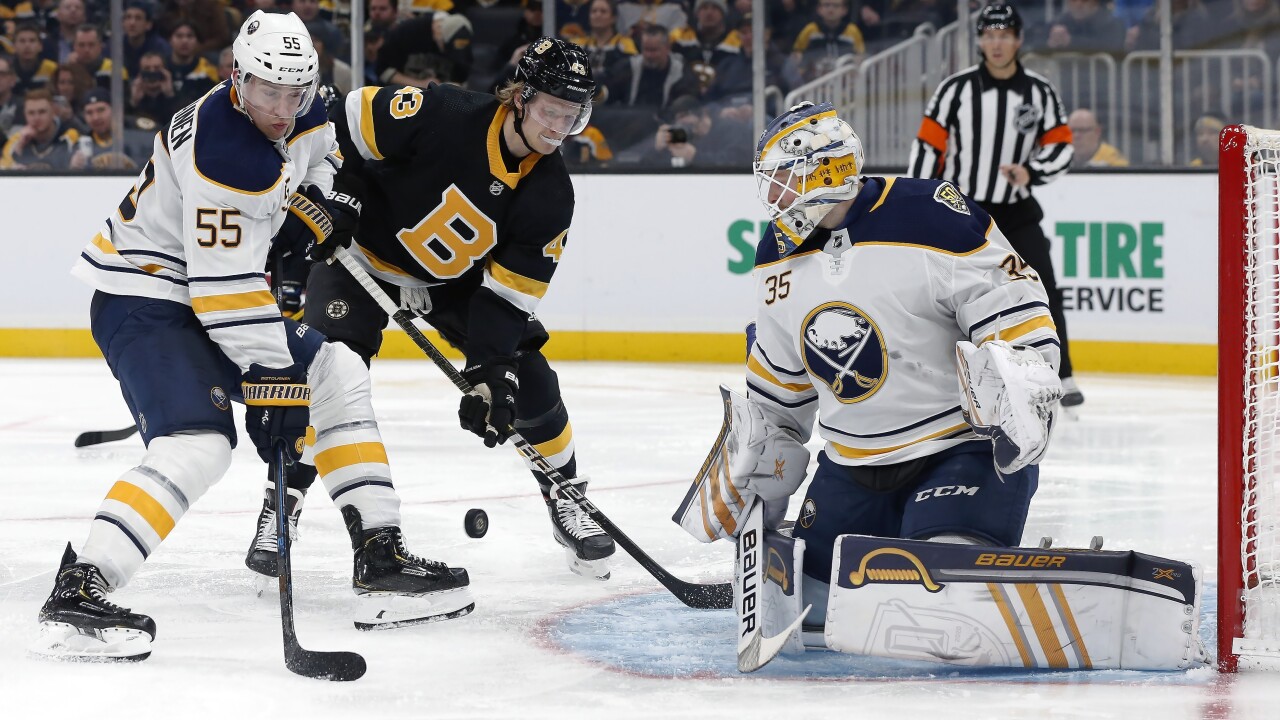 BUFFALO, N.Y. (WKBW) — The Sabres were swept in their mid-season home-and-home with the Boston Bruins. Sunday night's tilt at TD Garden was another loss for Buffalo. The Bruins came out on top 3-2 behind two goals from Jake DeBrusk in a 20-second span. The latter of his two goals was the game winner. The Sabres return home on Tuesday to take on the Tampa Bay Lightning at 7:00 p.m.

The lineup at forward wasn't working for Buffalo. At all. After coming up empty against Boston on Friday, the Sabres rolled out a some new combinations at practice. Those came to fruition in the game and, while it wasn't pretty, they yielded more goals than they did at home against the Bruins two days ago.

No combination of old was safe. Kyle Okposo joined Victor Olofsson and Jack Eichel at even strength; Johan Larsson centered Marcus Johansson and Sam Reinhart; both the top line and the LOG line were gone. The Sabres also rolled out four full lines of forwards, which has become a rarity as of late. Zach Bogosian and Marco Scandella were the scratches.

It's just something about the Bruins that brings out the best in Rasmus Ristolainen. The defenseman has four goals in his last five games against the Bruins; the only exception was Friday's game.

The goal itself was a little lucky; Bruins defenseman Zdeno Chara couldn't get the puck off his own goal line. But Ristolainen picked the perfect time to join the rush. If he hadn't, the Sabres wouldn't have had the numbers advantage on their way into the zone. It would've just been Reinhart against Chara.

At least for the time being, the new lineup has patched up the even strength scoring problem. But the power play and the penalty kill were both problematic; they were the difference in the game. Two of the Bruins' goals were scored on the power play and the Sabres went scoreless when they had the man advantage.

For all of the shuffling that was done with the even strength lineup, the power play stayed untouched. The only difference is, with Jeff Skinner out, the consistent presence of Marcus Johansson on the first unit. The second included the likes of Kyle Okposo, Conor Sheary, and Jimmy Vesey.