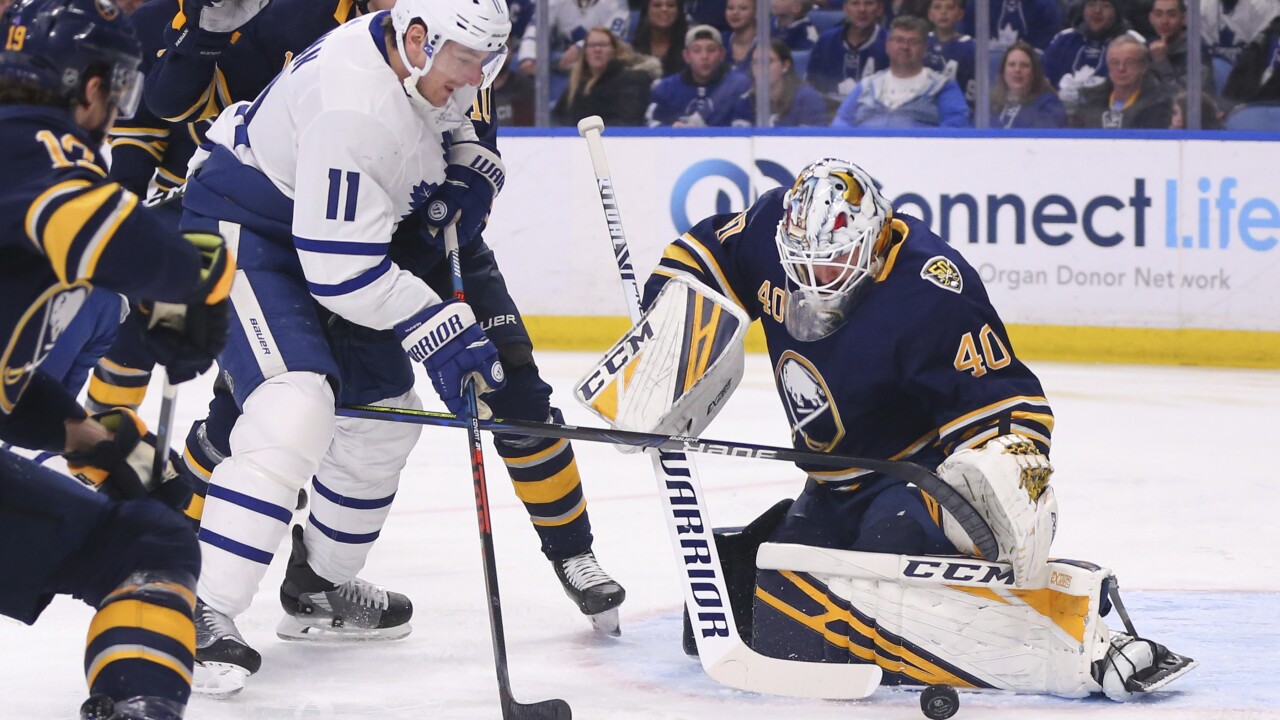 BUFFALO, N.Y. (WKBW) — It all started with the tying tally for the Toronto Maple Leafs early in the third period. Four minutes later, Jack Eichel gave Buffalo a 3-2 lead with a rocket on the power play.If you got up to go to the bathroom after that, you might have missed the Sabres' next two goals.

Three tallies in 1:31 led the Sabres to a 5-2 win over the Toronto Maple leafs to close out their long home stand on the right foot. Their next game is in Ottawa against the Senators on Tuesday.

Perfectly balanced, as all things should be?

KeyBank Center has been quiet lately. Sometimes dead quiet. A variety of factors both on the ice and off it have contributed to a widespread loss of interest in the Sabres. Seats were filled tonight; but they weren't all blue and gold.

For every "Let's go Buffalo," a "Go Leafs go" rose to challenge it. Without the Sabres' goal horn, the building might have actually gotten louder for Toronto goals than it did for Buffalo goals.

The environment for Sabres-Leafs is always a good one; don't get me wrong. But tonight, this seemed like a harder place to play for Buffalo than it was for their opponents.

The right call on the ice.

The Sabres were pelting Frederik Andersen all game long. But the Maple Leafs' netminder was credited with three saves in less than three seconds with about two minutes to go in the first period.

At first sight, the question was "How on earth is that NOT a goal?" But angle after angle showed that the referees made the right call on the ice. Even if you think it could've gone the other way, the evidence wasn't anywhere near enough to definitively change it.

Net presence kept them in it.

Both second period goals were scored in the most important area of the offensive zone: right in front of the net. Toronto found its way there throughout the game too, but without it, neither Buffalo goal happens.

Johan Larsson, and the entire LOG line for that matter (yes, we're back to that nickname), always seem to be in front of the net. There were possessions where all three of them crowded around there waiting for defensemen to put the puck on net.

It's how Conor Sheary cashed in on a deflection. It bought Jack Eichel some extra deception on his power play goal. I could continue, but the goals that follow bring me to my next point.

This is what happens when you don't babysit a lead.

But tonight, the Sabres responded just in time. And evidently, when it rains, it pours. Three goals in a span of 1:31 put this game out of reach for Toronto.

So KeyBank Center was close to a 50-50 split tonight between Sabres fans and Leafs fans. But the nine of ten home stretch ended on the right foot for the blue and gold.

They hit the road to face Ottawa on Tuesday. Their next game at home is in a week; they play the Winnipeg Jets at home on Sunday. If they can build on this win, KeyBank Center could be much closer to its original form that was a regular sight earlier this season.