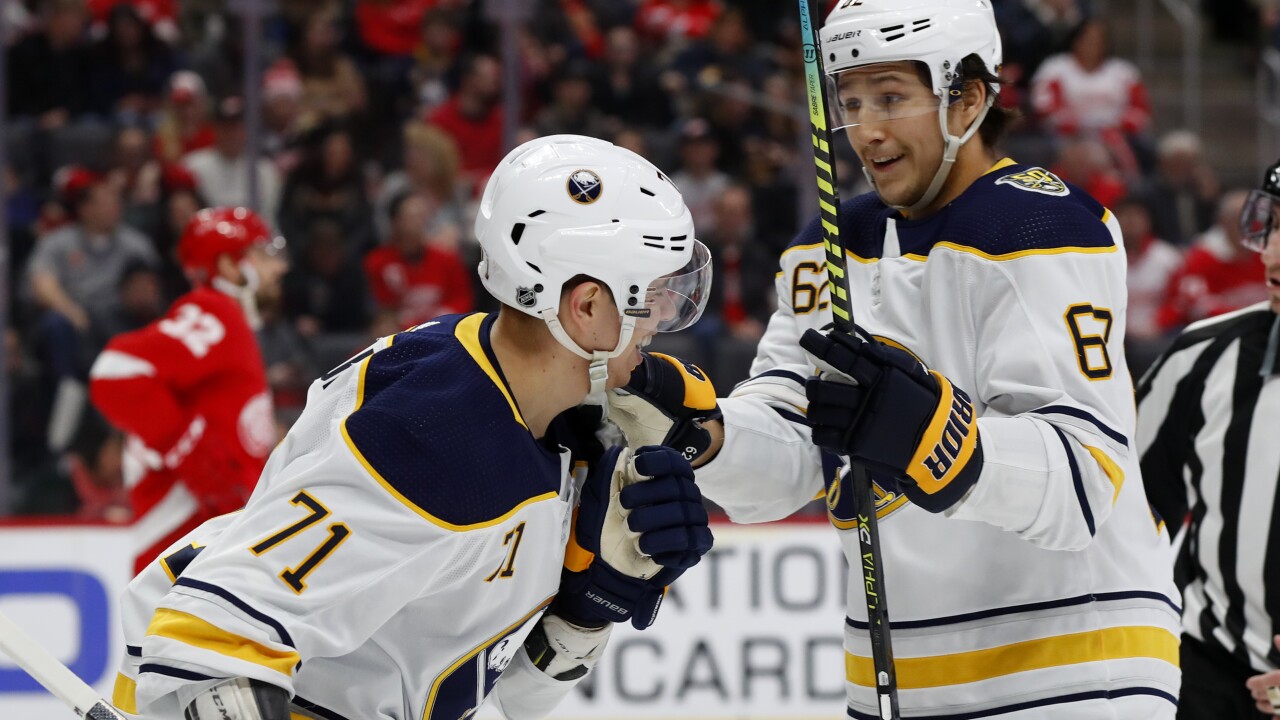 BUFFALO, N.Y. (WKBW) — The Buffalo Sabres snapped their two-game skid in emphatic fashion on Sunday evening. Three goals in the first period allowed them to never look back as they cruised to a 5-1 victory over the Detroit Red Wings. Evan Rodrigues found the back of the net for the first time this season, the power play scored twice, and Linus Ullmark saved over 95% of the shots he faced. The Sabres return to Buffalo on Tuesday to host the Vegas Golden Knights.

Evan Rodrigues hasn't exactly been a mainstay in the Sabres' lineup this season. He started the year as the odd man out and, despite earning some ice time in stretches, has also fallen victim to being scratched. Through his first 25 appearances this season, he had just three assists.

There are other elements of the game that he does well; it's why he stays on the ice. But to finally get his first of the year-- and then add another on the power play just a few minutes later-- should really take a monkey off Rodrigues's back. I wouldn't be surprised to see him maintain better offensive production now that he's finally buried one.

Okay, so maybe he hasn't earned his own spin on Victor Olofsson's nickname. Or maybe it doesn't roll off the tongue like Goal-ofsson does. But either way, especially with the Sabres hurting up front for the rest of the month, it might be time to recognize Zemgus Girgensons as a legitimate secondary scorer.

With the absence of Olofsson and Jeff Skinner, Girgensons's contributions are certainly welcome. The only two healthy players who have found the back of the net more than him are Sam Reinhart and Jack Eichel. Some of his goals happen because he's in the right place at the right time. But he knows where to go.

No Olofsson and no Skinner hurts. There's no denying that. But the biggest void that it could have left is on the power play. Last weekend, Sam Reinhart addressed playing in the circle instead of in front with the man advantage: "For the first 19 years of my life, I've been over there [in the circle]," Reinhart said.

Normally, with some additional healthy shooters, Reinhart plays in front. But tonight, it was Rasmus Ristolainen. He's the biggest body (6'4" 220 lbs) in the lineup and has good hands for a defenseman. Not only can he be a nuisance in front, but he also cashed in against the Red Wings.

Maybe the Sabres aren't where they were expected to be in the standings at this point. They certainly aren't where they want to be. But Detroit is abysmal. Their roster is a hodgepodge of journeymen, veterans, and recent draft picks. Jimmy Howard only has two wins in 17 appearances this season and he's got a goals against average above 4.00.

It could help them get back on track, but this is about as easy as an opponent comes in the NHL. They'll certainly face a greater challenge when the Vegas Golden Knights come to KeyBank Center on Tuesday night.