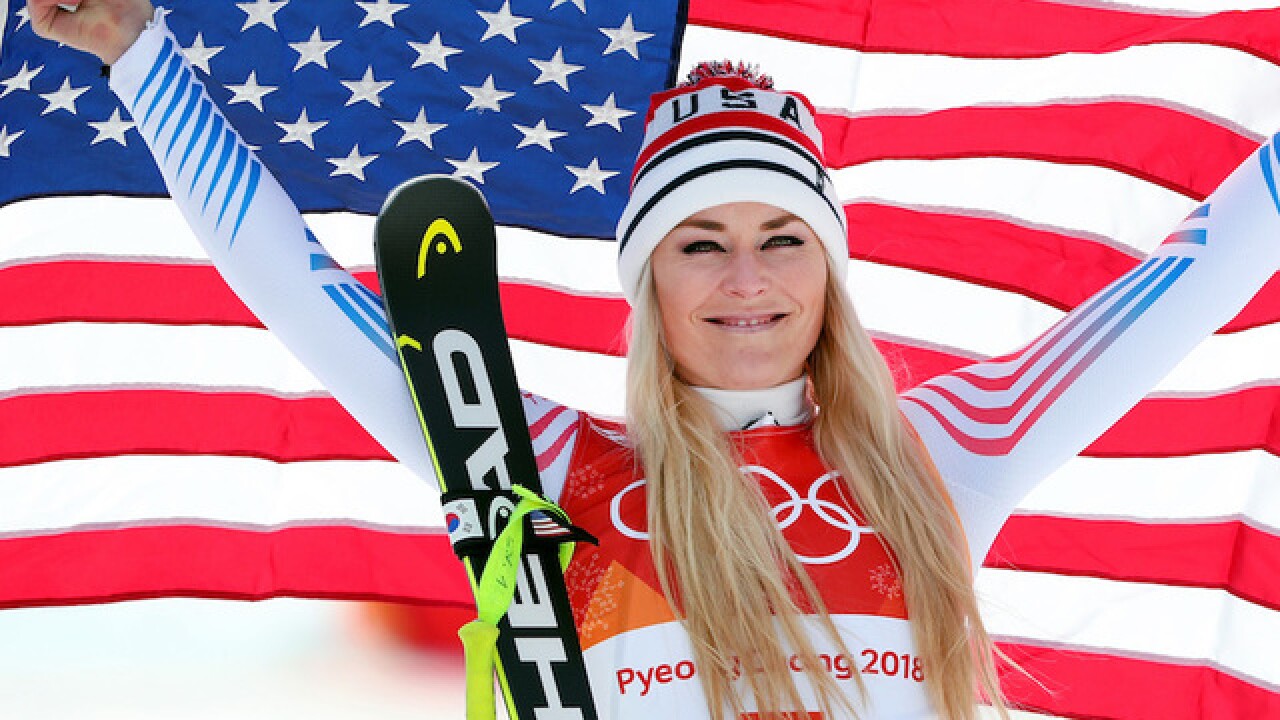 Lindsey Vonn said she "left it all on the line" as she had to settle for bronze in downhill in what is likely to be her final Olympics.

The most successful women's ski racer of all time was one of the pre-race favorites, but the 33-year-old could not match the pace of Italy's Sofia Goggia.

Goggia's time of 1:39.22 was 0.47 seconds better than Vonn's effort, and 0.09 seconds faster than Norway's Ragnhild Mowinckel, who took her second silver of the Games at the Jeongseon Alpine Centre.

"I came here with one goal -- to beat Lindsey," said Goggia, who had beaten Vonn in the Olympic test events on the same hill.

"This was good, but here I realized that though this duel was really good, it wouldn't have helped me out so much because I have to be focused on myself."

Goggia's gold is Italy's third at the Games, two fewer than the US who are sixth in the medal table with a disappointing haul of 13 medals.

'I wish I could keep going'

Vonn, second only to Ingemar Stenmark's record of World Cup wins, becomes the oldest woman to win an Olympic medal in any of the five Alpine skiing disciplines.

"I'm so thankful to be here, to be on the podium in what is likely to me my last Olympic downhill race," the US great told reporters.

"It's so difficult to get a medal at the Olympics. I wish I could keep going, I wish this wasn't my last Olympics, but it is and I'm trying to accept that, deal with the emotions of that and enjoy the ride.

"I thought I skied really well. I have to look at a video, but I thought I executed the line perfectly. I thought I did great.

"Maybe I was a bit too clean, too precise, maybe I should've let the skis run more. I didn't make any mistakes, I didn't ski stiff, I wasn't nervous, I left it all on the line."

Eight years after she became the first American woman to win the Olympic downhill title, Vonn admitted that the intervening years had been "full of ups and downs."

It was a knee injury which prevented her from defending her downhill title in Sochi four years ago, but Vonn said her injury problems had made her stronger.

"The last eight years have been full of ups and downs. Lots of downs I'd say, especially from 2013 to now," she said.

"I've never thought of quitting because of an injury, but it's taken its toll and that's why I can't keep ski racing.

"My injuries have made me stronger because I wouldn't be the same person that I am today.

"When you're young you ski and you win and you don't appreciate things. I've been in the fences so many times, I know so many doctors on a first name basis that it's ridiculous.

"But that's what makes life interesting, what makes you appreciate all of the moments like this because I've been through the hard times.

Vonn is 'the greatest'

Vonn made her Olympic debut as a 17-year-old in Salt Lake City in 2002 and, after finishing sixth, was lauded as a new American heroine of the sport. Multiple Olympics later she has fulfilled that early promise.

Vonn still has an outside chance of capping her final Games with Olympic gold when she competes in the combined on Thursday.

After the race Vonn revealed she had invited Goggia to her house in November to discuss dealing with pressure and expectation.

"I'm happy to do that: that's sportsmanship," said Vonn. "I appreciate that she even asked me. And I want to give back, I want to see the next generation of ski racers raise the level of our sport."

Goggia told reporters that Vonn was "the greatest skier."

"She has 81 victories, I have four - five with this," said the Italian.

"She's unbelievable. She's acting like it's normal, it's easy. She's the greatest and she's had a wonderful career -- and she's still having that because it's not over. The battle with her is still going on."

'I've been crying all day'

These Games have been emotional for the American, not only because they are her last but also because she wanted to win a gold medal in memory of her grandfather who recently died.

After finishing her race, the skier cried when asked about her grandad but said that despite not taking gold she hoped she had made him proud.

"That's another reason I've been crying all day. I just wish he was here and wish he could've watched me," she said, adding that it was also special to have her father, Alan Kildow, in the crowd.

"It's very special to have my family here, especially my dad. He wasn't at the 2010 Olympics. We had some rough times, but it means a lot that he's here. With my grandfather passing, it's his father and it makes you realize how short life is.

"To have them here today means everything to me."

It has also been a difficult few months for the American because of the "savage abuse" she has received on social media.

After she told CNN in December that she wouldn't visit the White House should she win a medal in Pyeongchang, the veteran skier has been intermittently abused on social media.

That abuse increased on Saturday after she finished sixth in the super-G, a race won by snowboard specialist Ester Ledecka.

"I think the most important thing with social media is to be who you are," she said.

"I think social media can be used in a positive way if you're a good person. I feel like recently it's just taken a different turn and I hope it turns around.

"Instead of tearing people down we can build people up. That's what sports is about. You're supposed to be uplifting. This is the Olympics, we cheer for every country, instead of someone hoping that someone takes a fall or skis off a cliff and dies.

"It's hard for me to understand the thought process of the savage abuse I've taken on the internet. In real life most people wouldn't say that to me to my face.

"I will not be beaten. I stand strong and I'm proud of what I represent and who I am.

"I'm very proud to hold the American flag on the podium. All Americans deserve to hold the flag and be proud of their country no matter what their beliefs because that's what makes America great."