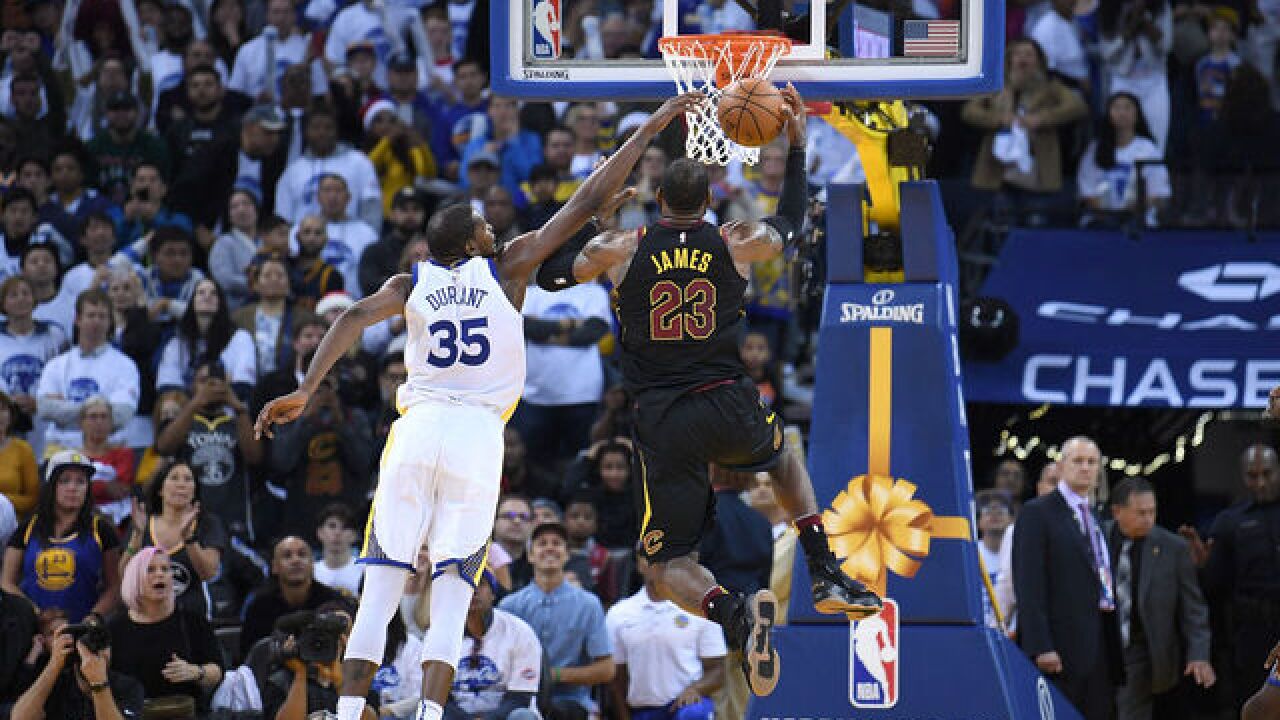 Copyright 2018 Scripps Media, Inc. All rights reserved. This material may not be published, broadcast, rewritten, or redistributed.
Thearon W. Henderson
<p>OAKLAND, CA - DECEMBER 25: Kevin Durant #35 of the Golden State Warriors blocks the shot of LeBron James #23 of the Cleveland Cavaliers late in the fouth quarter of an NBA basketball game at ORACLE Arena on December 25, 2017 in Oakland, California. NOTE TO USER: User expressly acknowledges and agrees that, by downloading and or using this photograph, User is consenting to the terms and conditions of the Getty Images License Agreement. (Photo by Thearon W. Henderson/Getty Images)</p>

For the fourth year in a row, the NBA Finals comes down to just two teams: the Cleveland Cavaliers and the Golden State Warriors. In 2015, the Warriors took home the prize. Then in 2016, LeBron James helped bring a championship to his hometown team in Cleveland. And last year Golden State, with the addition of Kevin Durant, regained the Finals series lead.

As the 2018 version of the series begins on Thursday night on 7ABC in Buffalo, there are plenty of factors that make this rendition of Cavaliers-Warriors IV a potentially great series.

What are some of the key storylines heading into the next renewal of this high-stakes rivalry? Seven things to watch in this year's NBA Finals:

1) LeBron is working on a masterpiece
- Going through one of the most grueling regular seasons that he's had to endure, LeBron James -- despite many reasons existing to prevent him -- has brought his Cavaliers all the way back, and primarily on his back. He's had a lot of great playoff runs, but this might be the best one of the bunch from the perspective of individual effort. James is consistently playing well, getting at most a handful of minutes on the bench to recuperate, and he's shooting efficiently despite having the sole focus of the opposing defense. Considering his supporting cast and their lack of effectiveness for the most part in this playoff push, the last time James has had to put one of his teams on his back like this all the way to the NBA Finals was all the way back in 2007. In that series, he and the Cavaliers made it all the way with a 31-year-old Zydrunas Ilgauskas, Drew Gooden, Daniel 'Boobie' Gibson, and Sasha Pavlovic all playing meaningful minutes. The San Antonio Spurs swept that rendition of the Cavaliers, and James didn't make it back to the Finals again until he left for Miami in the 2010-2011 season. His supporting cast is much better on paper than that season, and it's allowed him to average nearly nine assists per game. However, he's had to keep the entire team afloat after they revamped a large percentage of the roster around the trade deadline. With how much he's had to put on himself all the while with all the focus on him, this has been an incredible playoff run for one of the greatest ever to play the game. If he can help his hometown team pull off another championship, this will be his most impressive feat yet.

2) The Warriors' poetry-in-motion offense
- When the Golden State Warriors are on, it's a beautiful thing to watch. They have three multi-faceted scoring options in Steph Curry, Kevin Durant, and Klay Thompson -- and they have shown the proclivity to heat up all at the same time. Curry can lull a defender to sleep and blow by in a controlled manner to get to the hoop, but then can also drain a three in his face from a far distance on the next possession. Durant, with his wingspan, has a jump shot that is difficult to stop and he has the concentration to nail those shots with a defender just inches from blocking it. Thompson has a knack for finding the space on the offensive end and making himself available from the three-point line. He's one of the best catch-and-shoot talents in the NBA, and an incredibly quick release to go along with it. When these three players are hitting on all cylinders, and it's combined with the Warriors' excellent spacing of the court to keep defenders a step behind, they are indeed an unstoppable force. The Warriors have helped change the former stigma of the NBA and at the same time, have become the team and playing style that not only other teams in the NBA want to emulate, but also for a quickly increasing amount of young athletes growing up and playing basketball competitively. Simply put, the Warriors make basketball fun -- and the best part, you never know when they're going have an unforgettable stretch during a game that blows by the opponent, but the possibility is always there with this team.

3) Golden State's third quarter prowess
- Sticking with the Warriors, part of their dominance in this year's playoffs has had much to do with how well they've performed in the third quarter. The last two games against the Houston Rockets get all the attention, in which the Warriors trailed by double digits at halftime both times and wound up taking the lead by the end of the third quarter. In those two games alone, the Warriors outscored the Rockets by 35 points in the third quarter -- and Houston had no counterpunch, even when they were playing at home in Game Seven. Those two games aren't an anomaly for Golden State. They have dominated the third quarter all throughout the postseason, outscoring their opponents in 14 of 17 games, by a total of 130 points. That's an average of a 7.7 point advantage per game, and a clear indicator of their success this postseason -- even in games that they've trailed in.

4) Can the Cavaliers get a bench player to step up?
- When the Cavaliers overhauled the roster at the trade deadline, it brought back four key players: George Hill, Jordan Clarkson, Larry Nance, Jr., and Rodney Hood. All of those pieces showed some flashes during the regular season, but during the playoffs, all but one of them have disappeared. The trio of Clarkson, Nance, Jr., and Hood have just been an incredible disappointment in the postseason, which has meant a smaller bench, and more minutes for the players that head coach Tyronn Lue has seen that he can trust. The one that takes the cake this postseason has been Rodney Hood, who is shooting just 15.8-percent from three-point range during the playoffs. For a player that has the reputation in the NBA to be able to make open shots, that's an abysmal stretch of games, and had a total of three minutes on the floor for Cleveland in their last five playoff games. In Game Seven versus Boston, the Cavaliers only used three bench players, and they totaled a combined 35 minutes. They could certainly use one of those three disappointing trade acquisitions to step up in this series, or even the sharpshooting Kyle Korver.

5) Significant injury questions for both teams
- Coming into the series, both the Cavs and Warriors are missing a key component to their operation. For Cleveland, it's one of their starters and an NBA All-Star to boot: Kevin Love. The floor-stretching power forward has been dealing with a concussion, and his status for the series is really up to whenever he clears through concussion protocol. With him, the allocation of minutes can become a little easier on the primary rotation of players, and it adds a legitimate scoring threat to pair with LeBron James. For the Warriors, they've been without former NBA Finals MVP Andre Iguodala for the past four games because of a leg contusion, and he's going to miss at least the first game of the NBA Finals, too. Iguodala's impact on the game is mainly as a defender, with the size, strength, and length to put up a fight against LeBron James. He also provides the ability to knock down open three-point attempts while the defense is focusing on Curry, Durant, and Thompson. If either of these teams can get these two players back at some point in the series, it would be a humongous boost and could significantly impact the outcome of the series.

6) Warriors X-factor: Draymond Green
- When the Warriors are at their best, it's because they have four players on the court that can hit a three-point shot with ease, meaning the defense can't give any additional attention to one of the three primary scoring options. That's where Draymond Green comes into play. There is no doubting his importance already for the Warriors as a rebounder, an excellent passer, and also as a bit of an agitator to get under the skin of his opponents. The one thing that has disappeared for Green has been his ability to knock down the open three. Generally around a 31-percent shooter from beyond the arc, Green only hit two three-pointers in the Western Conference Finals -- with a shooting percentage of 11.8. Late in the series, it looked like he was overthinking it as he was going up with the shot. If he can regain that confidence in a shot everyone knows he can make, his three-point shots can be an absolute backbreaker for the Cavaliers.

7) Cavaliers X-factor: George Hill
- While Clarkson, Nance, Jr., and Hood have become non-factors for Cleveland in the playoffs, George Hill has more than earned the trust of his coaches and teammates since coming over at the trade deadline. He plays a ton of minutes and considering he's a point guard going up against the Warriors, he could have a humongous impact on the game in more ways than one. Hill is only 6-foot-2 but has a 7-foot wingspan and uses it well on defense, which could lead to Cleveland sticking him on the smaller Steph Curry in an attempt to limit his effectiveness both from three and driving the lane. Additionally, he'll likely be the forgotten man in the Cleveland offense -- at least from Golden State's perspective. The Warriors don't usually load Curry with a huge defensive assignment, which means Hill could see him quite a bit in this series. If he can use his length and speed to get to the basket, I could see an uptick in his scoring for the NBA Finals.

Prediction: Warriors in six
- It's hard to pick against LeBron James with the way that he's played this season and in the playoffs, and I believe he'll single-handedly will the Cavaliers to a pair of victories. However, Golden State has just too much firepower, too many scoring options, they have dependable bench players that give them valuable minutes, and if they get Iguodala back, that's just another thing in their favor. We're sure to get a lot of special moments from LeBron James, but he needs his supporting cast to help Cleveland pull off the upset in this series. At the end of it all, I've got the Warriors capturing the title for the third time in the last four years.