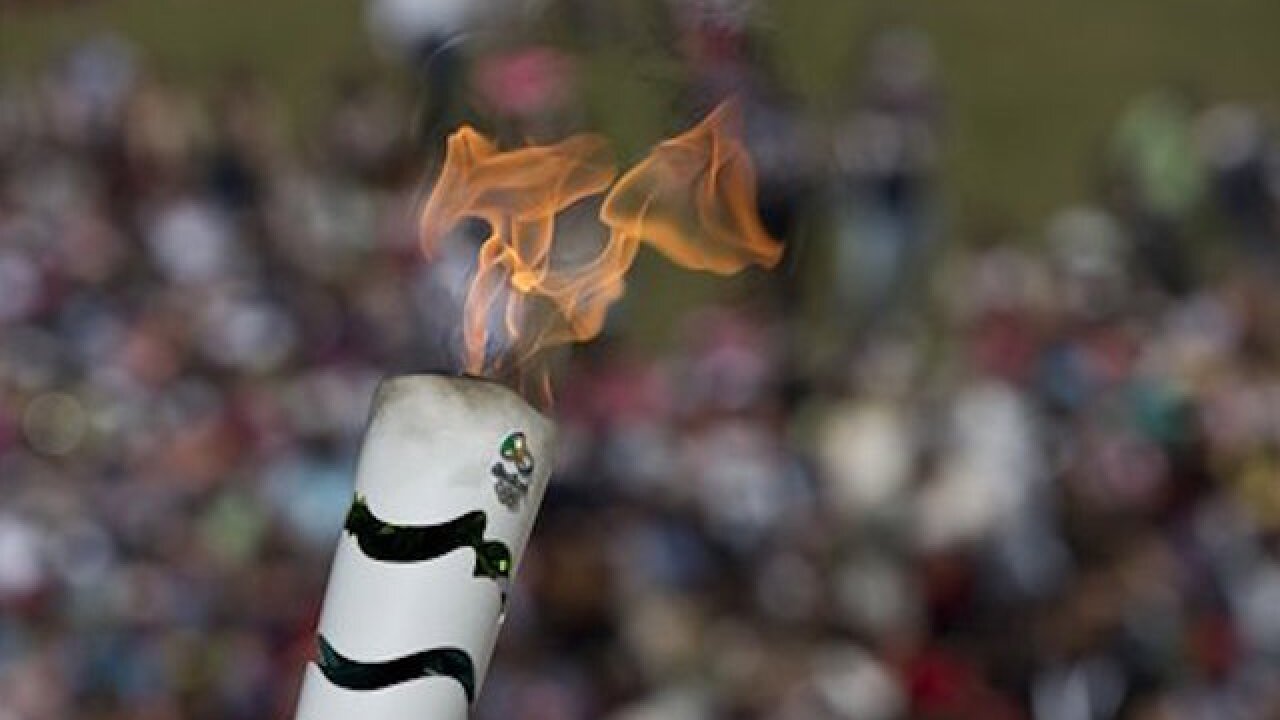 Copyright Associated Press
Petros Giannakouris
<p>A lit torch of Rio de Janeiro Olympic games seen during a dress rehearsal for the lighting of the Rio Olympics flame, in Ancient Olympia, southern Greece, on Wednesday, April 20, 2016. The meticulously choreographed ceremony will be repeated Thursday in the ruined birthplace of the ancient Olympics in southern Greece, in the presence of top International Olympic Committee and Rio organizing officials. That will touch off a relay that will conclude with the Rio Games opening ceremony in August. (AP Photo/Petros Giannakouris)</p>

ANCIENT OLYMPIA, Greece (AP) — The flame for South America's first Olympics was kindled Thursday at the birthplace of the ancient games in Greece, heralding the start of a 15-week journey that will culminate with the August 5 opening ceremony in Rio de Janeiro.

International Olympic Committee leaders and Brazilian organizers attending the flame-lighting in the ruins of Ancient Olympia voiced confidence that Brazil will stage successful games, despite a political crisis which forced Brazilian President Dilma Rousseff to cancel a scheduled appearance at the ceremony.

Rousseff faces possible impeachment before the games over alleged accounting tricks in managing the federal budget. The host country is also beset by corruption scandals, a deep recession and the Zika virus outbreak, while games-related problems include spending cuts, slow ticket sales and delays in some venues.

Carlos Nuzman, head of the Rio organizing committee, said the Olympics will help unite Brazilians and pledged that the host city "is ready to deliver history."

"We are incredibly proud to have come so far, sailing through some of the most challenging waters the Olympic movement has seen," Nuzman said, adding that the Olympic flame "brings a message that can and will unite our dear Brazil."

The IOC insists that the Rio Games will be a success, maintaining that preparations are already at an operational phase.

"These Olympic Games will be a message of hope in troubled times — and indeed the flame will carry this message into all corners of Brazil and, indeed, all the world," he said. "Despite the difficulties that Brazil is facing today, the flame is a timeless reminder that we are all part of the same humanity."

The flame was lit outside the 7th Century B.C. Temple of Hera in Olympia by Greek actress Katerina Lehou, in a long pleated dress impersonating a pagan high priestess. After a mock prayer to the ancient Greek gods, she used a concave mirror to focus the sun's rays on her torch, and the ceremony continued in the ancient stadium — which was used at the 2004 Athens Games as the shot put venue.

The flame-lighting ceremony, a key part of the Olympic pageantry, dates to one of the more awkward moments of the modern games, the 1936 Berlin Olympics conducted by Nazi Germany.

The first torchbearer, Greek world gymnastics champion Eleftherios Petrounias, took delivery of the flame and handed it to Brazilian former volleyball great Giovane Gavio at the beginning of a relay involving hundreds.

The relay will traverse Greece for six days until the April 27 handover to Brazilian officials in Athens, at the refurbished ancient stadium where the first modern games were held in 1896.

In a nod to the global refugee crisis, the Greek leg will include a stop at a camp in Athens that is home to 1,500 refugees and migrants trapped in Greece — one of whom will participate in the relay — while a young Syrian boy from another camp will accompany the torchbearer in a small town just north of Olympia.

For the first time at the Rio Games, the IOC will allow a group of 5-10 refugee athletes to participate, marching behind the Olympic flag at the opening ceremony.

After a brief stopover in Switzerland, the flame will start its travels through Brazil on May 3, starting in the capital of Brasilia. Organizers say it will reach most of the vast country's 200 million population, covering 20,000 kilometers (12,000 miles) by road and 16,000 kilometers (10,000 miles) by air to reach hundreds of cities and towns in a giant effort involving 12,000 torchbearers.

In a departure from customary practice, Rio will have two stadiums: the Maracana for the opening and closing ceremonies and soccer, and the Olympic Stadium across town, which will be used for track and field. After the first night in the Maracana, the flame will depart for an undisclosed downtown location for the rest of the games.

Set among verdant hills traversed by lush river valleys, Olympia hosted antiquity's greatest sporting event for over 1,000 years, from 776 B.C. to 393 A.D., when the games were suppressed as Greece's new Christian order sought to eradicate all traces of the pagan past. The Christians also destroyed the temples at the site, which was later damaged by floods, silted up and forgotten.