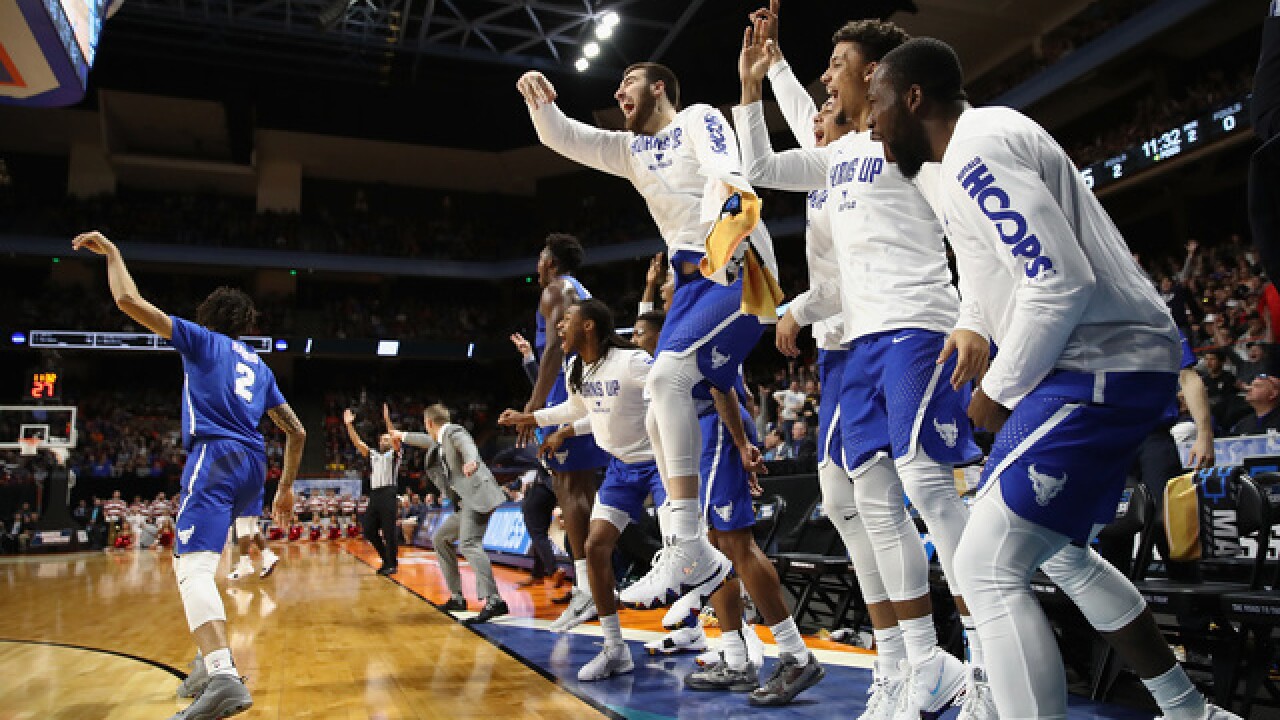 Copyright 2018 Scripps Media, Inc. All rights reserved. This material may not be published, broadcast, rewritten, or redistributed.
Ezra Shaw
BOISE, ID - MARCH 15: The Buffalo Bulls bench celebrates a three point basket in the second half against the Arizona Wildcats during the first round of the 2018 NCAA Men's Basketball Tournament at Taco Bell Arena on March 15, 2018 in Boise, Idaho. (Photo by Ezra Shaw/Getty Images)

For the first time in program history, the UB men's basketball team has won an NCAA Tournament game... and the win couldn't have been any sweeter.

The Bulls, the 13th seed in the South Region, beat 4th seed Arizona 89-68 in the NCAA Tournament's Round of 64 Thursday night. The game was played in Boise, Idaho.

The Bulls struck first off a CJ Massinburg three-pointer to begin the game. They maintained that lead throughout the first eleven minutes of play before Arizona's Rawle Alkins hit a jumper to tie things up at 21 with 8:28 left in the first half. The Wildcats took their first lead of the game on the next possession off a steal. It was back-and-forth for the rest of the first half before Wes Clark hit a three-pointer with less than 20 seconds on the clock to give the Bulls a 40-38 lead at the half.

In the 2nd half of play, the Bulls started off like they did in the first half with Massinburg getting the scoring going and hitting a three right off the bat. Arizona though took their first lead of the game less than three minutes in after Dusan Ristic hit a jumper to give the Cats a 46-45 lead.

It was Wes Clark's layup though on the next possession that put the Bulls back in front and they never looked back.UB took their first double digit lead of the game off a Jeremy Harris three-pointer with 11:24 left on the clock and maintained that double digit lead for the rest of the game.

The Bulls ended with four players in the double digits, led by Clark wih 25 points and seven assists. Harris added 23 points and seven rebounds while Massinburg added 19 points while Nick Perkins had 13 points off the bench.

The Bulls now advance to the Round of 32 and will be back in action on Saturday, March 17th. They'll take on 5th seed Kentucky. The winner will advance to the Sweet Sixteen.