UB falls short of a Sweet Sixteen trip, falls 95-75 to Kentucky in round of 32 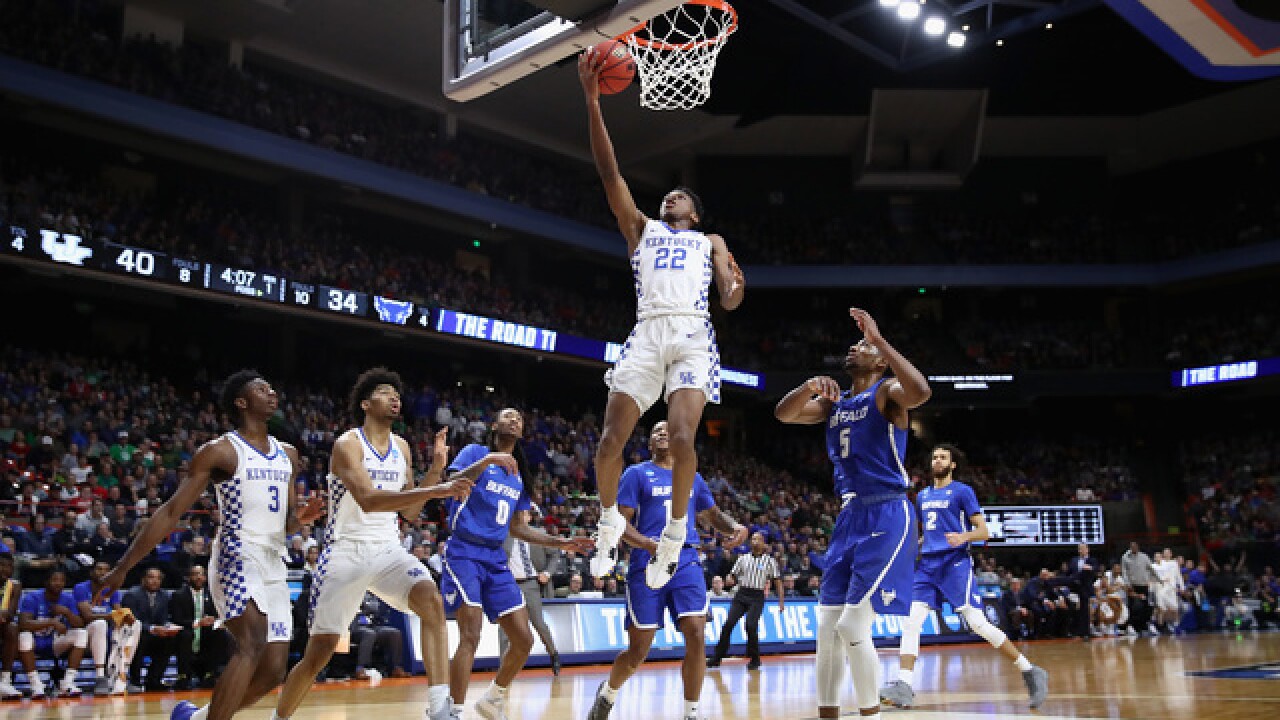 Copyright 2018 Scripps Media, Inc. All rights reserved. This material may not be published, broadcast, rewritten, or redistributed.
Ezra Shaw
<p>BOISE, ID - MARCH 17: Shai Gilgeous-Alexander #22 of the Kentucky Wildcats shoots the ball during the first half against the Buffalo Bulls in the second round of the 2018 NCAA Men's Basketball Tournament at Taco Bell Arena on March 17, 2018 in Boise, Idaho. (Photo by Ezra Shaw/Getty Images)</p>

Two days after winning their first ever NCAA Tournament game, the UB men's basketball team saw their season come to an earlier end than they had hoped.

The Bulls, the 13th seed in the South Region, fell to 5th seed Kentucky 95-75 in the Round of 32 on Saturday. The game was played in Boise, Idaho.

The two teams traded baskets in the first few minutes but Bulls starter Ikenna Smart, after scoring the team’s first four points, picked up two quick fouls and had to sit out for the majority of the first half.

Kentucky made a 12-5 run to lead it 16-9  but the Bulls came back and made it a five point game following a CJ Massinburg three-pointer with seven minutes to go. The Wildcats, however, never let the Bulls re-take the lead, leading them 51-42 at the break.

In the second half, the Bulls cut the deficit to single digits after Dontay Caruthers hit his first basket to make it a 56-48 game and it was Wes Clark hitting a three-pointer with 16:46 left to cut the deficit to six and force a Kentucky timeout. The Wildcats though once again started to pull away throughout the next few minutes and maintained that lead, holding a 67-59 advantage with just ten minutes left in regulation.

The Bulls never stopped fighting, continually cutting the deficit to five or six points many times. Caruthers, on a breakaway, hit a layup and drew the foul to put UB within five with 8:00 to go but Kentucky once again had a response with a three point play of their own.

The Wildcats once again made it a double digit game with seven minutes left and built an 80-67 lead after another three point play with 6:29 left on the clock. The Bulls were never able to come back from that deficit as the Wildcats held on for the win.

Clark led the Bulls with 26 points and six assists. Massinburg ended with 18 points and eight rebounds while Jeremy Harris chipped in with 10 points.

The Bulls end the season with an incredible resume. They finish with a 27-9 overall record (the most wins in program history) that included a MAC Tournament Championship and the program's 3rd bid to the NCAA Tournament. They won their first NCAA Tournament game in the Round of 64 following an 89-68 win over 4th seed Arizona.