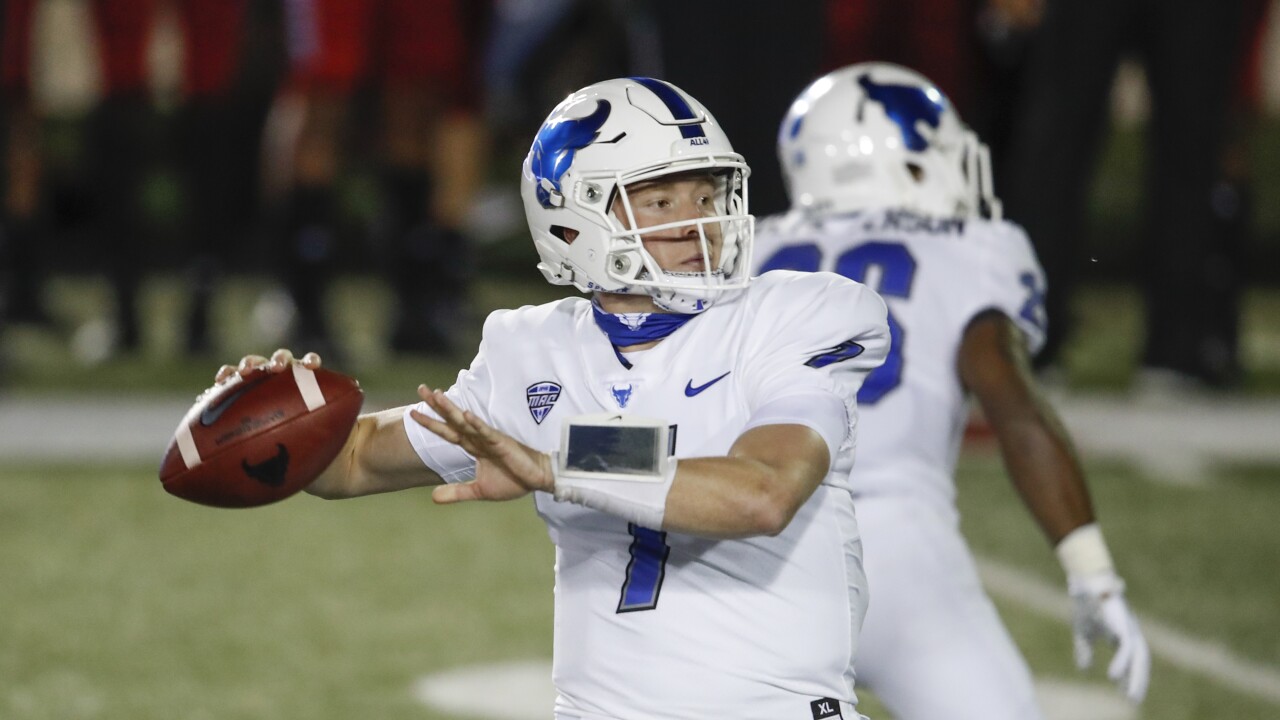 Kamil Krzaczynski/AP
Buffalo Bulls quarterback Kyle Vantrease (7) looks to pass the ball against the Northern Illinois Huskies during the first half of an NCAA football game on Wednesday, Nov. 4, 2020, in DeKalb, Ill. (AP Photo/Kamil Krzaczynski)

AMHERST, NY (WKBW) — University at Buffalo QB Kyle Vantrease set a career-high and RBs Jaret Patterson and Kevin Marks reached milestones as the Bulls dominated Miami (OH) 42-7 Tuesday night. With the win, the Bulls improved to 2-0 on the season.

UB struck first in the 2nd quarter and never trailed. Patterson scored the team's first touchdown of the game on a two-yard run and then extended their lead later in the quarter after Trevor Wilson caught a 78-yard pass from Vantrease. After leading 14-7 at the half, the Bulls exploded in the 3rd quarter, with three unanswered touchdowns. They held the Redhawks to one field goal over the last 32 minutes of game clock.

Vantrease threw for a career-high 353 yards in the win and became the first UB quarterback to throw for over 300 yards since Tyree Jackson in October 2018.

Patterson, who set a school record last week for most career rushing touchdowns, set another record tonight and reached a milestone. His 38th career touchdown (rushing and rec.) is a new UB record and in exceeding 3,000 career rushing yards in the second game of his junior season, is the fastest UB running back to reach the 3,000-yard mark.

Kevin Marks led the ground game with 16 carries for 109 yards and surpassed 2,000 career rushing yards. The Bulls had two wide receivers surpass the 100-yard mark in Antonio Nunn [137], who set a career-high, and Wilson [103]. The Bulls defense allowed just ## total yards on the night.

The Bulls will be back on the road next week when they travel to Bowling Green (0-2) on November 17th. Kickoff is scheduled for 7 p.m.