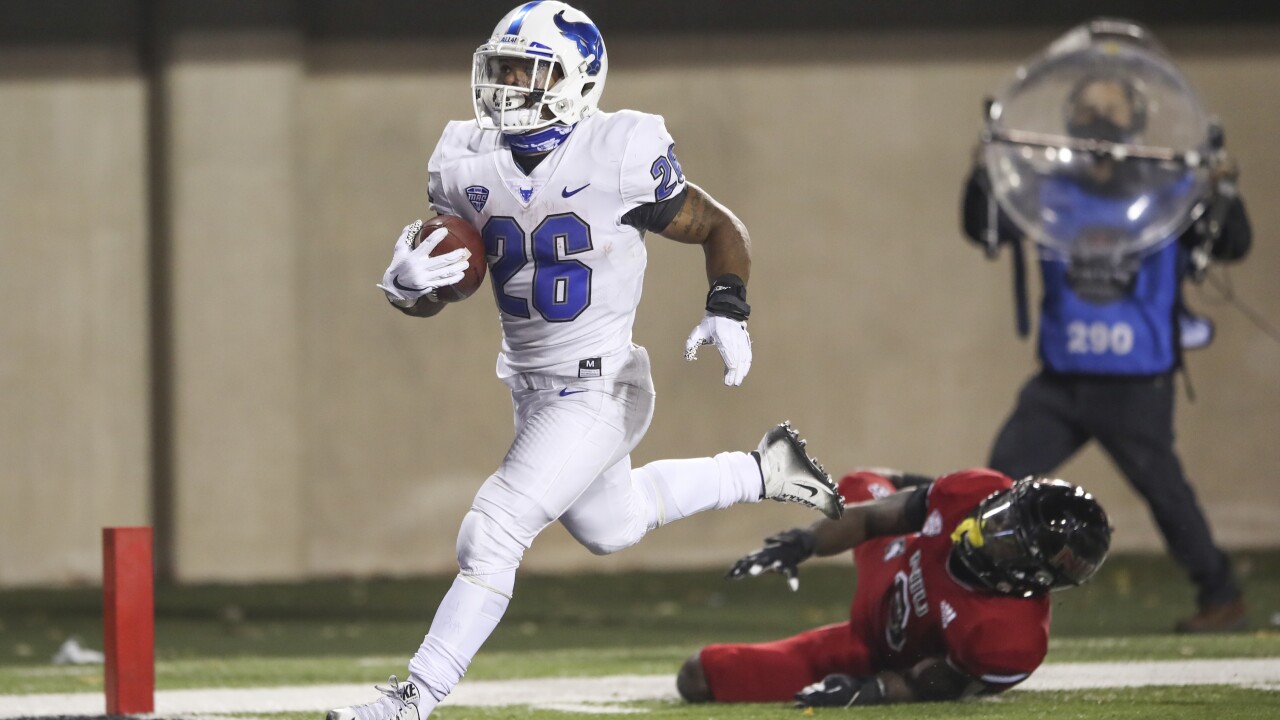 BUFFALO, NY (WKBW) — One game down, five more to go. The University at Buffalo football team topped Northern Illinois 49-30 Wednesday night to move to 1-0 on the season, more than a month after the Mid-American Conference reversed their decision to cancel the 2020 season. The Bulls' win over the Huskies was their first since joining the MAC.

After the UB defense forced a 3-and-out to begin the game, the UB offense didn't take long to capitalize on great field position. Jaret Patterson scored the team's first touchdown of the season from five yards out to give the Bulls a 7-0 lead. The touchdown gave Patterson career no. 34, which tied the school record. Northern Illinois responded with a 43-yard field goal to make it a 7-3 game but once again, UB wasted no time. After recovering an onside kick attempt, the Bulls stormed down the field and capped off a seven-play, 61-yard drive with a 17-yard TD catch from Antonio Nunn to put the Bulls up 14-3 after 1Q.

After the Huskies cut into UB's lead once again thanks to a short field, the Bulls extended their lead before the half was up. Patterson, already with a touchdown in the first quarter, added his second of the game on a 56-yard run. That touchdown marked the 35th of his career, which set a new school record. UB led 21-16 at the half.

The UB defense came up big in the 3rd quarter, capitalizing on two NIU turnovers. Tim Terry Jr. was in the right place at the right time, scooping up a fumble by QB Ross Bowers and returning it for a 46-yard touchdown to put UB up 28-16. A minute later, Isaiah King scooped up a fumble by RB Erin Collins and returned it 42 yards. The UB offense got back to work on their next drive with QB Kyle Vantrease picking up his first rushing touchdown of the year to put the Bulls up 42-16 after 3Q.

SCOOP AND SCORE 😳@BigGucci_Tim takes the fumble back all the way back for the 46-yard touchdown! @UBFootball I #MACtion I https://t.co/7NvUXCfblX pic.twitter.com/v3cgtQ1AVH

The UB defense continued their dominance, adding a pick-six early in the 4Q, their fourth turnover and third defensive touchdown of the half. They gave up two late touchdowns that wrapped up the game.

The Bulls offense was led by running back Jaret Patterson who rushed for 137 yards on 20 carries, finishing with those two touchdowns. Along with setting a new school record for career rushing touchdowns, the junior is also just 51 yards shy of reaching 3,000 career rushing yards. Kyle Vantrease finished the night completing 11-of-17 passes for 175 yards, two total touchdowns, and an interception. Antonio Nunn surpassed 100 receiving yards, finishing with 102.

The Bulls defense, finishing with those two touchdowns in the third quarter, finished with four turnovers on the night.

UB will play at home for the first time this season on Tuesday, November 10th when they host Miami (OH). Kickoff is scheduled for 8 p.m.