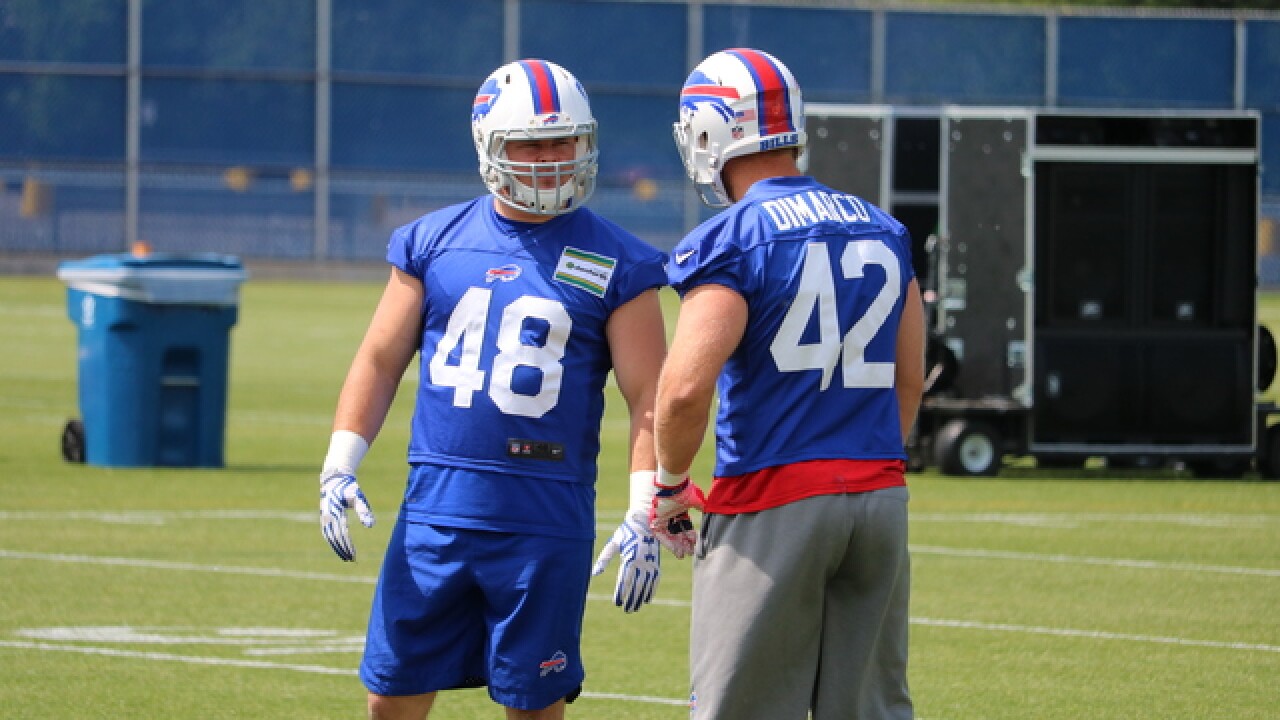 The roads of Harmony, Minnesota are unforgiving.

With a population of just under 1,000, the majority of the streets in the "Biggest Little Town in Southern Minnesota" remain unpaved. The combination of snow in the winter and rain in the spring wreaks havoc on the integrity of the roads and vehicles both, especially for a mode of transportation that so many children in the area depend on -- the bus.

That's where Zach Olstad comes in.

Dating back to his high school days, Olstad spent the past seven summers bringing these buses back to life, helping pristine each one for the next school year.

"First job is to pressure wash a ton of inches of mud," Olstad said, before simulating the sound of spraying water coming out of the hose. "Right under 'em, and it's just dumping on you. It's very dirty work."

The 24-year-old grew up on a farm and was no stranger to the amount of hard work he'd have to put into the job. He even has grown to enjoy it.

"Basically we wrench 'em up, sand 'em all down, paint 'em up, get on a creeper, and sandblast under 'em. It's dirty work, but, it's just kind of the roots I've been molded by," he said. "Anything basically that you need to do to get a bus ready, we can do it."

Olstad was gearing up for summer number eight, and then, much to the dismay of the buses back home -- the Buffalo Bills threw a wrench of their own in those summer plans.

The NFL Draft had come and gone, as did the initial rush for teams to land priority undrafted free agents. All that remained around the country, for so many athletes hoping for a chance to continue their career, was the deafening sound of silence of their cell phones.

Olstad, a standout fullback at Division II Winona State, was right there with all the rest waiting and hoping for an opportunity. The odds were slim enough as it is, but even more so for a small school player at a position that doesn't bring about a ton of offers in today's NFL.

Even so, the Harmony, Minnesota native kept himself ready just in case. He was lifting weights at his local high school when that NFL silence ended.

"My agent texted me and was like, 'The Bills are calling in ten minutes.' It felt like 35," Olstad recalled.

The Bills offered him a chance to stand out as a tryout player during the team's rookie minicamp. That same night he got the offer, Olstad got to work.

He asked for the expertise from those that have been there. And it wasn't just from any ordinary player; he looked to perhaps the best tryout success story in recent memory.

It just so happened that he had been working out with Minnesota Vikings receiver Adam Thielen, who went from a 2013 Division II rookie minicamp invitee out of Minnesota State, to a Pro Bowl wide receiver in 2017.

Thielen's message to Olstad was short and sweet.

"He said, 'You've got to know the playbook and then play fast,'" Olstad said.

The 'play fast' part wouldn't be a challenge for the revved-up fullback. The other part of Thielen's advice was something he was determined not to let trip him up.

Olstad finally made it to Buffalo, and the night before his big audition, he crammed.

Olstad remembers the conversation he had with his parents right before he took off for Buffalo.

"Ok, we'll see you in a couple days," Heath and Melanie Olstad said to their son, knowing the standard NFL protocol was to fly the tryout players back home once the event was complete.

"I'll see you in a month or two," Olstad confidently responded, hoping that rookie minicamp wasn't his only chance -- even if his carry-on told a different story.

"I came out here with a backpack. Just a bunch of clothes and cleats," Olstad fondly recalled. "It was like a backpack, not a duffel bag because I didn't want to pay for luggage. I didn't know {the Bills} paid for luggage, to be honest."

With that small backpack, his advice from Thielen, four hours of sleep, and his confidence, Olstad took to the field.

As he promised himself that he would, Olstad played fast. He knew the playbook. He linked up with fellow rookie and quarterback Josh Allen a few times throughout the practice. And for all those reasons, caught the eye of the coaching staff in the process.

Of the 30-plus players invited on a tryout basis only, the Bills offered a contract to Olstad and only Olstad.

Zach wasn't coming home anytime soon, just as he said to his parents before he left for Buffalo.

"My parents were bawling," he said of the first phone call home to let them know the news. The Olstads had already bought a bunch of Bills gear upon hearing their son even had a tryout -- let alone with an NFL contract in hand. "They're bought in already. They're part of #BillsMafia. They haven't been able to witness what goes on around here. But they're the type of people that are going to totally embrace this culture."

As he awaits his parents to drive into Buffalo with some supplemental clothes for his closet besides that original backpack of gear, for now, he proudly lives in team-provided Bills gear as he tries to make a career for himself.

"And they do laundry here, so that's awesome," Olstad said with a laugh and a smile from ear-to-ear.

Laundry that won't soon have inches of mud caked on it thanks to that fateful phone call, and a prepared Olstad at his tryout in early May. While he admitted that he might even give a few hours of his time between minicamp and the start of training camp to help out the bus operation with some less rigorous work out of loyalty, Olstad is living out the dream he set out for himself long ago.

"I'm not going to take a day for granted, because if I wasn't here I'd be back right now cleaning buses," he said. "I'm humbled by them giving me the opportunity and I plan on making the most of it."