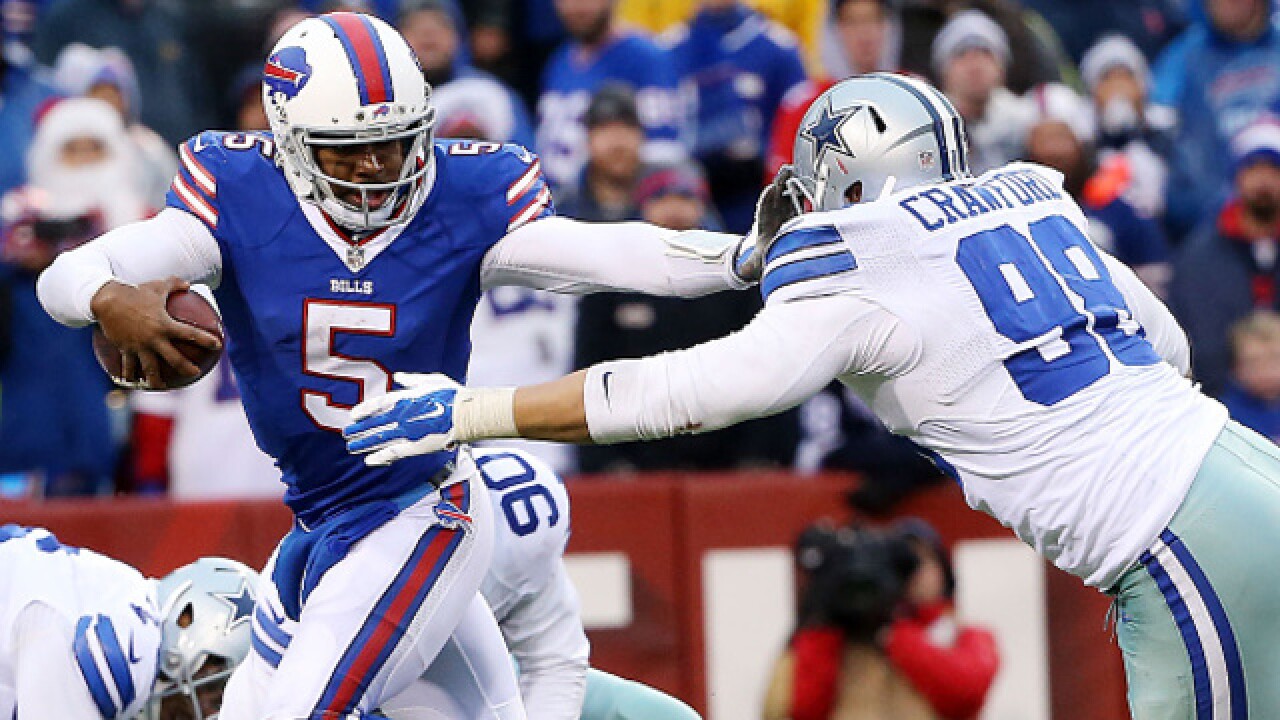 Tom Szczerbowski
<p>ORCHARD PARK, NY - DECEMBER 27: Tyrod Taylor #5 of the Buffalo Bills pushes off on the facemask of Tyrone Crawford #98 of the Dallas Cowboys during the second half at Ralph Wilson Stadium on December 27, 2015 in Orchard Park, New York. (Photo by Tom Szczerbowski/Getty Images)</p>

The Buffalo Bills have an unquestioned starting quarterback heading into the 2016 season in Tyrod Taylor -- that much is certain. As for beyond the 2016 season, well, that's another story.

Taylor is entering the final year of his contract with the Bills, and as competent starting quarterbacks in the NFL go, he is massively underpaid. While others are making $15 million per season and more, Taylor is on the books in 2016 for $3.133 million.

The Bills have said they are open to negotiating an extension that makes sense for both sides, but still with a year left on his deal and only one year of starting experience under his belt, the team appears content to wait.

And based on some comments from Taylor's agent, Adisa Bakari on Sirius XM Thursday, the two sides appear to be quite far apart -- seeing as how Bakari ripped the Bills on a public forum.

Tyrod Taylor Agent @AdisaBakari: The #Bills didn't go the playoffs last year because of discipline and the defense. TT was exceptional.

There was also a report that the quarterback-hungry Denver Broncos inquired about acquiring Taylor from the Bills, but that wouldn't necessarily make the most sense from the Bills. Benjamin Allbright of AM-1340 in Denver reported the Broncos interest in Taylor.

It's been my opinion all throughout the process that the Bills should take all the time that they need to make a long-term decision on Tyrod Taylor. They still have a full year to make that judgment, and to see if he improves in the areas that they want him to.

If he does, great. Then they should sign him and move forward with him as the starting quarterback. If they still have some questions, or if negotiations get a little testy, then the Bills always have the franchise tag to use at their discretion.

However, Bakari's public comments will not go over well within the building at One Bills Drive. No matter how much merit his argument has, it's clear the two sides aren't playing nice right now.

It's an agent's job to build up his client and maximize his value when in contract negotiations. And while I'd argue against Bakari's use of "exceptional" to describe Taylor's play in 2015 based on the eye test, not numbers, it's clear that Taylor wasn't anywhere near the problem last season.

Even still, it's a pretty interesting negotiating ploy by Bakari to criticize the team that you want to maximize money from so harshly. In the end, it probably won't matter much in the negotiation process, but it's a good barometer of where the two sides are at the moment.

As for the reported Broncos interest, Denver can inquire all they want. The Bills can listen, but, unless they get completely floored by an offer, they shouldn't -- and wouldn't -- deal away their clear starting quarterback in a year that they are desparate to make it to the postseason. Especially not when all they have on the roster is EJ Manuel, and whichever rookie they draft in late April.