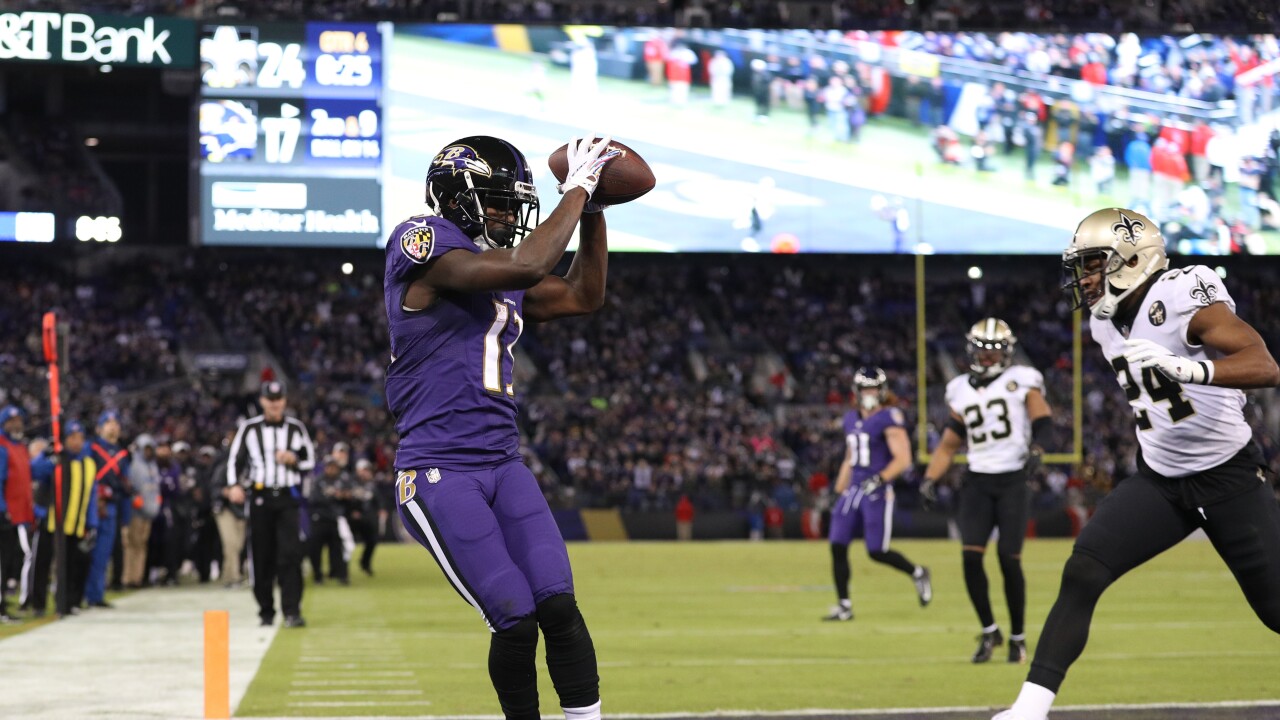 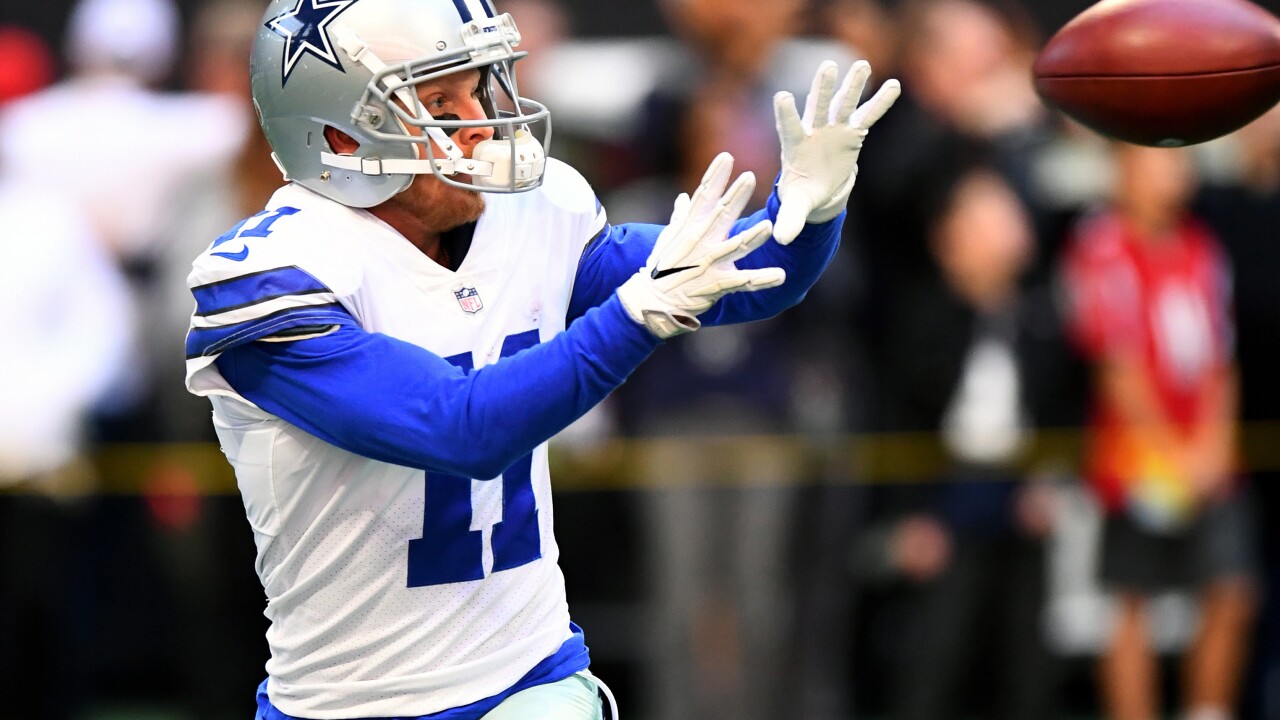 (WKBW) — Heading into the offseason, the Buffalo Bills had a clear need to add talent on the offensive side of the ball to help young quarterback Josh Allen succeed. They agreed, and in a big way.

After being deep in talks to acquire Antonio Brown last week only for it to fall through, the Bills found two additional receivers on the free agent market to help out their young quarterback. According to multiple reports, the Bills will sign both wide receiver John Brown and slot wide receiver Cole Beasley to contracts when the free agent period opens up on Wednesday at 4:00 pm.

According to Ian Rapoport of NFL.com, Brown will get a three-year contract worth a total of $27 million from the Bills, while Beasley will make $29 million over a four-year deal, per Mike Garafolo of NFL.com. The duo joins Zay Jones and Robert Foster to form the team's new top four of receivers that Allen will have to throw to in 2019 and beyond.

After an injury-plagued final season with Arizona in 2017, Brown hooked on with the Baltimore Ravens and brought in 42 receptions for 715 yards and five touchdowns, while averaging a whopping 17 yards per catch. Brown is 28 years old.

On the other hand, Beasley will turn 30 years old in April, but has remained a consistent target in Dallas since his second season back in 2013. He leaped forward in his role in 2015, and since then, has put together three seasons of 50-plus receptions out of four.

Beasley is a slot receiver by trade and became a clutch target for them by winning over the middle and in shorter areas. His career high in receptions came in 2016 when he brought in 75.

With the moves, the Bills have now added five free agents to their offense with Brown, Beasley, tight end Tyler Kroft, center Mitch Morse, and running back Frank Gore.

Joe B's Take
- After a day full of clamoring for the Bills to do something at wide receiver, Bills fans got their wish within ten minutes as the team doubled their dependable targets for the young Josh Allen.

We'll start with Brown, who is an incredible fit for not only Brian Daboll's vertically-based offense, but for a big-armed quarterback like Josh Allen who the Bills encourage to push the ball down the field. The Bills had a speed threat emerge down the second half of the season in Robert Foster, but Brown comes in with tons of starting experience and a proven track record.

Most importantly, Brown enters the Bills starting lineup after having averaged 17 yards-per-catch in 2018, which is a remarkable number that is a testament to how quick of a player that he is. With his size, you wouldn't expect him to be just an outside receiver, but that has been Brown's strength throughout his career.

Especially early on with the Arizona Cardinals, Brown became an impact rookie not only for his ability on go routes deep down the sideline, but he also showed fantastic footwork to gain separation on the remainder of the route tree. He is more than just a deep ball receiver, but it's the speed that made him such an appealing option to pair with the likes of Allen.

I think it's likely that he immediately becomes a fixture in the starting lineup while playing a high percentage of snaps for the Bills. But it's also fair to wonder where this leaves Foster.

The Bills still really like the now second-year undrafted receiver, but he had such a small sample size of success that would make depending on him in an enhanced role as somewhat of an unwise move. He had plenty of success when motivated by being cut by the Bills in the first two months, only to work himself back on to both the roster and in the wide receiver rotation.

However, to ignore the first half of the season when the motivation was lacking, and Foster didn't show the most dependable hands, would be equivalent to sticking your head in the sand. At this point, Foster is still a developmental wide receiver that will figure into the rotation if he earns it through the spring and summer. My guess, though, is that his snap percentages go way down and is more of a number-four wideout type.

As for Beasley, the Bills desperately wanted to upgrade their slot receiver position, and found one of the most dependable in the NFL to do so for Allen. Last season, the team had a few failed options in the slot.

In Isaiah McKenzie, the Bills received a flash of potential now and again, but also mixed in with faulty hands as the opportunities increased. The Bills drafted Ray-Ray McCloud in the sixth round, and he went from having a role in the offense to being a healthy scratch quite quickly after not taking advantage of his opportunities. The Bills even tried Zay Jones in the slot, only to find that he was more effective as an outside receiver and could win on his routes more in that role.

Beasley may be 30 years old, but slot receiver is one of those positions where the players don't age as rapidly. The emphasis is not as much on speed, but more about being a route running technician and gaining separation with quick cuts in the short areas of the field.

Beasley's impact with Dallas goes above and beyond his statistics. He had two 65-plus catch seasons out of the last three and was a go-to target on third downs for the Cowboys.

Also, when you consider the offenses that offensive coordinator Brian Daboll has come from in the past, having that shifty slot receiver to help the quarterback with easy completions in space is an asset. That's what made finding a slot receiver such an important one -- and the Bills have a high-end one in Beasley now.

You also might be wondering, what does this mean for Zay Jones?

The Bills love Jones' work ethic and think that he took a definite step forward in the second half of the 2018 season, so I would expect his role to remain mostly unchanged for the team going into the season. However, now in his third season, this is the year that Jones must leap forward in progress with on-field production.

He's no longer just a young guy that they need to see flashes from occasionally. The Bills need to see if Jones is a player they can depend on moving into their future.

With a quarterback that showed signs of life late in the year, there are no more excuses for the second-round pick. 2019 has to be a year with sizable gains in consistency, or else the Bills will need to make moves to find another player that can contribute.

While I wouldn't completely rule out the idea of drafting a wide receiver early because Brandon Beane adheres to value above all else, I do believe the additions of both Brown and Beasley -- along with the presence of Jones and Foster -- makes it unlikely that the Bills go after that position with a substantial draft resource.

Day Three picks are a different story, but the Bills now have a stable of complementary options in place of having a premier number-one target. It's something Beane discussed publicly at the combine, and how he didn't subscribe to the theory of needing a number one, and now he has what they hope to be a stable of selfless receiving targets for Allen to find on any given play.

That's not to say Beane would say no to the notion of having a number-one on the roster, considering that the Bills were deep in talks to acquire Antonio Brown. However, when that no longer became an option, Beane instead decided to go the complementary route to find the values in free agency.

As with any free agent contract, I'll stress not to judge Brown's three-year, $27 million deal, or Beasley's four-year, $29 million pact. The details of the deals are so important, especially in terms of the signing bonus, and how easy it is for the team to get out from the contract two or three years into the deal.

Until then, just from a football perspective, the Bills made Allen's life much easier on Tuesday in all of ten minutes.