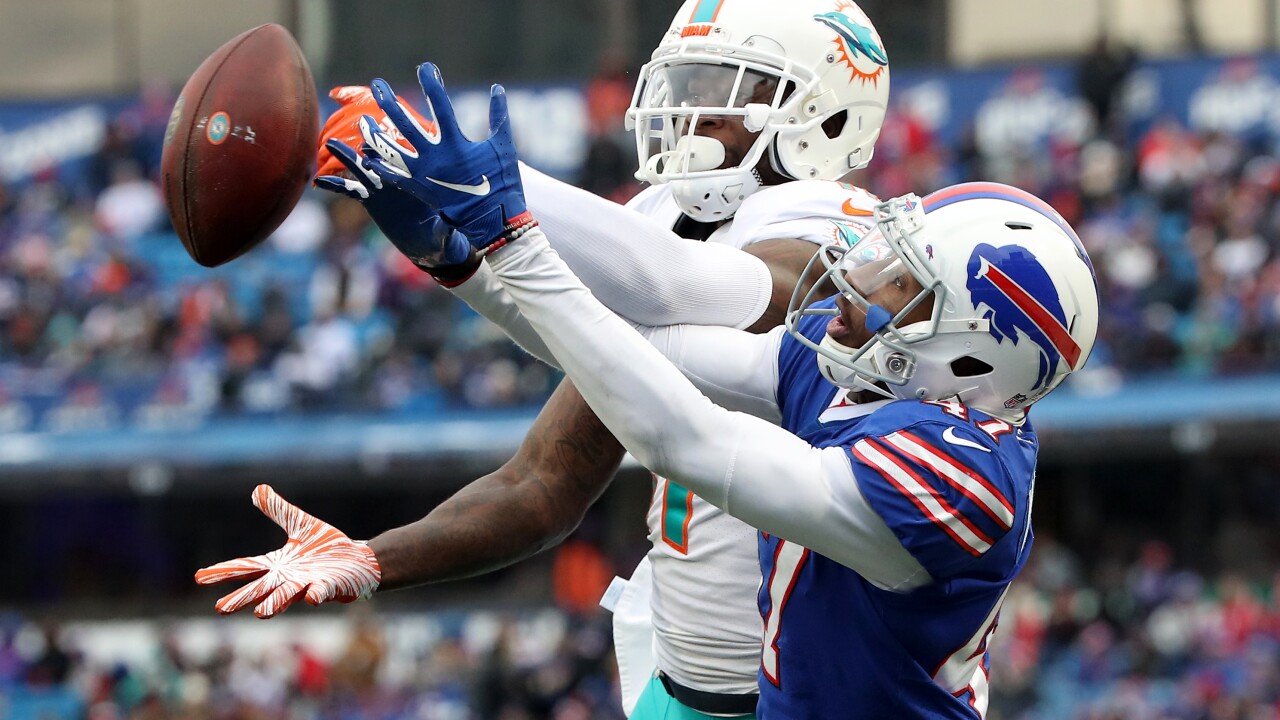 (WKBW) — Clouds darkened, hovering above One Bills Drive as a flash of rain ripped through Orchard Park. Water sprinted from the sky in buckets, though it was fleeting. The rain resolved quickly but left its mark. Dampened ground served as a lingering reminder of the storm — albeit an unintentional metaphor for the subject.

Inside an office sat Sean McDermott. The Buffalo Bills head coach is usually measured when discussing his players -- an approach that doesn't get breached very often, but there are occasional breakthroughs.

For one, there was Kyle Williams when the longtime Bills veteran chose to retire following the team's last game in 2018. A special case. However, the topic of the day wasn't about a 13-year veteran that won over the city.

On this day, though, it was for a player that hasn't even cemented a starting job, someone that was barely into his second season in the NFL -- which goes to show how much Levi Wallace's story has impacted his head coach.

McDermott raised his hand in the air.

"Through the highs and lows of life and the highs of lows of his football career, he's always remained like this," the coach said, as he slowly moved the raised hand from stage right to left on a level plane.

"Steadfast in his beliefs. Very poised as a young man going through the ups and downs and the scars of life that we've learned so much from."

By now, most know his on-field story out of high school. A zero-star cornerback recruit out of Tucson High School without a Division I offer to speak of, only a hope to walk-on with the perennial title game participants, Alabama. It was a shared favorite school between Wallace and his father, Walter -- though a task so ambitious that some would brand as foolish.

"You're not going to tell a kid he can't do anything -- and especially a kid like Levi who is just so motivated," said Wallace's coach at Tucson High, Justin Argraves. "In high school, he didn't have the size -- a taller kid, lankier kid, but he was skinny. Wasn't the fastest kid, so he got overlooked."

Wallace defied those odds, fueled by a lack of respect. He wanted to prove that he belonged. He did.

"At this point, I feel like I'm born with it," Wallace said. "I feel like I always have to prove myself."

A learned birthright that found even more motivation while enrolled in college to push further past becoming an impact starter at Alabama.

Fuel also brought on from two of the worst moments of his life.

The first came during his initial year on campus in 2014. His father battled ALS back home in Arizona while Wallace was playing intramurals during the fall semester. After being dissuaded by his father from giving up on his football aspirations because of what was happening in Tucson, Wallace returned to Alabama in the spring to officially begin his walk-on journey.

Wallace made it to the spring game in 2014, a testament to his abilities while sharing the field with behemoths of the past five years of recruiting classes. The school scheduled the game for April 19, 2014.

On April 18, 2014, Walter Wallace passed away at the age of 58. Remarkably, his son Levi chose to play in the game the very next day to honor his father.

Unfortunately for Wallace, his father's passing was only half of the tragedy that had a profound effect on him while in school.

The other isn't known by many outside of Tucson, but an impact that he symbolically wore on his jersey at Alabama, and one that he'll continue to do as he suits up for the Bills in 2019.

For that story, you have to go back near the beginning for Wallace, when he was five years old. Wallace and his best friend, De'Antae Fuller, were inseparable. He considers the Fuller family as his own family, too.

An ultra competitor, he recalled a day where his ambitious fire went a bit too far at the expense of Fuller.

"I was like maybe nine or ten years old. I was playing my best friend, and I hit him extremely hard. He had to get carted off the field. I didn't know that I hit him that hard, but he wasn't getting up. He was fine after, but, that's just the competitiveness in me," Wallace recalled. "When we put the helmets on... we'll be friends after. Maybe I should have toned it down back then, but that's just who I am."

Luckily, that didn't deter the duo from doing just about everything together, as it had been for years ahead of it. Wallace and Fuller played football together, they ran track together and most importantly, were forging an unforgettable bond.

"Where De'Antae was, Levi was. Where Levi was, De'Antae was. They're real tight. And they were both tremendous. De'Antae was just a freak athlete in high school. Tremendous football player. It was real fun. You've got two kids who were best friends, who were super athletes," Argraves said. "It's cool to see friendship when somebody plays at such a young age, and they worked their way up to high school. You don't see that a lot of times now."

On the field at Tucson High, Wallace was the team's top cornerback and Fuller the team's top safety. Even in football, they were always right near one another.

When Wallace went to chase his dream to walk-on at Alabama, Fuller -- a year younger than his best friend -- remained at high school for his senior year to trumpet what he knew was the destiny of his best friend.

"He was one of the first people to ever believe in me that I was going to be here," Wallace said. "Even before I was even in the NFL, or I was there in Alabama, he was like 'I can't believe me my boy is gonna be in the NFL one day.' I wasn't even starting [at Alabama] yet. Just to have that confidence in me was everything."

For two years, Wallace lived the life of a walk-on, never seeing action on game days in either his freshman or sophomore seasons. Ahead of what became the season that changed everything, his junior year, Wallace's foundation had been rocked once more.

De'Antae Fuller, his best friend since the age of five, was shot multiple times and murdered in the parking lot of a Tucson apartment complex.

Fuller was killed on Easter Sunday -- March 27, 2016 -- not even two years removed from the day Wallace's father had tragically passed away. Fuller was 20 years old.

To this day, the case remains open. Fuller's killer still has not been caught.

"I don't think any coach, or teacher, or parent is ready to say goodbye to a 20-year-old young man -- and especially in the manner that it happened," said Argraves, who coached both Wallace and Fuller. "How do you respond? Like I said, most kids don't have the inner drive to respond to that. [Expletive], most adults don't have it. That'd be hard for most adults, nevertheless a 21-year-old kid."

The heavy-hearted Wallace returned to Alabama with a new motivation. To honor his fallen best friend in the best way he knew how -- by fulfilling that prophecy Fuller had for him before Wallace even earned a scholarship with the Crimson Tide.

"I play with him in mind, because I know he loved football just like I did. He was even a better athlete than me. I thought he could be in the NFL just as well," Wallace said. "I play because it was his dream as well."

The first step, earn his way on to the field at Alabama. Nearly five months to the day that he lost his best friend, Wallace received a scholarship, announced right from the lips of Alabama head coach Nick Saban.

He went on to become a key special teams contributor, and one of the top depth players in the secondary in his junior season.

Wallace's second step was to crack the starting lineup. He successfully worked his way up the depth chart as a senior, and became an impact starter for Alabama, helping them to yet another national championship.

The third, getting to the NFL -- and making good on Fuller's belief in him.

Once again, Wallace had to prove himself with the essential walk-on route of the NFL -- trying to make it as an undrafted free agent.

The Bills knew they had to make him a priority following the draft after speaking with current University of Tennessee head coach Jeremy Pruitt. Then the Alabama defensive coordinator, Pruitt went out of his way to recommend Wallace in a phone conversation with McDermott, saying that he believed the cornerback has a real shot to make it in the NFL.

Wallace signed with the Bills, impressed them all summer in training camp, continued to do so into the fall on the practice squad, and wound up starting the final seven games of the 2018 season.

And all along, he did so with Fuller by his side.

It isn't any coincidence that he chose to wear the number 39 at Alabama, nor is it that he again decided to do so in Buffalo for the upcoming season.

Wallace's favorite number growing up was 32. When the two were teammates at Tucson High School, Fuller wore number 8.

Combine the two, and you get 40. To complete the tribute and equation, Wallace arrived at 39 by subtracting 1.

Wallace remains close with the Fuller family. His best friend's mother, Patty Fuller, even made it to a Bills game last season.

Fast-forward to the spring of 2019, and there's Wallace, as steady as the line McDermott drew with his hand. Adorned in his new number-39, the cornerback faces a similar situation -- having to earn his starting spot all over again.

The team signed two veteran cornerbacks in Kevin Johnson and E.J. Gaines to compete with him, even after having such a promising rookie season.

"Competition makes the best out of everyone. It's nothing new. At Alabama they were five-stars and I was a walk-on," he said. "At this point, it's my story."

It's that story, though, that has earned him respect from the primary decision makers at One Bills Drive.

"He has the same approach as last year as an undrafted kid. 'I'm fighting for this thing.'" Bills general manager Brandon Beane said. "Yeah, I started at the end of the year, but there's competition here. Someone is gonna have to knock me out. I'm not just going to give this spot up because I was undrafted.'"

No matter the challenge, Wallace remains the same.

"His mental makeup is unique," Bills defensive coordinator Leslie Frazier said. "That's what makes him rare. At such a young age, to be able to put things in the proper perspective and then to move on to what's important. That's not easy to do. Some guys get bogged down in the minutiae. He's not one of those guys."

"He's so motivated to be the best that he can," said Argraves. "Dude, after everything that he's gone through and what he's shown so far, I don't think there's anything that can stop him."

And at the end of each storm, be it personal tragedy or overcoming long odds on the field, Levi Wallace remains -- motivated and steady, honoring the legacies of his father and best friend.