Joe B: State of the Buffalo Bills roster heading into the 2018 preseason finale 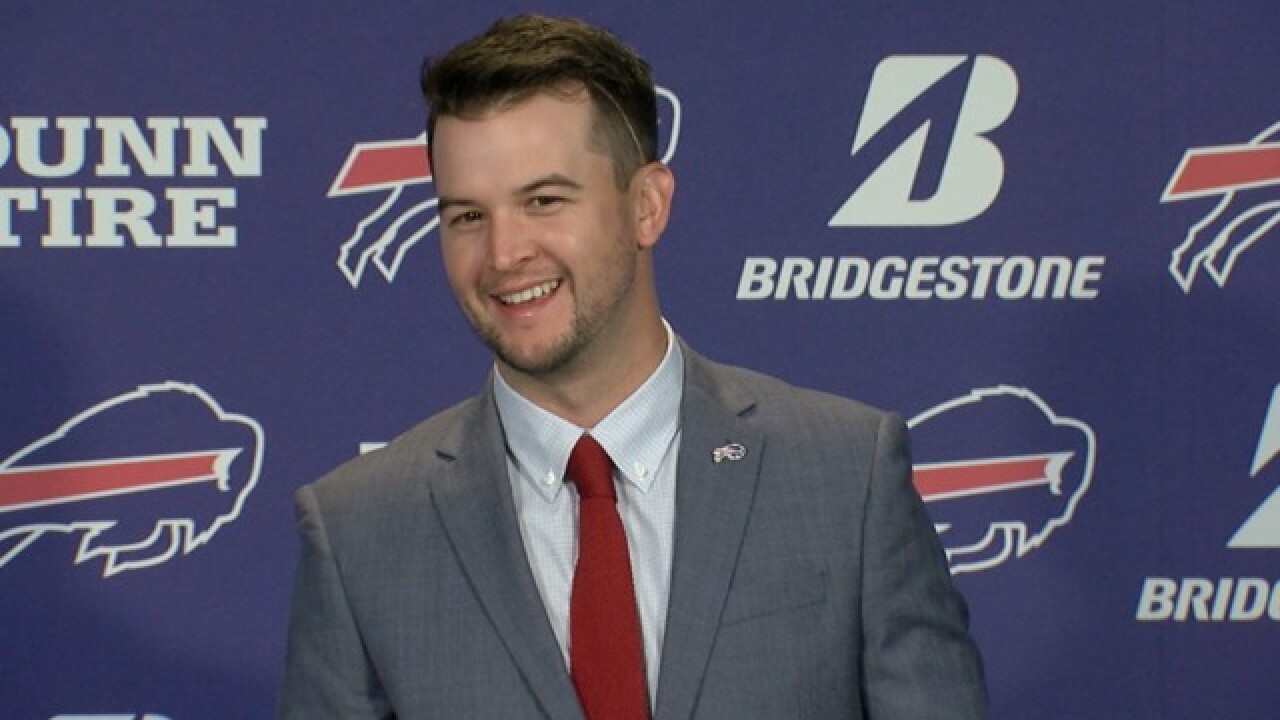 It's getting close to decision time for the National Football League, and more specifically, the Buffalo Bills. There is only one more game in the preseason, and by the time the contest is over and done with, the Bills will begin the process of whittling down their roster to 53 players.

At the time of this post, the Bills have 87 players left on the roster, which means a whopping 34 have to be released by Saturday at 4 pm. The fourth preseason, to its core, brings an evening where everything is on the line for about a third of the roster.

All the players that are serious candidates for the roster have only one more chance to make a final impression, and plenty of game time to do so.

Considering the stakes, I wanted to bring you a state of the roster heading into it, mostly focusing on the actual bubble players in the upcoming game. You'll also find the 'locks,' 'near-locks,' and those 'on the outside looking in.'

First, let's eliminate players from the bubble with those categories as mentioned above, shall we?

Near-locks (6)
RB: Taiwan Jones
WR: Andre Holmes
TE: Khari Lee, Jason Croom
WLB: Ramon Humber
CB: Vontae Davis
- These are the players that are likely to make the team, but there is a reasonable doubt as to their final inclusion when the Bills set the roster after the waiver period over the weekend. The addition of veteran cornerback Vontae Davis may be a slight surprise, though his play of late has questioned whether there is a place in the starting lineup. Running back Taiwan Jones seems to have come close to cementing his role as a key special teams player, and the potential of tight ends Khari Lee, and Jason Croom has vaulted them ahead of two players the Bills rostered in 2017. These six players leave only 11 spots left, with another 43 to consider, which means we need to eliminate some more before the real bubble.

Bills on the Bubble
QB: AJ McCarron
- Putting AJ McCarron on this side of it may surprise you slightly, but if the Bills decide that Josh Allen can be the starter or the backup, with Nathan Peterman likely to get the role Allen doesn't, that leaves McCarron in a 'what do you do with him' type of bind. McCarron wanted to be a starter, but Peterman has outplayed him. With all the poor backup quarterback situations around the league, a cost-controlled and competent backup like McCarron could be an appealing option heading into the season. On the Bills side, they could keep two quarterbacks and feel utterly content. It all depends on how the Bills feel about Allen.

RB: Travaris Cadet
- For this column, Travaris Cadet was closer to the 'on the outside looking in' portion than the 'near-lock' category, which means he is going to need a significant showing on Thursday to make the Bills want to keep him. Even if he does, five running backs is too much of a luxury and one that the Bills aren't likely to submit themselves to for the sake of the rest of their roster.

WR: Corey Coleman, Ray-Ray McCloud, Brandon Reilly, Rod Streater, Kaelin Clay
- Wide receiver is one of a handful of positions on this list that need the inclusion of at least one of the names along with it for the 53-man roster. There is the possibility of the Bills keeping two wide receivers, but one of these five names would have to show quite well in Chicago. Corey Coleman is in a battle with himself. If he can provide a spark against the Bears, a spot on the roster is waiting for him. As for the other four, McCloud likely has the edge leading up to the game as the sixth wide receiver.

TE: Logan Thomas, Nick O'Leary
- It isn't a guarantee that the Bills keep more than three tight ends, but it will receive a strong consideration due to offensive coordinator wanting to employ multiple two tight end looks in his scheme. Khari Lee and Jason Croom have passed both Nick O'Leary and Logan Thomas, which means those two are fighting for a spot on the team. If the Bills include another tight end, The slight edge goes to O'Leary, whose blocking ability might be too good to pass on.

OT: Marshall Newhouse, De'Ondre Wesley, Conor McDermott
- Another position the Bills have to keep at least one, and offensive tackle has provided some competition as the summer has played out. Conor McDermott looks like more of a practice squad type, but the offensive line coach Juan Castillo really likes him and he can't be ruled out entirely. It comes down to Marshall Newhouse against De'Ondre Wesley, with the slight edge to Newhouse because of his experience and versatility along the line. Wesley is younger and has shown some flashes, so he has a chance, too.

G: Ike Boettger
- The Bills liked what they saw from Ike Boettger, enough to elevate him to the second-team offense. However, with two starters and a draft pick ahead of him, his bid for the 53-man roster will likely fall short unless an injury occurs at that position or elsewhere. He's a healthy practice squad candidate.

DE: Mike Love, Terrence Fede
- Ultimately, I don't believe that the Bills will keep a fifth defensive end on the team, but as Trent Murphy continues to nurse a groin injury, you can't rule it out completely. Undrafted rookie Mike Love would be the best bet of the two to make the team if they included a fifth defensive end, as he has shown flashes of potential while rushing the passer in both training camp and preseason games. Terrence Fede is a veteran player with some versatility, but he doesn't provide the same spark as Love does.

DT: Adolphus Washington, Rickey Hatley, Tyrunn Walker
- The Bills must keep one of these defensive tackles, with the potential for two should Kyle Williams not be ready for the start of the 2018 season. Although inconsistent, Adolphus Washington continues to find himself on the right side of the roster mainly due to circumstance. He likely gets the nod this time around, but be on the lookout for the Bills adding another player at the position on the waiver wire to push Washington as the backup three-technique. Rickey Hatley and Tyrunn Walker both have a chance as a one-technique defensive tackle for the initial Week One roster if Kyle Williams is hurt and Harrison Phillips has to switch to three-technique in place of the veteran.

MLB: Julian Stanford, Tanner Vallejo
- The battle between Julian Stanford and Tanner Vallejo seemed to be coming to a close, but then Stanford suffered a nose injury and is now labeled "week-to-week." Still, his special teams ability will likely keep him on the right side of the bubble as the Bills have to keep at least one of these two. As for Vallejo, it's just a matter of the Bills and if they want to keep a seventh linebacker just in case. With the Bills not playing a lot of base defense as it is, they could make the argument that they could get by without a true backup middle linebacker until Stanford gets healthy enough to play. Vallejo needs a good showing on Thursday.

CB: Lafayette Pitts, Levi Wallace, Breon Borders
- The Bills probably have to keep one of these three, although we did see the organization flirt with only having four cornerbacks on the team at certain times of the year. The Bills, if they don't feel strongly enough about their depth, could even keep only four initially and then add one through the waiver wire this coming weekend. Between the three they have, Lafayette Pitts offers the most on special teams but has shown discrepancies on defense, Levi Wallace offers the most on defense but hasn't played many special teams this summer, and Breon Borders is more of a mix of the two. If they keep one, it all depends what they want out of their fifth cornerback.

S: Dean Marlowe, Siran Neal
- I included Dean Marlowe, even though he was closer to 'near-lock' status to me, but the wild card here is the draft pick factor. The Bills spent a fifth-round selection on Siran Neal, so should they be feeling the heat of only being able to keep one safety, they might opt for Neal over Marlowe. I don't think that will be the case, seeing as how Marlowe has played well in working with the second-team defense for most of the spring and summer. Neal's spot on the roster isn't guaranteed, either, but being a draft pick certainly helps his case to be an active-but-inactive-on-gameday type. The Bills have to pick at least one of these two.

P: Colton Schmidt, Jon Ryan
- The punting competition will come down to the wire because Jon Ryan only had one opportunity to punt the ball in the team's third preseason game. Since they have a bevy of evidence as to who Colton Schmidt is at this point, I'd expect to see a lot of Ryan on Thursday as they try and pick their favorite punter.

So, 27 players for 11 spots. That's what indeed makes the fourth preseason game an entertaining one for roster nerds like me, to see who can sway the opinion of the front office enough to garner a spot.