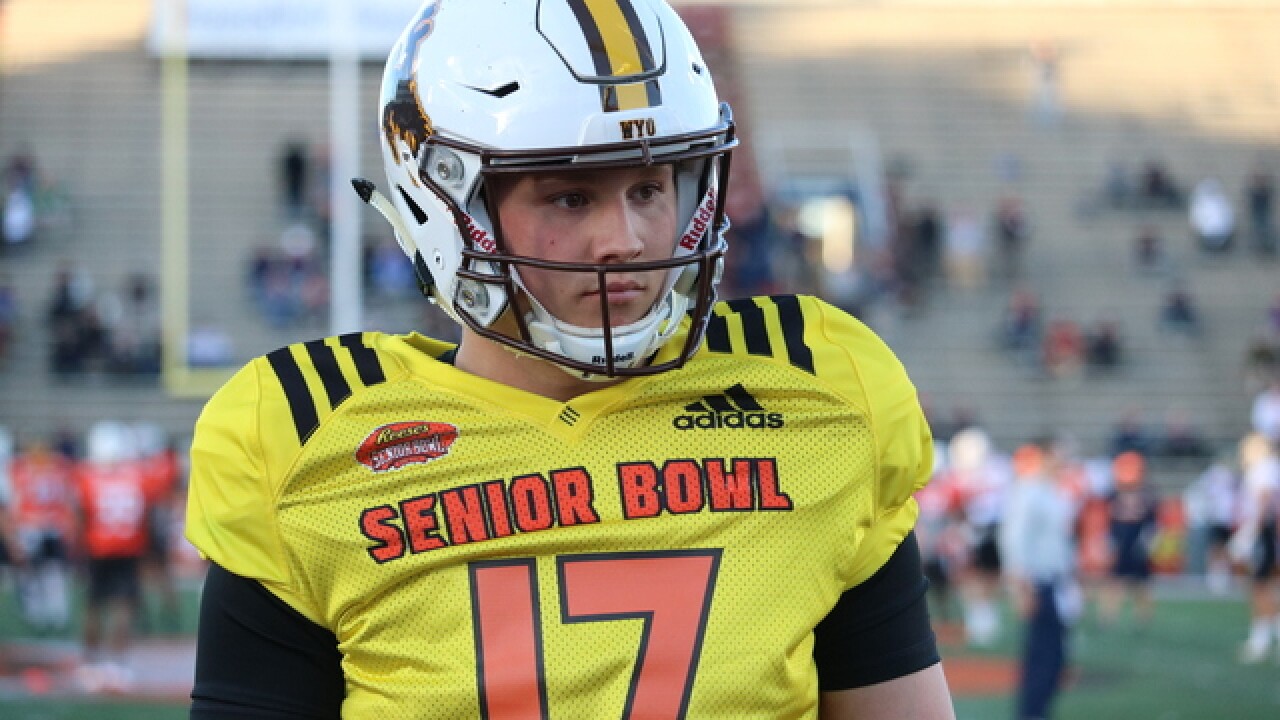 For months on end, the Buffalo Bills have been angling for a quarterback to build a franchise around. And after making a bold move up the board to secure their guy, the Bills have entrusted Wyoming quarterback Josh Allen with the keys to the franchise in hopes that they can make him into the quarterback Buffalo has waited a long, long time for.

Before we dig into the player, first the trade. The Bills dealt both of their second-round picks to move up five spots in the order to give themselves a chance to take Allen, clearly a player they looked at as a potential franchise guy.

The move, only giving up those two late second-round picks, is a great one for GM Brandon Beane because it keeps the Bills in the first round at 22nd overall, with the ability to land another potential starter in this year's draft at a position of need. Furthermore, not panicking as the draft was unfolding and keeping all of the team's 2019 selections in their pocket is of equal importance, considering there could be a regression from last year's record to this one.

Now, to the player... and this is a complex discussion.

On one hand, the Bills are trusting their gut and making a huge move up the board to make Josh Allen their quarterback of the future, and really betting on themselves to make it work. Beane has been betting on himself his entire career in the NFL, and he's doing it again this time around in selecting Allen.

What they're getting is a big ball of clay to mold as they see fit. He offers up two elite traits -- his incredible arm strength, along with an incredible contact balance that you don't see often -- much in the way that Ben Roethlisberger can bounce off would-be tacklers to keep plays alive. To be clear, I am not comparing him to Roethlisberger, just that that part of their game is similar.

He's got the size that teams and GMs covet, and he shows flashes of absolute brilliance by not only making throws that no other quarterback in this class could think about making but to do so with ease. On top of that, he shows some promise in play action, and he has shown at least some ability to go through his progressions. He also has shown some comfortability in the pocket, which is a prerequisite for Beane and what he looks for in a quarterback

Allen can make all the sideline throws in the smallest of windows, he doesn't take sacks that often and has the athleticism to get up the field and gain some positive yardage. He does take chances, but on the upside, he gives his receivers a chance to make a play -- even if they didn't have a lot of great talent around him.

However, this is a player that needs to be refined -- there is no doubt there. Allen's struggles with accuracy are well documented, and despite making throws that no one else could make, he also can struggle in routine areas of the game that will drive you absolutely insane. The stat that many will allude to is not completing over 60-percent of his passes, which is a marker many  people use where if it isn't met, it's easier to predict a lack of success at the next level.

Besides that, when Allen drops back, there are many times where everything -- from the depth of the drop to the read, to the throwing motion -- and then the final decision is lacking to where you sit there and think to yourself, 'Josh, what the heck were you thinking?'  In that sense, he is the exact opposite of Tyrod Taylor. There is no throw that Josh Allen fears making, which is a massive change from what existed in Orchard Park over the last three years.

Before Wednesday night, it also seemed like a pretty solid fit from a personality standpoint, too. Allen was reportedly all in on football and a noted tireless worker by many accounts. Until his tweets from five and six years ago were unearthed, he was along with USC's Sam Darnold as perhaps someone the Bills would like to build around from a face of the franchise standpoint.

Again, that was until Wednesday. Allen's insensitive tweets, whether it's fair or not -- and whether or not it's due to his immaturity as a 16-year-old, will be a topic of conversation that he must address with the Bills, his new teammates, and to bury any reservations his teammates would have for it. That is quite important for him to establish right away, especially if the Bills are going to look to him as a team leader from here on out.

This is the ultimate prove-it player for Brandon Beane and head coach Sean McDermott. He has the incredible ability, and if they bring him along correctly, they could have one of the best in the league. If he is what he has shown to be in college -- an unrefined passer with all-world ability -- this will be a bust and it could be a job-defining miss for Beane.

All of the goodwill the Bills have built up over the past year will now be put to the test. It's time to prove that Allen was the right guy, especially with a well-establish and polished passer like Josh Rosen still on the board waiting to be picked.

The gumption of Beane to sit and wait to strike for the guy he believed in, and to make a dramatic move for the quarterback he wanted to build around should be applauded. The Bills just need to prove that they were right and that most everyone in the bubble of social media that weren't crazy about Allen was wrong.

It might not have been what every fan wanted, but it surely will be fascinating to track over the next two-to-three years at least.