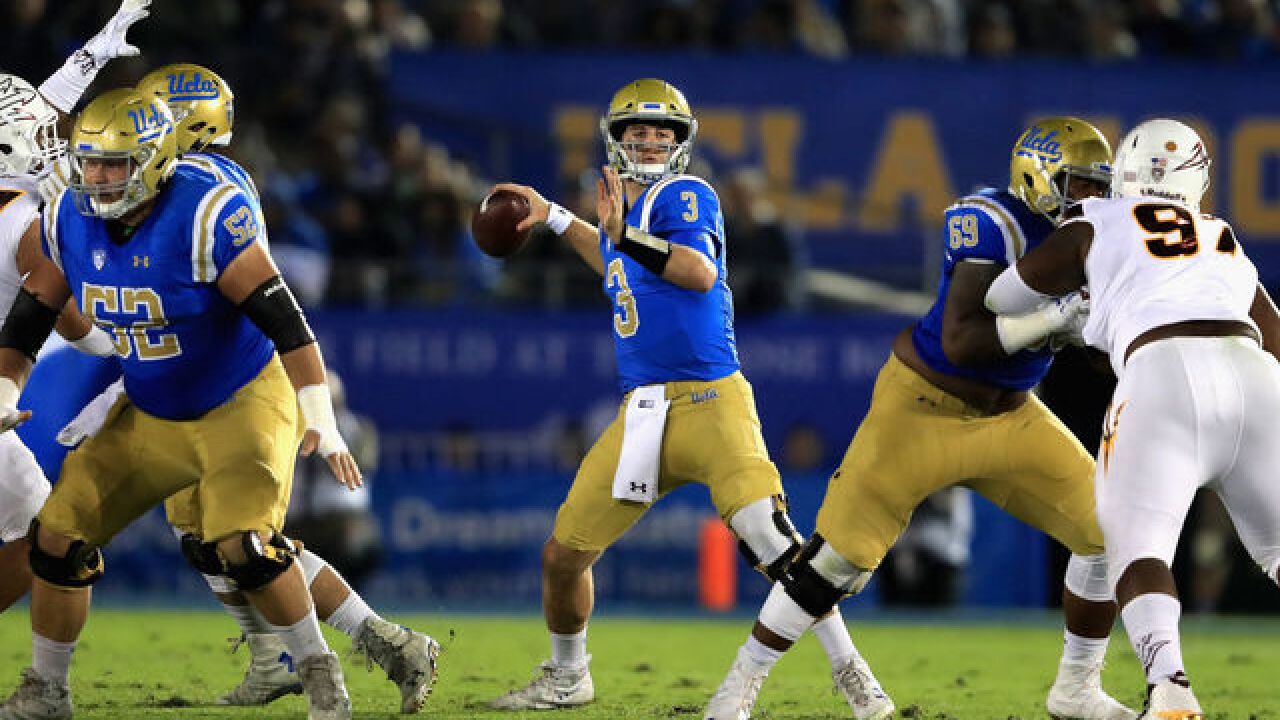 Copyright 2018 Scripps Media, Inc. All rights reserved. This material may not be published, broadcast, rewritten, or redistributed.
Sean M. Haffey
<p>PASADENA, CA - NOVEMBER 11: Josh Rosen #3 of the UCLA Bruins looks to passes during the first half of a game against the Arizona State Sun Devils at the Rose Bowl on November 11, 2017 in Pasadena, California. (Photo by Sean M. Haffey/Getty Images)</p>

The 2018 NFL Draft is coming into focus now with the fateful day just two weeks away -- which means we're just 14 days away from the answers that this time of year always yearns for.

Will the Buffalo Bills land their quarterback? If so, how high do they have to climb up the draft order to get a player at the position that they covet? While those answers could come sometime ahead of the draft, it's most likely that a trade up the board will likely come on draft day.

In this version, the Bills do just that. Where did they jump to this time, and for which quarterback? My fifth mock draft of the offseason:

- The Josh Allen rumor is persisting and gaining even more steam since this time last week. Considering they have the top overall selection, the reasons to deceive from their true intentions aren't nearly as great as any other selection in the first round. They clearly want a quarterback and it would be foolish for them to move down and hope for their guy to be there at 4th overall. The only possible reason they would have for the Josh Allen rumor would be to get a team to deal up to 1st overall for a huge amount of picks, but, that again seems unlikely considering they have been using their picks to improve for this year. The more this rumor persists, the more likely it becomes.

- With the Cleveland Browns going for Josh Allen, the Buffalo Bills decide to give up whatever they need to accomplish three things. The first and most obvious, is to get a quarterback they can build around into the future. The second, to provide the Giants with a compensation package that will get them to bite and make them believe they are getting a chance to build this year, and then by punting on taking a quarterback this year, double the chance to land one next year if they so choose. Third, to keep a semblance of a normal draft in 2018 to help build the roster with young talent around the quarterback -- and with this trade, the Bills would hold the 2nd (1st round), 56th (2nd round), 65th (3rd round), 96th (3rd round), 121st (4th round), 166th (5th round), and 187th (6th round) overall selections. With those top four picks, they're likely to grab at least two-to-three potential starters to help out this season. As for Sam Darnold, it's really tough to argue against a player that exhibits every single trait teams would want out of the quarterback position. He has great arm strength and the ability to make all the throws, he is the best improvisational quarterback available in this class and showed he can do a lot with a muddied pocket, he also goes through his progressions on the field in the confines of the pocket, and from a personality perspective by many reports he carries himself like a veteran NFL player. Underscoring all of it, he's wrapped up into a human being that isn't even old enough the legally drink until early June which will make teams believe his potential is sky high. Plus, knowing Sean McDermott's personality, the Darnold combination seems to be quite a good fit. There is a lot of talk about his funky throwing motion, but with the velocity that he has, it won't sink him before he even begins in the NFL. There have been examples of quarterbacks in the league that has had success without a prototypical throwing motion. He'll need to learn to not evade the pocket as quickly as he might, and to not turn the ball over as much, but you don't want to take that part of his game out completely because his belief that he can always make a play is part of what makes him such an intriguing prospect. The Bills take Darnold here, and will allow him and A.J. McCarron to battle it out in the summer to see who will start the year at quarterback.

Be sure to go to Page Two for the Bills 2nd and 3rd round picks!

- There was a thought to put Josh Rosen here, but you also trust the knowledge of beat reporters -- and Manish Mehta of the New York Daily News seems to be leaning towards the Heisman Trophy winner for the time being, so that's the way we'll play it here. Mayfield heads to New York and the Jets have an instant identity.

- The Browns stay at fourth overall and grab Bradley Chubb to form one of the most talented young pass rushing duo in the NFL with Myles Garrett.

- This is a bit of a surprise pick, but when looking at their depth chart the running back group is not overly impressive. If reports were true that the Broncos were even looking to deal C.J. Anderson this offseason, that would have made a gaping hole at the position. However, even the fact that they were considering it means they feel they could stand to upgrade the position -- which brings us to Saquon Barkley. While Quenton Nelson would also be logical, he is not as high an impact player as Barkley that can help Case Keenum and company immediately.

- It looks quite likely that three, or maybe even four quarterbacks could go in the Top Five, which leaves Indianapolis sitting pretty at sixth overall getting the second or third-best non-quarterback in the draft at sixth, and three second-round draft picks to play with.

- With needs at both cornerback and safety, the Buccaneers opt for the unique Minkah Fitzpatrick and figure out where he fits best as a playmaker.

- Just in case the Miami Dolphins or New York Giants get an idea to move up, the Cardinals move up the board to secure the services of Josh Rosen. With the combination of Sam Bradford and Mike Glennon, a young quarterback and plan for the future is necessary with the Cardinals and their new head coach.

- They probably should take one of the top two linebackers because it's a huge need, but the way the Raiders are operating under Jon Gruden, the principles of the NFL 10 years ago reigns supreme. With that, the Raiders go with the offensive tackle to plug in at left tackle for their young quarterback.

- The New York Giants move down and land an impact player to help them build back up in 2018. They desperately need an upgrade at the position, and whether he plays in the middle or at weakside linebacker, he'll be an instant contributor.

- The way Joe Flacco has performed over the past several seasons now, it would be wise for Baltimore to think about life after him before it's too late. Lamar Jackson would be a fascinating fit for them, and a nice way to pass the torch from Ozzie Newsome to Eric Decosta as they decide on a quarterback to build around together.

- Not wanting to wait around, the Vikings move up to obtain a long-limbed press-cover cornerback to pair with Xavier Rhodes.

- With plenty of ammo to move up, the Colts move ahead to secure the services of the second-best running back in the draft to be their lead guy in 2018.

- Once again moving up, the Colts now add three impact starters in the first round, and still, have a second-round selection to add a fourth. This is a haul by the Colts.

- He lasted all the way to 40th overall, but the Broncos still managed to get a quarterback out of the 2018 NFL Draft. As a second-round pick, there won't be an instant need to plug him into the starting lineup, giving Case Keenum time to play after he just signed a fairly big contract.

- I know what you might be thinking... not a wide receiver or a guard? What about the offense? Well, with Sean McDermott, having a deep defensive line rotation is of the utmost importance to his defenses. And right now, even though there are a pair of starters at the defensive tackle position, the depth is severely lacking -- not to mention that Kyle Williams may well be on his last year and they aren't going to want a drop-off to a rookie in the 2019 season if that's indeed the case. In Nathan Shepherd, they are getting a potential steal of not just a three-technique defensive tackle, but someone that can line up at one-technique, five-technique, and even chip in at defensive end. The trouble is, despite his size, raw ability to rush the passer from the interior, and potential, he needs some seasoning based on him playing at a much lower level in college. However, if he hits, the Bills could have a long-term starter at a high profile position in Sean McDermott's defense. He is a prototypical fit for McDermott's defense as a three-technique. As for wide receiver and guard, the Bills spent a third-round pick already on a wide receiver (Kelvin Benjamin), and at guard, the Bills still have an extra third-round pick, and their fourth-round pick to address the need. Shepherd was too good to pass up at this spot judging how the Panthers built up their teams in McDermott and Beane's time there.

(from NO) - WR Equanimeous St. Brown

- This is the second time I've paired the Bills with Josey Jewell, but the pairing makes all the sense in the world. His instincts give him an advantage against both the run and the pass, he's a good enough athlete to play the middle linebacker position in McDermott's defense, and he's a hard-working type that provided plenty of leadership at a young age at Iowa -- considering he was named a team captain as a sophomore. Jewell would be plugged into the starting lineup at middle linebacker immediately for the Bills, giving them a potential long-term solution at another high profile position in McDermott's defense. The pairing of Shepherd and Jewell would give the Bills a massive leg up in the long-term building of an outright weakness from last season: the front seven.