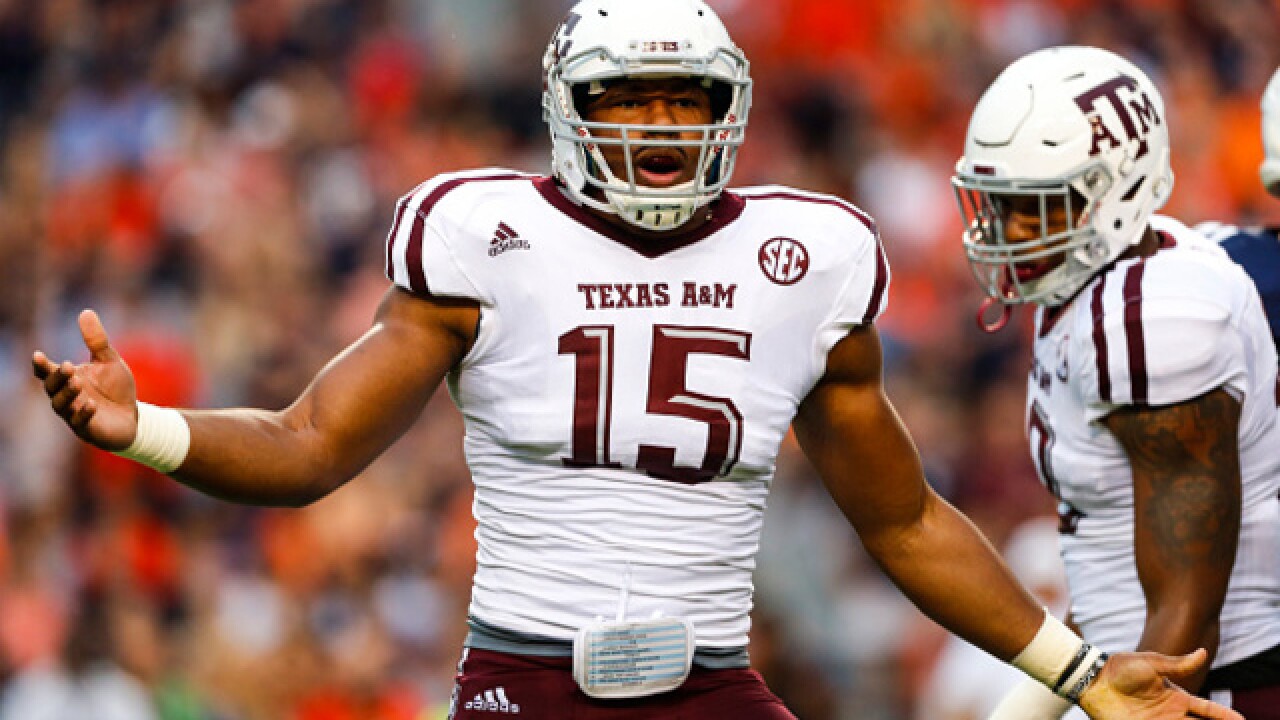 We've sifted through all the smoke and mirrors of the pre-draft process, we've considered all the possibilities, and most importantly, now we're ready to be completely shocked by what will unfold on Thursday night.

The 2017 NFL Draft is here, and with it comes my final prognostication of the first round -- and more importantly, for the Bills through the first few rounds.

For the final mock draft, it extends all the way through the Bills third round selection: 75th overall. What will the Bills do?

The final mock draft before the event gets started:

- The Browns might want Mitchell Trubisky, but in the end, I don't think it will be at first overall.

- Over the past week, it's seemed as though the 49ers have been linked to every possible prospect that a nearby team seems to have coveted, whether it be Mitchell Trubisky (Browns), Leonard Fournette (Jaguars), or Jamal Adams (Bears). Without anyone having the want to move all of those assets to the 49ers, they stick and add Solomon Thomas. Although, a big part of me wants to see them add Leonard Fournette just to shake the whole thing up.

- This came down to cornerback versus safety. While the popular sentiment around the league is that safety Jamal Adams is the 'cleanest' prospect in this draft, the Bears have to contend with Aaron Rodgers and Matthew Stafford within their division, on top of all the other really good quarterbacks in the NFC. Picking Lattimore, despite the hamstring concerns, makes the most sense because of the importance their defense puts on the cornerback position.

- I had Leonard Fournette slotted into this spot for a while, but the depth of the running back class along with the outright potential that O.J. Howard has to be a game-changing tight end for a long time makes me think the Jaguars could go for it.

- If the Browns feel really strongly about Mitchell Trubisky, you take him at first overall. If they feel *pretty* strongly about him, you roll the dice a bit to a point, and then capitalize when the potential trade becomes worth it in your mind. That's what happens here for the Browns with the Titans, who move down, pick up the top choice in the second round, and an extra second round draft pick while they're at it.

- It's time for the New York Jets to stop neglecting the offensive side of the ball in the first round of the NFL Draft. The offense, without a playmaker added of some sort, will certainly be in contention for the worst in the entire league. If Fournette gets down to sixth overall, he would provide the shot in the arm the Jets so desperately need, and give them a running back that has potential to become a star in the league pretty quickly.

- With the choice between both safeties, the Chargers opt for the one without an injury history -- even if Adams' ball skills aren't as well-developed as Malik Hooker.

- McCaffery can help the Panthers in both the run and pass attack, and that is how they'll justify using a top 10 selection on a running back -- which isn't really a widely accepted practice anymore in the NFL.

- This pick came down to Malik Hooker and Jonathan Allen, and with needs at both positions, Allen wins the tie because of how much the Bengals value their front seven. Linebacker is also in play here, but Hooker and Allen would both be too good to pass up to me.

- For all the talk about the Bills wanting to add a quarterback at 10th overall over the past few weeks, I still do not believe that they'd take one if they stay at the pick. If they were to move down in the order and pick up an additional early pick or two, then I would entertain the idea. Even then, though, I still believe Sean McDermott's mentality in entering this draft is pretty laser focused on one thing early on: improving this defense and fixing it with the players that best fit his scheme -- and that's just where Temple's Haason Reddick fits into the equation. Reddick morphed into an every-down defensive end for the Owls, but he's also played a little bit of everywhere on defense. At the Senior Bowl, he showed how fluid an athlete he is, and how well he could cover a tight end or a running back in the open field. He is a perfect fit for Sean McDermott's defense as a weakside linebacker right now, but he can morph into any role they want him to be. Plus, they can moonlight him as a pass rusher on obvious throwing downs, which brings another element to his game. McDermott craves versatility within his defense and being able to throw an offense off with jack-of-all-trade types so that way they won't have a handle on what's coming next. McDermott and the Bills believe they can win this year, and adding a speedy linebacker -- something the Bills don't have currently -- is something that the new head coach would value a great deal. Reddick is that player, and if he's available at 10, I think he is an incredibly strong candidate to be the pick.

- Surprise! The first round of the NFL Draft always gives us surprises, and this would be a relatively big one. The Saints are actually set up pretty well in this draft to take a swing on one of these young quarterbacks. They have an unquestioned starter in Drew Brees that will significantly help the development of the new quarterback. Plus, with as many early picks as they have, they can comfortably take the quarterback at 11, while knowing they are likely going to get two defensive starters with picks 32 and 42.

- The Titans trade down, get a second-round pick, and still get the top wide receiver on their board. As Michael Scott would say, "Win-win-win."

- Sensing edge rushers could be coming off the board sooner rather than later, the Dolphins move up eight spots to get the seemingly ascending Charles Harris, and to give them a young pass rusher to add to an aging group.

- With the cost being as minimal as it is to move up and assure themselves that they get the pick of the litter of offensive tackles in the draft, the Broncos make the move. Bolles has crazy athleticism and can turn into something really special if developed properly, but he's still a bit raw. A chance worth taking at 17th overall.

- Doing exactly what Miami did, Dallas moves up to secure an edge rusher that can help them almost immediately. The cost isn't too outrageous to move up nine positions, so the Cowboys -- who are in win-now mode -- decide to take the plunge.

- The third quarterback has his home. Deshaun Watson might be the most difficult player to project in the first round, because it seems like basically, all teams without a good, young starter at quarterback are in play in the second half of the first round. The Bears have to give up a next year's second to assure themselves that they get him -- and don't have to worry about Houston taking the guy they want. With the presence of Mike Glennon, it gives the Bears the time to develop Watson -- at least for a little while.

- Even if the Saints complete the trade for Malcolm Butler, the New York Jets still want to race ahead of Tennessee in this scenario to secure the services of the long-limbed and quick cornerback Kevin King.

- Ross going in the second round is more of a product of there being a strong wide receiver class and teams feeling like they can wait on the position. The 49ers need a little bit of everything, so taking the best player available here is the right play.

- The slide for Peppers ends here. The combination of Mahomes and Peppers going to the same team is both exhilarating and frightening to think about all at once.

- With the wide receiver market coming down the way that it has through the first 43 picks, that would give the Bills confidence in thinking they can wait on it while still finding an impact player at 75. And, like the first round, the Bills find an impact defender for Sean McDermott's zone-based defense. The Bills currently have both Ronald Darby and Kevon Seymour at cornerback, but there's a clear problem there: they don't fit the prototype of McDermott's normal cornerback. The profile of a McDermott cornerback is a player that's tall, has long arms, can tackle well, but doesn't necessarily need elite timed speed. Darby and Seymour are both smaller, short-armed cornerbacks. While one will remain the starter, I think there is a distinct chance one of them moves to nickel corner in this scheme to allow the prototypical cornerback -- if they add one -- to start on the outside. Cordrea Tankersley is a tremendous fit for McDermott's scheme, showing great instincts in zone coverage and he explodes towards the ball and can force turnovers. He is 6-foot-1, has over 32-inch arms, and is an aggressive tackler. The cherry on top? The guy's nickname is 'Tootie.' Perfect fit for McDermott and another potential impact defender has been added to the defense.

- I honestly have no idea where he's going to go in the draft due to the recent allegations. All I know is after the La'el Collins example, I didn't feel comfortable leaving him in the first round.

- With the Bills' final selection of this mock draft, at long last, I had them addressing a need on the offensive side of the ball. This pick came down to Taywan Taylor and Cooper Kupp of Eastern Washington, and the reason I opted for Taylor is really based on the Denver Broncos model we saw with Rick Dennison as offensive coordinator there. They had a versatile player that could play in both the slot and on the outside, and he also added a significant element to the passing attack with his run-after-catch ability. That player's name is Emmanuel Sanders. Now, Taywan Taylor still has work ahead of him in being able to play on both the inside and the outside, but one area that he has a distinct advantage over Kupp is in explosiveness and the ability to gain a lot of yards after the catch. That was the difference in picking Taylor over Kupp. Some believe Taylor is made solely to be a slot receiver, but I tend to disagree with that notion. I think that's his role right now, and he can develop into a lot more -- once he becomes an experienced route runner with NFL coaching.