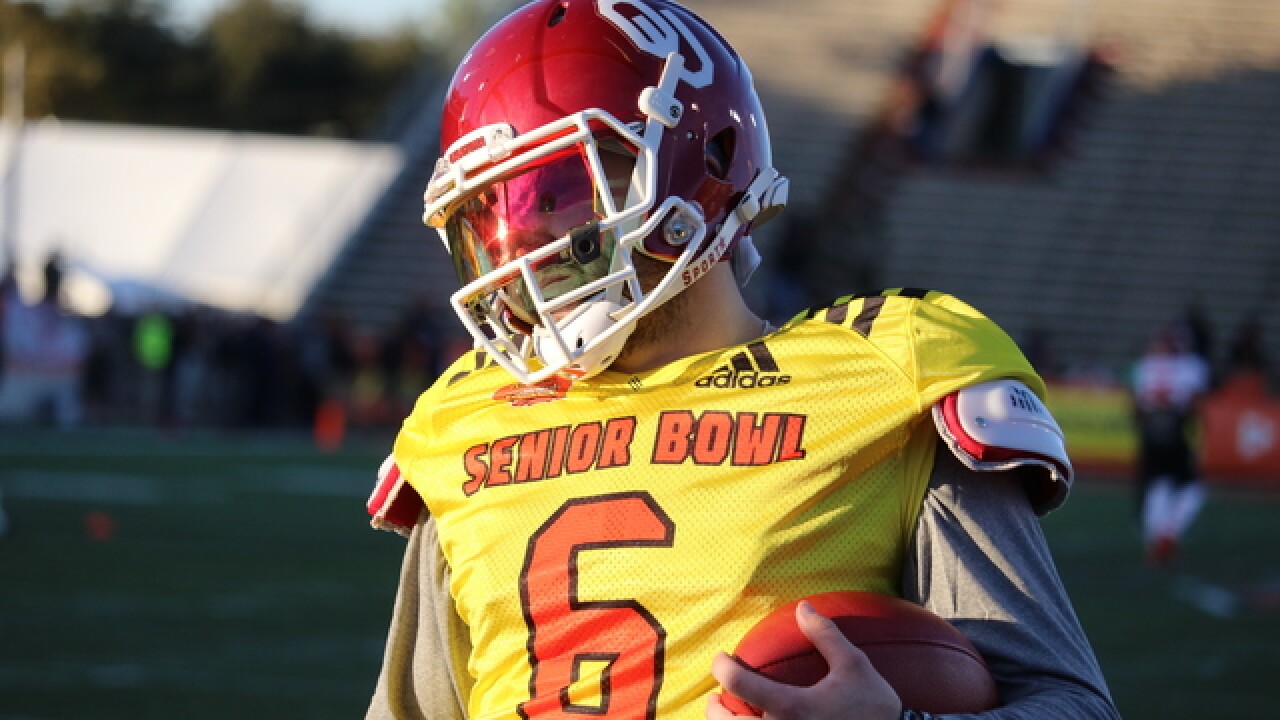 At long last, we have finally hit the month of April -- which means the 2018 NFL Draft is now kind of, sort of here. While it's still a few weeks away, at least it's closer, right?

The last time we left you, I had the 'What If?' scenario of the Buffalo Bills not being able to trade into the top 10, and losing out on the top four quarterbacks. This time around, the premise is 'What if the Cleveland Browns actually take Josh Allen?'

Do they still get their quarterback? Find out in my fourth mock draft of the 2018 offseason:

- All of this Josh Allen at first overall talk is quite interesting. At the end of the day, you would expect the Cleveland Browns to take Sam Darnold. However, the prospects and potential of Allen are immense to NFL GM types -- and he has a year to (likely) learn with Tyrod Taylor as the starter, and even with Drew Stanton as the backup.

- If Allen is gone, I think the Giants might just stay and take Sam Darnold to be their next generation quarterback. If the Browns select Darnold and the Giants aren't going to take any of the other quarterbacks, you'd have to believe the second overall pick is open for business -- as it should be. If the Colts received three second-round picks just to move down three spots, the Giants are going to be quite draft rich if they actually accept an offer.

- It would have been quite interesting to have both Allen and Rosen on the board here, but in this instance, the decision was made for the Jets. Rosen is their quarterback of the future in this scenario.

- Knowing how important it is to impact the passing game of the opponents, GM John Dorsey decides to pair last year's top overall pick Myles Garrett with another top-end defensive end prospect in Bradley Chubb -- while both are on rookie contracts.

- When the Broncos pass on Saquon Barkley, the Colts make the decision to stay there and take him -- giving Andrew Luck and the Colts a more well-rounded identity, while also keeping Marlon Mack in his current complementary role

- All seven of the top teams had a reason to stay and select the players that they did, so the Bills -- trying to stay in the quarterback derby, move up to select Baker Mayfield at a great cost. The price is a little bit more for a 12-for-8 swap than most years just because of the precedent that was set by the Colts-Jets trade. Even still, the Bills hang on to their other first-round pick, still keep a second-round pick, hang on to the top pick of the third round, and add an additional fourth-round pick since the Bears have a pair of them. As for the player, Baker Mayfield definitely encompasses every principle that Bills GM Brandon Beane has said he's looked for. He has the leadership intangibles they desire, he can win from the pocket, he's accurate, and he has really underrated arm strength. They also get a player that can get himself out of trouble with his legs. The Bills just have to be creative enough on offense to highlight everything he does well -- and considering offensive coordinator Brian Daboll just came from the college game where he dealt with two players that had differing styles, he's well-equipped to not only install some college principles, but you'd have to think he'll pair his scheme to the new franchise quarterback. It's an outright requirement. If the Browns go with Sam Darnold, I think the Bills will be firmly in the mix to trade up to second overall to land their quarterback of the future. I could honestly see it being Rosen, Allen, or Mayfield at this point -- they all bring something unique to the table that you can work with.

- Having Sam Bradford affords them the opportunity to bring along Lamar Jackson semi-slowly, but if this pairing happens, I would quite surprised if Jackson wasn't starting down in Arizona by the end of the season. The combination of Lamar Jackson, David Johnson, and Larry Fitzgerald could be quite fun.

- Not wanting to wait to see if he gets any closer to their original pick, the Panthers deal their additional third-round pick to secure the services of a player that will likely start for them immediately. Seattle has all the motivation to move down, without a pick in the second or third round.

- Knowing just how important interior pressure is to the success of Sean McDermott's defense, the Bills pickup a player that will take over a key role once Kyle Williams moves on -- which could be as early as next year. Hurst is the new-wave three-technique defensive tackle, disguising a little bit less weight on his frame with just an immense amount of ability to get in the backfield and either thwart a running play, or to get in the backfield for a pressure on the quarterback. Hurst can be a key rotational player in 2018, with the ability to stay on the field along with Williams on third downs. He can also help lessen the workload on Williams this season, and while he's still an effective player, it was clear that last season he could stand to benefit from less time on the field. Interior pressure is absolutely critical to Sean McDermott, and the long-term future and rotational ability this season is crucial to them trying to play a better brand of defense next season.

- After passing on Baker Mayfield, the Broncos see an opportunity to control Mason Rudolph's rights for five years -- as opposed to a normal four-year rookie contract -- and strike for a quarterback to put behind Case Keenum for the time being.