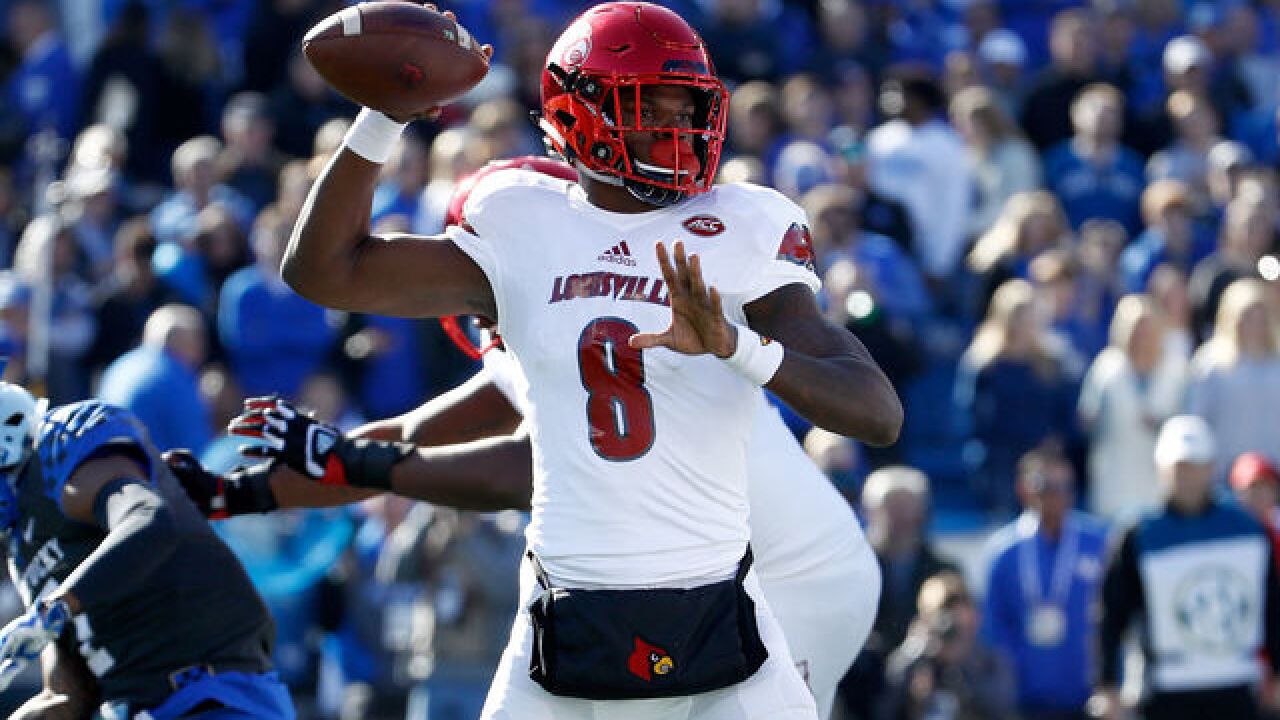 Copyright 2018 Scripps Media, Inc. All rights reserved. This material may not be published, broadcast, rewritten, or redistributed.
Andy Lyons
<p>LEXINGTON, KY - NOVEMBER 25: Lamar Jackson #8 of the Louisville Cardinals throws a pass against the Kentucky Wildcats during the game at Commonwealth Stadium on November 25, 2017 in Lexington, Kentucky. (Photo by Andy Lyons/Getty Images)</p>

Another week has passed, and it's time for another look at the NFL Draft and how it could all shake out for the Buffalo Bills and the rest of the NFL.

What will the New York Giants do at second overall? That's the biggest question as we're now just one month away from the 2018 NFL Draft.

For your viewing pleasure, my third mock draft of the season:

(*A reminder: Mock Drafts are, and always should be, for entertainment purposes only.)

- This looks to be getting fortified the closer we get to the actual day of the NFL Draft. Sam Darnold to the Browns looks to be among the "safest" bets right now. Past that, who the heck knows?

- Rather than trading away the second overall pick for a king's ransom, GM Dave Gettleman stands pat and takes the best defensive end in the draft. If they are really out on the idea of taking a quarterback, I think it would be a large mistake to not trade down if offered... but hey, everybody does things differently.

- The calculated risk to only move up to third overall pays off for the New York Jets as they get to pick their quarterback of choice from the non-Darnold group. For them, I could see it being either Josh Rosen or Josh Allen, but Rosen is just the more complete prospect to me between the two.

- With only Sam Bradford and Mike Glennon and no real plan past that, the Cardinals make a big move to get ahead of Denver and to take Josh Allen, while hoping to harness his arm strength into a great starting quarterback in the league. They can start Bradford in the meantime, and then Allen could open up 2019 as their starter.

- The Broncos had the chance to work with Baker Mayfield at the Senior Bowl, and it seems like just reading the different reports out there that Mayfield would be a strong candidate for the Broncos. There is no doubt that Denver needs a legitimate contingency plan behind Case Keenum.

- Some might argue that there's no way Barkley falls to 7th overall, but in the race for quarterbacks in this year's NFL Draft, I think there's a legitimate chance he slides down the board into the willing arms of the Tampa Bay Buccaneers.

- So, the Bills missed out on their quarterback. I know what you're thinking as a Bills fan, that this is a total disappointment. However, the first round is an incredible opportunity to completely change the direction of the defensive front seven from a weakness and into a potential identity for the Bills. Step one, find an evolutionary middle linebacker that can help bring you into the next wave of football and where it's headed. To me, Derwin James is a fascinating player for Sean McDermott's defense. He can line up in a lot of different spots, but really, he can be an outright weapon in the middle of the field as a next-generation linebacker in coverage and in run-stuffing ability. The middle linebacker position is so important to McDermott's defense and the athleticism and coverage ability is critical to the success of the zone-based defense. He has the speed to cover multiple positions in his spot in the zone, and also to diagnose running plays, screens and the like. He's certainly light (215 pounds) in comparison to the old established prototype of the middle linebacker goes. However, offenses are evolving, and defenses need to do the same -- and where he lacks in weight, he makes up for in height, length, and explosiveness. He's nearly 6-foot-2, has 33-inch arms, ran a sub 4.5 40-yard dash, had a 40-inch vertical, and had an 11-foot broad jump. James is a multi-faceted, three-down weapon that can be used essentially the same as a Swiss Army knife -- whatever the Bills need, he can do it.. Go ahead and read up on him for yourself... in fact, I'd recommend this piece from Adam Kramer of Bleacher Report. James and Milano would go on to be the one-two punch of the linebacker core in 2018 and what they'd hope, into the future.

After their trade down from four, it leaves the Browns with four second-round picks, and a likely opportunity to add a third first-round pick to this year's crop. By adding Sam Darnold, Calvin Ridley, and Da'Ron Payne along with all of their other acquisitions in the offseason, the Browns are quitely looking like they could contend for a Wild Card spot -- perhaps even as early as this year, as shocking as that may be to read.

- Missing out on the initial rush of the quarterbacks at the top of the first round, the Bills decline to draft Mason Rudolph -- the sixth-best quarterback from this year's draft class, and instead take on another money position front-seven defender that can help the Bills with the way the game is trending toward the future. The Bills signed Star Lotulelei to be their run-stuffing and block-eating defensive tackle, and brought back Kyle Williams to be their interior pass rusher. Williams, however, saw his game start to decline a bit last year due to age, and would likely benefit from a smaller workload. Now, that isn't to say that Williams would be replaced as the starter, but Sean McDermott believes strongly in rotational defensive linemen, and at the current moment, the Bills have nothing behind Williams as an interior pass-rushing and tackles for loss threat. That's where Maurice Hurst comes in, who is now firmly back in the first round conversation after his health issues from the NFL Combine have been cleared up. Hurst could play just a little less than half the snap, learn from Williams over the course of the year, and then potentially he could take over the full-time starting role in 2019. Interior disruption in today's NFL is such an important component to making an opposing offense less efficient, and Hurst seems like he could fit nicely into that Kawann Short in Carolina type role that McDermott's defense desperately needs. As for quarterback, rather than potentially settling for Mason Rudolph, they'll live to fight another day in the first round in 2019. This is the worst-case scenario for the Bills, but, they're able to build up their team in the meantime.

- This is pure speculation, but the Los Angeles Rams are going for it this year, and I wouldn't be shocked if they gave up their top pick to bring in Odell Beckham, Jr. and to give them a dynamic offense that teams would fear in 2018. In return for a dynamic, game-changing skill player with some off-the-field concerns, the Giants get an offensive guard to protect their 37-year old quarterback that they're trying to build around.