Joe B: Nathan Peterman gets the start, but the Buffalo Bills left the Josh Allen door wide open 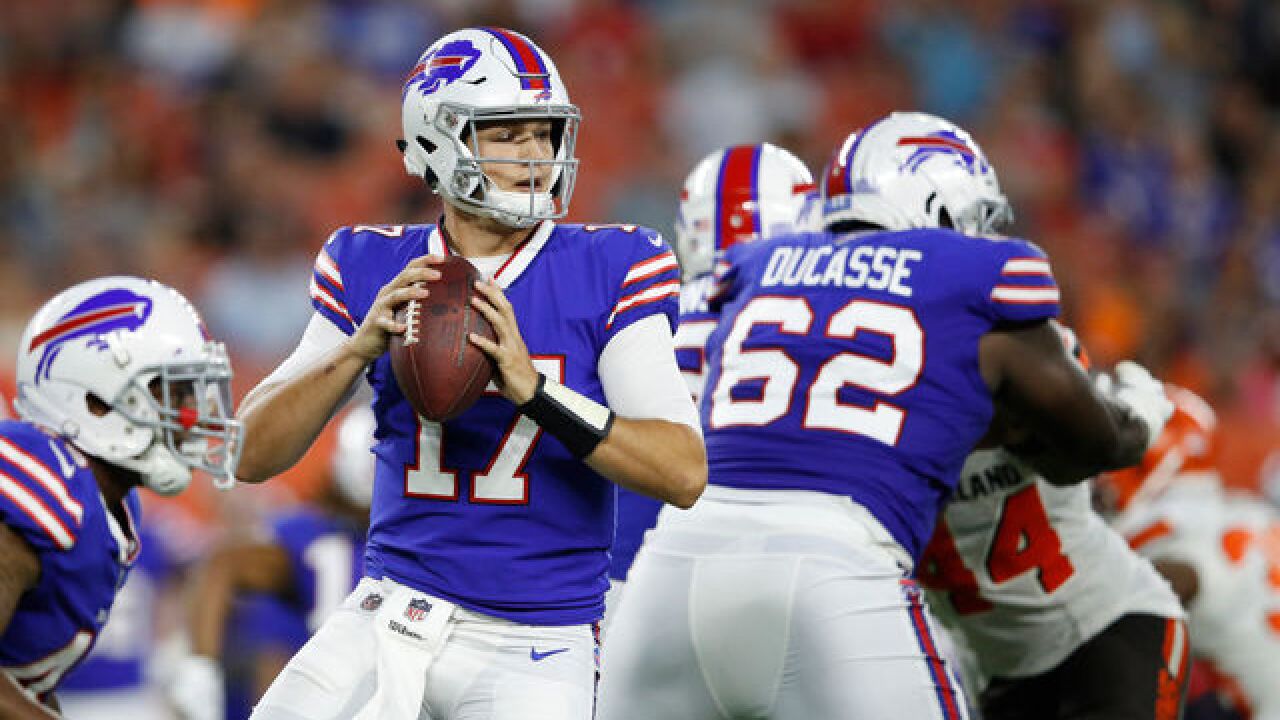 The Buffalo Bills ended nearly a six-month mystery on Monday when they declared that Nathan Peterman -- not the rookie and seventh-overall selection Josh Allen -- would be the starting quarterback heading into the 2018 season. Now that the "who is starting in Baltimore question" has been answered, no longer will there be questions about the starting quarterback.

Yeah, I regret to inform you that this is just the start of a carousel of queries. And the Bills have to be ready for it all because now the clock has officially started.

That line of thinking isn't to take anything away from Peterman, who did everything he could to earn the starting job at the beginning of the season. He was the most in control of the offense, he was the most accurate of the group, and quite frankly head coach Sean McDermott both loves him and stands up for him whenever last year's debacle in Los Angeles is brought up.

As McDermott said, Peterman "has earned the right," to be the starting quarterback to open up the campaign. The buzzword about Peterman that has popped up now is "steady," as both McDermott and general manager Brandon Beane has used it as a part of their lexicon when discussing what the second-year player brings to the table.

Steady as he goes, it appears. However, if the Bills were looking for the end of this question that felt like it was neverending at times, they are sadly mistaken.

Lucky for all of us -- well, perhaps not the Bills -- all this will do in the coming weeks now is switch the blazing hot light of the microscope on to Peterman as the lens focuses on his every performance.

But, hey, you can't blame the media and fans because the Bills unknowingly encouraged it by things both McDermott and Beane have said over the past week. All they've done, and smartly I should add, is to leave the door open to them exercising their right to starting the rookie whenever they deem it appropriate.

Let's review, shall we?

In the one-on-one interview with Beane for the 7ABC pregame show ahead of the fourth preseason game, I brought up the topic of Allen. And what Beane said as a part of his answer immediately sent alarm bells that maybe this quarterback decision was a lot closer than many of us expected after the way the preseason ended.

Beane said that Allen had done enough to warrant the opportunity to start. Now, the GM did follow up by saying that he didn't necessarily mean that Allen was going to get the start to open up the season, but the fact that the GM of the team is thinking in those terms about his rookie quarterback is significant.

Now, pair that with what McDermott said on Monday -- just hours after the Bills announced the starting quarterback for the first week of the season. And keep in mind, he did this unsolicitedly.

"Josh is on schedule," McDermott went out of his way to say. The head coach likely said this to not cast doubt on their top ten pick of a quarterback, knowing full well that the chances he gets into the starting lineup in 2018 still exist.

Don't forget that the Bills also unloaded AJ McCarron just ahead of the deadline for cuts. While the benefit on paper is an additional fifth-round draft selection in 2019, the real benefit is that all the snaps in practice that aren't going to Peterman are instead going to their rookie quarterback, which is essential to them as he continues his development.

That door I was talking about for Allen? Folks, it's wide open. Those thinking this is the start of a redshirt year for the rookie shouldn't get too ahead of themselves.

However, don't expect the Bills to yank Peterman out of the lineup after one game. After all, McDermott is usually a conservative decision maker, and he doesn't want to show his locker room that a spring and summer's worth of good work can become undone with one bad performance.

I wouldn't expect this to be an immediate thing. For instance, it took the Bills a full four weeks to bench John Miller for Vladimir Ducasse in 2017 even though Miller had been struggling mightily. Miller won the job, and the Bills felt like he had earned the right to try to turn it around.

I'd expect the same to go for Peterman through the first month of the season at least. The more he wins, the more he'll be able to hold Allen off for the time being.

However, the way that the Bills primary decision makers still talk about Allen even after Nathan Peterman had become their starter, it leaves you with that same feeling of uncertainty still. It feels like it's a matter of 'when,' not 'if.' A Paxton Lynch-Trevor Siemian Denver situation this is not.

And that's just how the Bills want it, no matter how much they back Peterman for the time being, and no matter how much they won't want to answer questions about it in the coming weeks. They can still love Peterman and believe in his future with the organization, while still maintaining one underlying fundamental principle of both Beane and McDermott.

Josh Allen is their future, and nothing is going to stand in the way of that from eventually coming true.