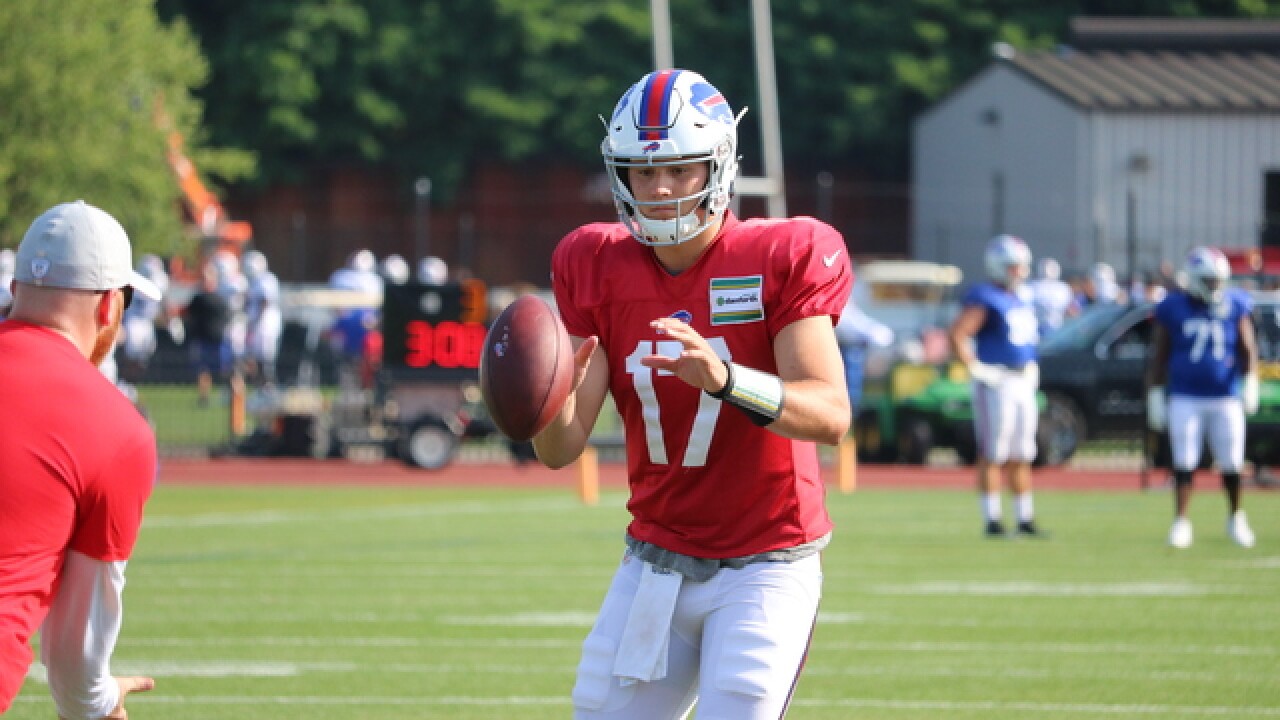 It was the perfect storm for the Buffalo Bills on Tuesday morning -- no pun intended. Ok, well, maybe now it is after I've thought about it.

Either way, the Bills had their first rain-soaked practice of the summer, they weren't in full pads, and it was the day before a preseason game which meant they wanted to be cautious anyway.

Outside of A.J. McCarron taking his normal day working with the first-team offense, and new receiver Corey Coleman working in with the third-team offense in his first day on the job, there weren't many things to observe during a practice that ran at half-speed and in the coaching staff's hope that no one got injured.

So, with the start of preseason coming up, I figured it's time to bust out a pre-preseason 53-man roster projection. With 11 days of training camp as information, there were plenty of changes from the last time I did this after minicamp in June.

Without further ado, the 53-man roster projection before all the games:

Quarterback (3)
A.J. McCarron, Nathan Peterman, Josh Allen
- The Bills will likely keep all three quarterbacks no matter how it all turns out, and it's just a matter of how they line up on the depth chart by the end of it.
Cut: None

Running Back (5)
LeSean McCoy, Chris Ivory, Travaris Cadet, Marcus Murphy, Patrick DiMarco (FB)
- About midway through camp, Marcus Murphy passed by veteran Taiwan Jones on the depth chart and hasn't looked back since. Murphy is continuously on the field and in different roles lined up all over the place, and I wouldn't be surprised if he competes to be the number-three running back if his preseason goes as well as his camp has. At first, I thought the Bills would only keep three, but Murphy has changed that with how well he's played.
Cut: Taiwan Jones, Keith Ford, Zach Olstad (FB)

Wide Receiver (6)
Kelvin Benjamin, Jeremy Kerley, Zay Jones, Andre Holmes, Corey Coleman, Ray-Ray McCloud
- The wide receiver spot is the most difficult group to project because so much can change with those preseason games. However, this came down to two players: Ray-Ray McCloud and Brandon Reilly. Reilly has outperformed McCloud all camp long and has shown some versatility at practice by lining up both outside and inside at the slot. However, they've also been working McCloud into both of those roles as well. My thinking here is that they'll give McCloud some leeway here because they drafted him and was the first of the other two receivers, and because their other wide receiver draft pick Austin Proehl has no business of making the roster at the moment. The Bills snuck Reilly on the practice squad last year, and they'll make the bet that they can do it again this year with this move. Malachi Dupre has slowly drifted down the depth chart, Robert Foster has disappointed, and Cam Phillips looks like a solid practice squad candidate. Preseason means everything to this group, especially in the fight for one or two spots.
Cut: Brandon Reilly, Malachi Dupre, Rod Streater, Robert Foster, Cam Phillips, Kaelin Clay, Austin Proehl

Tight End (4)
Charles Clay, Nick O'Leary, Logan Thomas, Jason Croom
- Just as Marcus Murphy has done at running back, Jason Croom has played his way on the 53-man roster through the first stage of training camp. He's athletic, he's finding openings during team drills, and he is showing some potential for growth after a massive jump from last year's training camp to this year. The Bills need another excellent athlete at the tight end position, and Croom brings just that. He needs to prove that he can block in the preseason games. If he does well enough, he could lock in a spot.
Cut: Khari Lee, Keith Towbridge

Offensive Tackle (4)
Dion Dawkins, Jordan Mills, Marshall Newhouse, De'Ondre Wesley
- It's been a rough week for Conor McDermott. I once had him as the top swing tackle on the team, but McDermott had a difficult time in pass protection and as a result, was bumped down to the third-team offensive line and left and right tackle. De'Ondre Wesley has essentially taken that role from him, and now it's telling that when Jordan Mills didn't practice it was Wesley that worked with the first-team offense.
Cut: Conor McDermott, Mo Porter, Gerhard de Beer

Defensive End (4)
Jerry Hughes, Trent Murphy, Eddie Yarbrough, Shaq Lawson
- With Trent Murphy missing time due to a groin injury, Shaq Lawson has gotten all the reps he can handle with the first-team unit and has done well with them -- which has helped him stay in good standing with the trade-happy Bills. That, and none of the other defensive ends have done well enough consistently to make the Bills consider dealing away a solid rotational piece for the defensive line this year. Lawson will work as the backup left defensive end and on third-down as a defensive tackle
Cut: Terrence Fede, Ryan Russell, Mike Love, Mat Boesen

Defensive Tackle (4)
Kyle Williams, Star Lotulelei, Harrison Phillips, Adolphus Washington
- John Hughes is making a push, but for the time being, I have them standing by Adolphus Washington. I think the rotation will feature a ton of Harrison Phillips as the player they look at to perform at both one-technique and three-technique. I'd expect the Bills to scale back Kyle Williams' reps a considerable amount this season, and Phillips will get a ton of time if he stays healthy. Washington might be a low defensive snap percentage guy in the season, but he sticks for roster purposes.
Cut: John Hughes, Marquavius Lewis, Rickey Hatley

Linebacker (6)
Tremaine Edmunds, Matt Milano, Lorenzo Alexander, Julian Stanford, Deon Lacey, Ramon Humber
- The linebacker group came down to keeping seven with Tanner Vallejo or keeping six with either Vallejo or Ramon Humber. The way the rest of the roster shook out I couldn't justify keeping a seventh linebacker, even if they drafted him last year, that plays the same position as a player they just signed. And that was underscored by the fact that Vallejo isn't working with the first-team special teams coverage units. If Vallejo could play weakside linebacker, I like his chances a bit more, but they need a dependable option behind Matt Milano, which is why Humber sticks.
Cut: Tanner Vallejo, Keenan Robinson, Corey Thompson, Xavier Woodson-Luster

Cornerback (5)
Tre'Davious White, Vontae Davis, Phillip Gaines, Taron Johnson, Lafayette Pitts
- Levi Wallace looks to be a great candidate for the practice squad, but he hasn't done enough in training camp to warrant a spot on the 53-man roster outright. When Phillip Gaines needs a rest, Wallace will work with the second-team defense, but he's mainly with the threes through training camp. He's the only guy of the cuts that I could see stealing a spot on the 53-man roster.
Cut: Levi Wallace, Breon Borders, Ryan Carter

Safety (4)
Micah Hyde, Jordan Poyer, Rafael Bush, Dean Marlowe
- The toughest cut of this exercise was 2018 fifth-round selection Siran Neal. He hasn't even come close to working with the second-team defense instead of being with the third unit all camp long, he isn't working with the top special teams coverage units like Dean Marlowe is, and he has yet to make an impact since arriving in late April. I think there is a chance they can sneak him on to the practice squad if he doesn't show well in preseason. To this point, he's been a bit of a disappointment.
Cut: Siran Neal, L.J. McCray, Kelcie McCray

Specialists (3)
K Stephen Hauschka, P Colton Schmidt, LS Reid Ferguson
- When Cory Carter is on, he can boom punts down the field a long way. However, the consistency of Schmidt wins out in the only real specialist contest.
Cut: K Tyler Davis, P Cory Carter