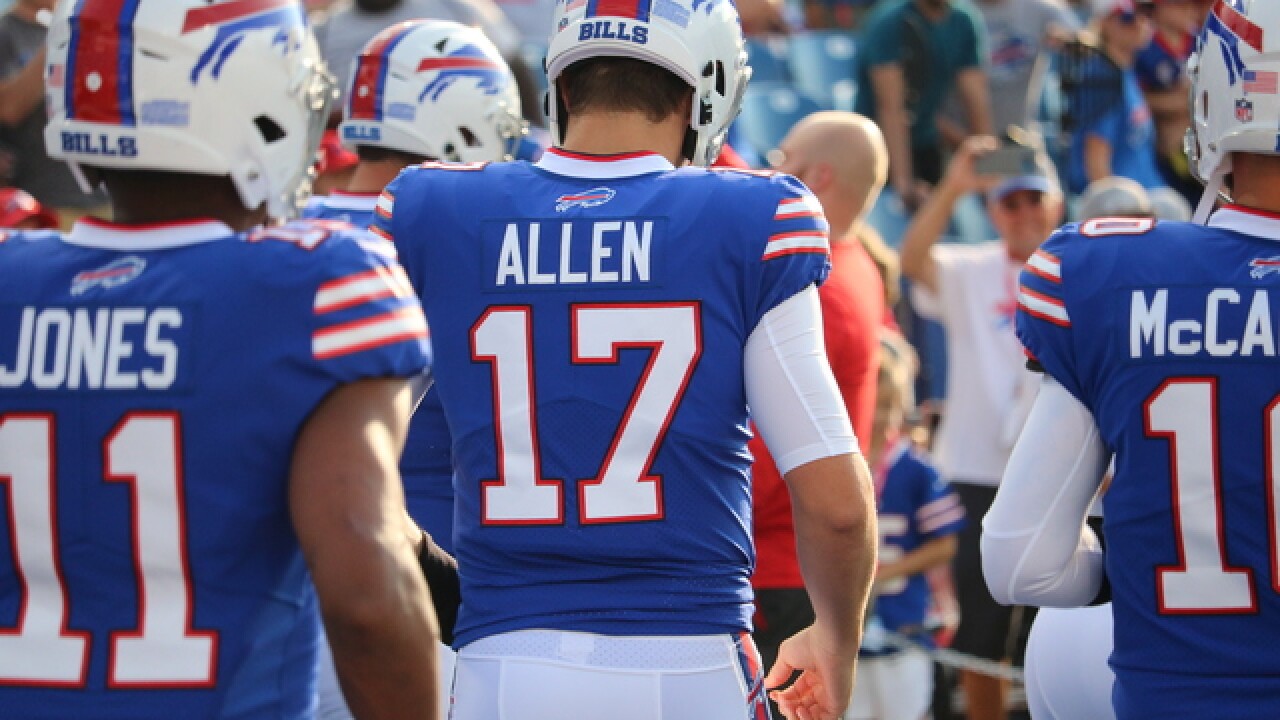 The last time I brought you a roster projection, it was just ahead of the start of the preseason, and the Bills still had much to uncover. Through two games of the preseason, we're starting to get a better picture as to who is in an excellent position to make this roster.

Still, with two games left, the final spots on the roster can be won or lost in these matchups. How are things looking in the buildup to the third preseason game of 2018?

My newest 53-man roster projection, along with all the cuts and changes from August 7th to August 22nd:

Quarterback (3)
Nathan Peterman, AJ McCarron, Josh Allen
- The only question I have for the quarterback group is in regards to AJ McCarron. Should they name Josh Allen the starting quarterback heading into the season, you can make a legitimate case to release McCarron, especially because Nathan Peterman has had a strong preseason to this point. It all depends on Allen and how quickly he develops, though.
Cut: None
Changes: None

Running Back (5)
LeSean McCoy, Chris Ivory, Marcus Murphy, Taiwan Jones, Patrick DiMarco
- Over the last two weeks, we've seen a bit of a shift in a couple of areas that led to the change at this spot. Marcus Murphy moved ahead of Travaris Cadet and is now operating as the third running back on the depth chart. Secondly, Cadet is no longer working with the first-team special teams units, while Taiwan Jones is. The only reason they would keep four players at running back is if one could be a big contributor to special teams, and it appears Jones fits into those plans quite a bit. For that reason, Cadet gets cut this time around.
Cut: Travaris Cadet, Keith Ford, Sam Rogers
Changes: Taiwan Jones in, Travaris Cadet out

Wide Receiver (6)
Kelvin Benjamin, Zay Jones, Jeremy Kerley, Corey Coleman, Andre Holmes, Ray-Ray McCloud
- Once again this decision came down to Ray-Ray McCloud versus Brandon Reilly, although Rod Streater has made a bit of a push with his play in the preseason. However, Reilly hasn't practiced a ton due to his injury and Streater isn't much of a special teams guy -- even if they are trying to get him reps with the second and third coverage units. McCloud, in his first preseason game, showed there is some game to him, and combined with his potential return ability, that's what gets him on the 53 once again.
Cut: Brandon Reilly, Kaelin Clay, Rod Streater, Malachi Dupre, Robert Foster, Cam Phillips, Austin Proehl
Changes: None

Tight End (4)
Charles Clay, Logan Thomas, Khari Lee, Jason Croom
- Another shift of the depth chart has led to another change in the projection. Nick O'Leary has been bumped down to working with the third-team offense, while both Khari Lee and Jason Croom have continued to impress. I honestly believe Lee is pushing to be the second tight end in two tight end sets in the regular season -- that's how good of a blocker he is in comparison to the rest. Croom gets in for his athletic ability and playmaking skills, though I think if the Bills had to add to another position, he might be the first to go. For now, he's on the roster.
Cut: Nick O'Leary, Keith Towbridge
Changes: Khari Lee in, Nick O'Leary out

Offensive Tackle (3)
Dion Dawkins, Jordan Mills, Marshall Newhouse
- With the way the offensive line has performed, I'm becoming less and less convinced that the current players are the ones that will ultimately make up the depth of the roster. I think the Bills should be in the market for another backup offensive tackle -- especially since Conor McDermott hasn't recovered from his mid-camp struggles. Marshall Newhouse has just been okay, and De'Ondre Wesley is intriguing but isn't enough to warrant a guaranteed spot at this point. Keep an eye on this position for the Bills with the waiver wire on the weekend teams finalize their roster.
Cut: De'Ondre Wesley, Conor McDermott, Mo Porter
Changes: De'Ondre Wesley out

Interior Offensive Line (5)
Ryan Groy, John Miller, Vlad Ducasse, Wyatt Teller, Russell Bodine
- This group seems pretty secure in their roster spots. The only change that could happen revolves around Wyatt Teller. Should Vlad Ducasse or John Miller continue to struggle on Sunday against Cincinnati, the Bills could be compelled to see what the rookie has in the final week of the preseason as a late push for a starting job. With how slow the Bills were to change out John Miller last season, I wouldn't expect that. It's food for thought down the line.
Cut: Ike Boettger, Adam Redmond, Josh James, Gerhard de Beer
Changes: None

Defensive End (4)
Jerry Hughes, Trent Murphy, Eddie Yarbrough, Shaq Lawson
- Trent Murphy's injury gives some pause as to whether they should keep four or five at the position, but the fact that he's been at least going through some work on the practice field is encouraging in itself. Unless he has a setback, we might see Murphy available to them to start the 2018 season based on his current practice status.
Cut: Terrence Fede, Ryan Russell, Mike Love, Mat Boesen
Changes: None

Defensive Tackle (4)
Kyle Williams, Star Lotulelei, Harrison Phillips, Adolphus Washington
- There was some thought to keep an additional defensive tackle due to Kyle Williams' injury, but none of the options have been remarkable enough in camp or the preseason to warrant a spot on the 53-man roster right away. Along with offensive tackle, defensive tackle is one of those spots that the Bills could look to add to on the waiver wire after all the final cuts have been made. Bear in mind that even if Williams is unavailable to start the regular season, Shaq Lawson has moonlighted at defensive tackle on third downs during multiple practices this summer, which could help bridge the gap until Williams is ready without having to use an extra roster spot here.
Cut: Rickey Hatley, Albert Havili, Tenny Palepoi, Tyrunn Walker
Changes: None

Linebacker (6)
Tremaine Edmunds, Matt Milano, Lorenzo Alexander, Ramon Humber, Julian Stanford, Deon Lacey
- Keenan Robinson has undoubtedly made a push for the roster, but even as Matt Milano has been getting his first-team time cut into, Robinson has slowly phased out from those reps. Ramon Humber seems to be the one mixing in whenever Milano is not on the field with the first-team defense. Along with Humber's importance on special teams, Robinson is a tad behind although I wouldn't rule him out completely. Stanford continues to have the edge on Vallejo as a core special teams player.
Cut: Keenan Robinson, Tanner Vallejo, Corey Thompson, Xavier Woodson-Luster
Changes: None

Cornerback (5)
Tre'Davious White, Vontae Davis, Taron Johnson, Phillip Gaines, Lafayette Pitts
- The Bills have spent the past week or so moving their backup cornerbacks around to see if there's anything there, and it made me wonder if they might even keep Levi Wallace ahead of Lafayette Pitts. However, Pitts is all over the place with the top unit on special teams. He's there on punt return, kickoff return, and kickoff coverage -- which makes him quite valuable to the Bills. If Wallace or Borders make some plays on defense, they can push Pitts for that spot, but they haven't done enough yet to warrant that spot.
Cut: Levi Wallace, Breon Borders, Ryan Carter
Changes: None

Safety (5)
Micah Hyde, Jordan Poyer, Rafael Bush, Dean Marlowe, Siran Neal
- It hasn't always been pretty for the rookie and fifth-round pick Siran Neal, but you can tell there are some explosive athleticism and playmaking traits there -- and for NFL talent evaluators, that's a tough thing to give up on immediately. If Neal makes it, I think they'll glue him to the inactive list on most gamedays -- barring injury of course. However, there is enough talent there for me to keep him as the last man in, and leave a second reserve offensive tackle like De'Ondre Wesley on the outside looking in.
Cut: Kelcie McCray, LJ McCray
Changes: Siran Neal in

Special Teams (3)
Stephen Hauschka, Jon Ryan, Reid Ferguson
- With the addition of Jon Ryan, this is the most highly-regarded competition we've seen for Schmidt. With how well Ryan has punted over his career, I'm giving him the edge at this point.
Cut: Colton Schmidt
Changes: Jon Ryan in, Colton Schmidt out