Joe B All-22 Review: Grading Bills vs. Chiefs 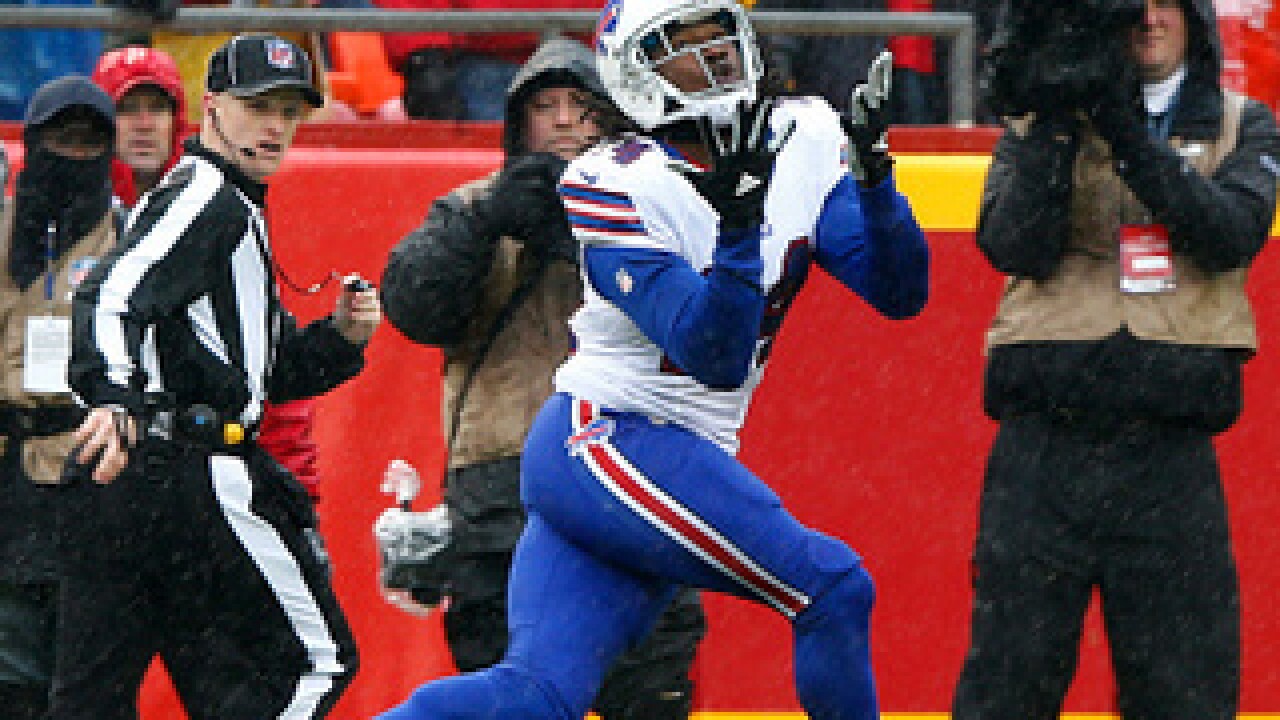 Jamie Squire
<p>KANSAS CITY, MO - NOVEMBER 29: Sammy Watkins #14 of the Buffalo Bills catches a pass at Arrowhead Stadium during the first quarter of the game against the Kansas City Chiefs on November 29, 2015 in Kansas City, Missouri. (Photo by Jamie Squire/Getty Images)</p>

Only players that take a snap on offense or defense are accounted for, and players with under ten snaps, unless they have a significant impact on the game, will not be factored into weekly rankings.
Season-long grades are tallied and documented, with each individual game’s grade being weighted for how much the player was on the field in a given week. The season-long grades are at the bottom of the column.

Now, the individual player grades of the Bills versus the Chiefs:

1) WR Sammy Watkins
Plays on the Field: 70/72
Grade vs. Chiefs: A
- Watkins’ first half against the Kansas City Chiefs was as close as we’ve seen to the young receiver being as dominant as many believe he can be. He made Sean Smith and other members of the secondary look foolish through the first thirty minutes. He drew a penalty, caught contested balls, fooled the defenders, and just wasn’t able to be contained. And then, the Bills stopped going to him in the second half. The Chiefs effectively took away the deep ball, but the Bills didn’t try to get him involved with shorter routes in the second half. Despite the team abandoning his hot start, Watkins performance in 30 minutes was worthy of him earning top honors for the week.

2) LT Cordy Glenn
Plays on the Field: 72/72
Grade vs. Chiefs: A
- For five weeks straight, Cordy Glenn has been playing fantastic football for the Bills at left tackle. He’s turned himself into a slight above average player to one of the best left tackles in the National Football League in 2015 — and he’s doing it at a great time for his wallet. Glenn will be an unrestricted free agent at the end of the season, and will likely make a pretty penny based on his level of play this year. He did a very nice job against Tamba Hali on Sunday, and was a blocking force for the run game.

3) LG Richie Incognito
Plays on the Field: 72/72
Grade vs. Chiefs: A-
- The combination of Glenn and left guard Richie Incognito has turned the left side of the offensive line from a question mark into a weapon for the Bills. Like he has done for much of the season, Incognito was given mostly one-on-one responsibilities against the Chiefs, and at times matching up with the talented nose tackle Dontari Poe. Incognito was solid in pass blocking, when he had to pull on runs, and when he just had to just run block straight ahead. He was only beaten a couple of times, leading to another lofty grade on the season.

4) HB LeSean McCoy
Plays on the Field: 62/72
Grade vs. Chiefs: B+
- His yards per carry average wasn’t amazing  (3.9), but McCoy did so much for the Bills in this game. He kept drives alive by keeping runs alive that only a player with his skill set could even dream of doing. There were multiple occasions that a play looked dead in the water because of a missed block, or an extra defender in the box, but McCoy made someone miss and got positive yardage where it did not seem possible. He also contributed to the passing attack as well, chipping in a touchdown. He did lose a fumble, which he was docked for, but he’s a dynamic runner and had to shoulder the load once Karlos Williams left with an injury.

5) DT Marcell Dareus
Plays on the Field: 58/62
Grade vs. Chiefs: B
- Playing a higher-than-normal percentage due to injuries against Kansas City, the Chiefs did well to limit Dareus’ overall impact on the game. It wasn’t the strongest performance for him, because they mostly assigned two blockers to him and got the ball out quickly, or they just didn’t run at Dareus. On the few occasions that Dareus did not face a double team, he was able to shed his defender and make a play against the run. It wasn’t his best game of the year, but he was still very effective.

6) QB Tyrod Taylor
Plays on the Field: 72/72
Grade vs. Chiefs: B
- Like Watkins, Taylor’s grade is heightened by his first half. However, unlike Watkins, Taylor is docked for his second half because he was directly in control of helping the passing game not be pushed aside like it was. In the final 30 minutes, Taylor threw for only 55 yards, as opposed to the 236 he gained in the first half. He was missing throws, receivers were dropping passes, and the Bills could never get it going in the second half. The first half, though, was a special one for Taylor. With the exception of one misfire, Taylor was throwing with confidence and putting trust in Sammy Watkins to make a play against double coverage. He threw a few passes that had pinpoint accuracy, and they couldn’t have been thrown any better.

7) TE Charles Clay
Plays on the Field: 61/72
Grade vs. Chiefs: B
- Clay has basically disappeared over the last five weeks from the passing attack. The tight end has only 15 receptions for 129 yards over his last five games combined, which is concerning, considering how much the Bills paid for him in the offseason. Clay, however, stood out in both run blocking, and in making people miss on one of his five receptions against Kansas City. His blocking has been a work in progress most of the year, but he did well for himself against the Chiefs.

8) S Corey Graham
Plays on the Field: 61/62
Grade vs. Chiefs: B
- For the second straight week, safety Corey Graham turned in a high quality performance that helped a Bills safety group that has been yearning for consistency from one of their players. Graham read plays well and put himself in position for an interception if Alex Smith would have properly thrown a pass to his wide receiver. Graham also chipped in on run support. Overall, it was a good day for him.

9) G Kraig Urbik
Plays on the Field: 72/72
Grade vs. Chiefs: B
- Filling in for the injured John Miller once again, Kraig Urbik had a lot of the pressure of one-on-one matchups taken off him, but Urbik still performed admirably in run blocking against the Chiefs. While he didn’t stand out for bone-crushing blocks, but, he played solid, mistake-free football — which is all the Bills were asking for. Urbik has played only 79 snaps less than Miller, and has been the far better player. When Miller comes back from a high ankle sprain, Urbik at the very least has earned some consideration for the job.

10) TE Matthew Mulligan
Plays on the Field: 25/72
Grade vs. Chiefs: B
- One of the staples of the Bills offense is a stretch-run to the left side of the offensive line, where the Bills also line up Charles Clay and Matthew Mulligan next to left tackle Cordy Glenn. On those plays, and another one on the right side, Mulligan controlled his assignments all game long for the Bills. He helped spring a couple of huge runs, and without him, the Bills would be sorely lacking in not having an essential sixth offensive lineman whenever he is on the field.

28) WR Robert Woods
Plays on the Field: 69/72
Grade vs. Chiefs: C+
- For a player that gets as visibly frustrated as he does when he’s open and doesn’t get the pass thrown to him, or when the ball is thrown to him and it’s out of reach, Robert Woods didn’t do himself many favors in the second half. Rex Ryan made mention on Monday that they need to avoid drops all game long, and Woods was the biggest offender down the stretch.

29) CB Ronald Darby
Plays on the Field: 54/62
Grade vs. Chiefs: C
- Darby started off the game strongly, but after he came back from getting checked on for a concussion, he wasn’t the same, reactionary  and quick cornerback we’ve grown accustomed to. Darby was beat deep by Jeremy Maclin for a touchdown, and also was the closest man to Travis Kelce on the tight end’s touchdown catch. He has seen many better days than the one at Arrowhead Stadium.

30) LB A.J. Tarpley
Plays on the Field: 26/62
Grade vs. Chiefs: C
- Coming into the game, undrafted free agent linebacker A.J. Tarpley played exactly 14 snaps of defense all season long. Tarpley more than doubled that total against the Chiefs, and was found to be a liability almost immediately. The Chiefs ran it right at Tarpley, challenging him to get off blocks and to make a play, but he never did that. Tarpley has since been released by the Bills.

Players with below 10 snaps (that were inconsequential to the game)