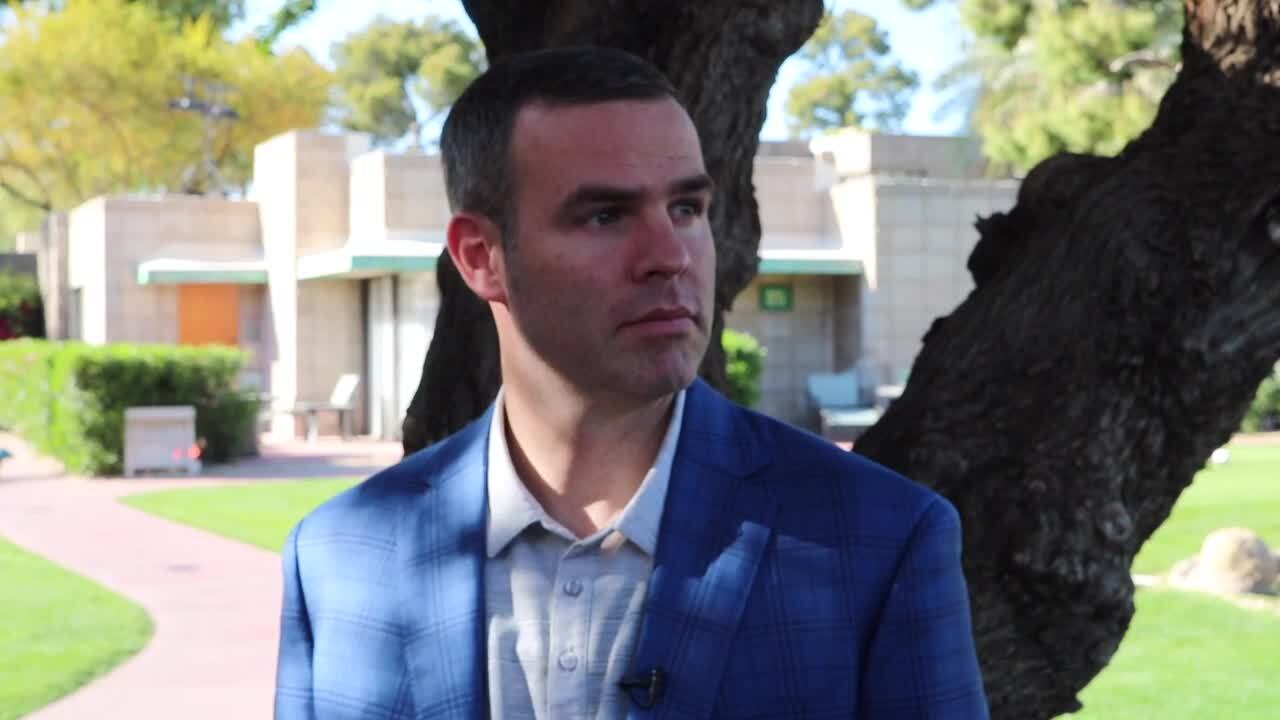 (WKBW) — The Buffalo Bills are preparing to enter the next phase of their offseason. On Tuesday, the veterans will (voluntarily) join the rookies on the team for their first on-field practice of the 2019 campaign.

It gives us our first look at how the roster that general manager Brandon Beane and head coach Sean McDermott assembled will be put together, with a lot of different moving parts as they begin to figure out who will play a prominent role in the coming season. It's also a time to be cautious of believing a bit too much into what you see on the field.

In the interest of self-scouting, last year's way-too-early projection had 48 hits out of the 52 that the Bills initially kept on the roster in early September. I overlooked Marcus Murphy, Robert Foster, Jason Croom and Deon Lacey for Austin Proehl, Nick O'Leary, Tanner Vallejo and Breon Borders.

While regrettable, there's only so much you can do without watching a single practice to that point. So, let's do it again!

Quarterback (2)
Josh Allen, Matt Barkley
- For the third straight year, I have the Bills beginning their season with only two quarterbacks on the active roster. While the Bills would certainly keep three if the third player provided more value than one of their other back-end roster players, but I could not justify keeping Tyree Jackson on this projection to cut either a player the team drafted or a veteran player that could factor in on special teams. Jackson would be attached to the inactive list all year long, so if he doesn't show strong signs of development, this roster is now in a place where it has talent and depth, and they can't keep youth if there is a low amount of functionality to the team in that season. Jackson is a talented but raw prospect that needs developing, which sounds like a prime candidate for the practice squad.
Cut: Tyree Jackson

Running Back (5)
LeSean McCoy, Frank Gore, Devin Singletary, Sinorise Perry, Patrick DiMarco
- The final spot for this group came down to TJ Yeldon against Sinorise Perry. If Devin Singletary shows enough in training camp, I could see the Bills opting to keep Perry on for special teams purposes while releasing Yeldon. The Bills are only committed to $500,000 on the salary cap for Yeldon this season, so they could easily release him without it costing them a ton. Perry is a renowned special teams player and could become a piece of coordinator Heath Farwell's core. Don't forget; the Bills signed Yeldon just before the 2019 NFL Draft -- and ahead of the team knowing if they'd be able to bring in a running back of consequence. The Bills kept Taiwan Jones as their fourth running back last year for special teams reasons, and Perry could fit the mold this year. Simply put, Singletary makes Yeldon expendable. Yeldon will have to earn his way on the roster.
Cut: TJ Yeldon, Marcus Murphy, Christian Wade

Wide Receiver (5)
John Brown, Zay Jones, Cole Beasley, Robert Foster, Andre Roberts
- Seeing only five receivers make the roster might be somewhat of a disappointment to you, but unless someone truly stands out during training camp or the preseason, I have a hard time making a case for one of the players that are cut over someone that is on the right side of the roster bubble. The presence of Andre Roberts as a return specialist and with the flexibility to play in the slot has made both Isaiah McKenzie and Victor Bolden expendable. And the rest of the group has some potential, but not a single one of them has proven anything in Buffalo just yet. I think Williams, Sills V, Phillips and Easley all make for compelling practice squad candidates. As it stands now, I think the Bills would rather have four tight ends as opposed to six wide receivers, though we'll see how the summer unfolds.
Cut: Isaiah McKenzie, Victor Bolden, Jr., Duke Williams, David Sills V, Ray-Ray McCloud, Cam Phillips, Da'Mari Scott, Nick Easley

Tight End (4)
Tyler Kroft, Lee Smith, Dawson Knox, Tommy Sweeney
- The top three of Tyler Kroft, Lee Smith and Dawson Knox are all set in stone to make the roster. The real battle will be between seventh-round pick Tommy Sweeney and 2018 spot-starter Jason Croom. There are three reasons I went with Sweeney over Croom. First, Brandon Beane needs to see little to nothing from his most recent draft picks in the summer to not include them on the 53-man roster. Siran Neal and Ray-Ray McCloud did not perform well last summer, but still made the team. The only draft pick that the Bills released was Austin Proehl. Second, the Bills already have two tight ends on the roster that specialize in receiving in Kroft and Knox, with only one that specializes in blocking in Smith. If Smith were to go down with an injury, the Bills would lose a sizeable role from their offense. Sweeney's blocking ability is what wound up getting him drafted, and ultimately could be what helps him to stick on the roster. Third, Croom has not shown enough as an athlete or a receiver in extended regular season opportunities to warrant a spot on the 53-man roster. Croom showed some ability but also lost two fumbles in only 22 receptions for the team. He has to prove himself as a solid special teams player and a better blocker than he was last year, otherwise, Sweeney has the leg up heading into camp.
Cut: Jason Croom, Moral Stephens

Offensive Tackle (4)
Dion Dawkins, Ty Nsekhe, Cody Ford, LaAdrian Waddle
- The group of four is pretty cut and dry. A pair of young players and a couple of veterans. The only questions are about which two will start, and if either Dawkins or Ford will move inside to guard.
Cut: Conor McDermott, Blake Hance, Garrett McGhin

Interior Offensive Line (5)
Mitch Morse, Spencer Long, Quinton Spain, Jon Feliciano, Wyatt Teller
- With the Bills going on a signing spree of interior offensive linemen in free agency, the presence of two, in particular, make Russell Bodine expendable. The first and most obvious is Mitch Morse, who will be the starting center in 2019 and beyond and takes over the job from Bodine. The second player is Spencer Long, who has the flexibility to play all along the interior offensive line. So, if Morse were to get hit with an injury, Long -- even if he wins a starting guard position -- would slide inside to center and one of the other free agent signings would conceivably come in as a spot starter. Bodine is coming off an injury, he did not play well last season and he doesn't offer positional flexibility. The combination of those three things ultimately keep Bodine on the cut line for me at the moment.
Cut: Russell Bodine, Ike Boettger, Vladimir Ducasse, Jeremiah Sirles

Defensive End (4)
Jerry Hughes, Trent Murphy, Shaq Lawson, Eli Harold
- The biggest battle for a roster spot at defensive end will be between Eli Harold and Eddie Yarbrough. Despite Yarbrough making the team each of the last two seasons, he needs a huge summer -- much like the one he had in 2017 -- to make sure he hangs on to a roster spot for a third straight season. However, things are working against Yarbrough, or at least how they were trending last season. Yarbrough doesn't get much pressure on the pocket, so when the second unit of the defensive line comes in, teams know they can neutralize him with only one blocker and dedicate resources elsewhere. The drop-off in pass rushing between Hughes and Yarbrough at right defensive end was steep. Additionally, the Bills found out that they can't use Yarbrough on special teams -- which is almost a prerequisite for most backup players on the team. Yarbrough started the season not getting any special teams time, they then started to work him in, and then took away his responsibilities as the year dwindled. Eventually, the Bills made Yarbrough inactive in favor of undrafted rookie Mike Love. If Harold, or even seventh-round rookie Darryl Johnson, shows more of an ability to get to the passer from the right side than Yarbrough, or that they can be used on special teams, that likely gives them a leg up. Despite being drafted, Johnson seems like a fairly raw prospect that might be better suited for the practice squad than the more game-ready and fellow seventh-round pick and tight end Tommy Sweeney.
Cut: Eddie Yarbrough, Darryl Johnson, Mike Love

Defensive Tackle (4)
Star Lotulelei, Ed Oliver, Jordan Phillips, Harrison Phillips
- Defensive tackle is an open and shut case. The Bills invested in all four of the players they signed either with a substantial contract, or with a draft pick, and I don't see them walking away from any of them for the backups listed below.
Cut: Kyle Peko, Robert Thomas, Quindarius Thagard

Linebacker (6)
Tremaine Edmunds, Matt Milano, Lorenzo Alexander, Vosean Joseph, Julian Stanford, Deon Lacey
- This group also seems reasonably easy to predict. The Bills have their starters in Tremaine Edmunds, Matt Milano and Lorenzo Alexander. They have a rookie they want to develop in Vosean Joseph. And they have two core special teams players in Deon Lacey and Julian Stanford. Maurice Alexander might make it interesting for a roster spot, though I don't know where he fits into the Bills defense just yet. That's something he'll need to show as the summer goes to warrant a spot on the team over one of the top six, or over an extra at one of the other positions.
Cut: Maurice Alexander, Corey Thompson, Tyrel Dodson, Juwan Foggie

Cornerback (6)
Tre'Davious White, Levi Wallace, Taron Johnson, EJ Gaines, Kevin Johnson, Lafayette Pitts
- In this group of six, the Bills have defined starters (Tre'Davious White and Taron Johnson), veteran experience (EJ Gaines and Kevin Johnson), a young player to develop (Levi Wallace), players that have the flexibility to play at nickel (Gaines and Johnson), and a special teams asset (Lafayette Pitts). Ryan Lewis will have to beat either Gaines or Johnson for a roster spot, though it will be tough considering the Bills tried Lewis at nickel when he first arrived in Buffalo and ultimately moved him back outside -- which could sink his argument for being versatile enough to play inside and outside like the other two.
Cut: Ryan Lewis, Denzel Rice, Cam Lewis

Safety (5)
Micah Hyde, Jordan Poyer, Rafael Bush, Siran Neal, Jaquan Johnson
- After Micah Hyde and Jordan Poyer, how the safety roster comes out is up in the air. Rafael Bush is the veteran backup that can play big nickel, but his safety on the team isn't guaranteed -- especially because the Bills have two drafted safeties on the roster now along with him. If Siran Neal or Jaquan Johnson can show that they have come along enough through the summer, and even show some ability in reps as the big nickel, it could mean the Bills release Bush. Though, this is also a team that hasn't been shy about keeping five safeties on the roster. Four is the preferred number, but I don't know if the Bills would want to give up on either Neal or Johnson that quickly (unless one of them doesn't show anything). For now, I have them sticking with five with Bush on the right side of the bubble because of his experience.
Cut: Dean Marlowe, Abraham Wallace

Special Teams (3)
Stephen Hauschka (K), Corey Bojorquez (P), Reid Ferguson (LS)
- The Corey vs. Cory punt extravaganza begins on Tuesday, and I, for one, cannot wait. Bojorquez gets the edge because he appears to have the bigger and more consistent leg. Though, this is a toss-up that will be decided by who plays consistently well enough in the preseason.
Cut: Chase McLaughlin (K), Cory Carter (P)