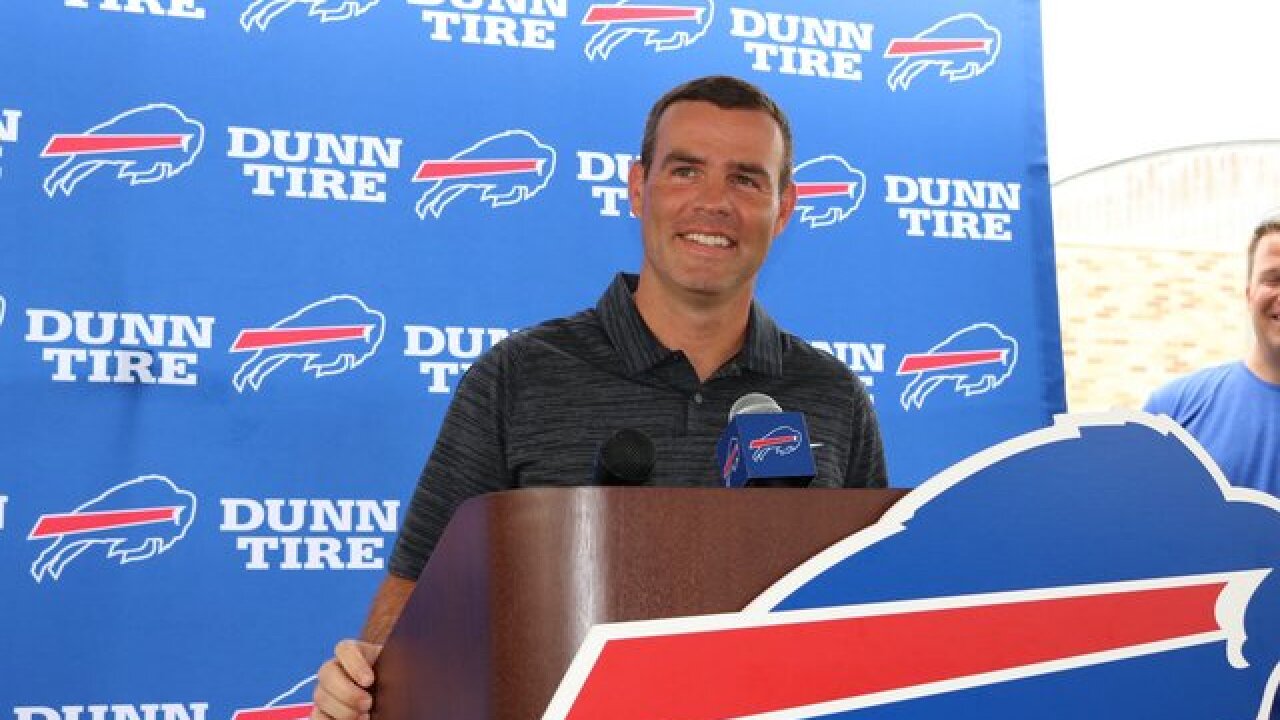 The spring workouts have come and gone for the Buffalo Bills, which means we're now just a little over one month away from the 2018 NFL season becoming a reality.  It was a fast track once the draft finished up, and now the team has a full four weeks of work together behind them.

In those practices, we learned quite a bit about this version of the Bills. We got a pretty good glimpse into their thinking in a lot of different positions, and it even shed some light on what might happen at training camp.

We must always observe the cardinal rule of spring practices. Never get too high, or too low on a player after those practices because there is a 'fool's gold' factor to all of it. Many players shine in the spring and fade in the summer once the pads go on and the competition becomes more physical.

However, after the spring workouts, it opens up eyes to the idea of some players that were initially afterthoughts to potentially fighting for a roster spot.

And in the spirit of all of it, it's time for my annual 'a tad too early' 53-man roster projection. Here we go:

Quarterback (3)
Nathan Peterman, A.J. McCarron, Josh Allen
- All three stick for now, because nothing has been determined in this starting competition just yet. Nathan Peterman was the strongest quarterback of the spring, but Josh Allen will likely figure into the competition before the summer is complete. If it's either Peterman or Allen that wins the job, that puts A.J. McCarron in an interesting spot. If he performs well enough, he'll secure a spot on the roster. However, if he struggles during training camp and preseason, there is a legitimate case to be made for the Bills to go into the season with only two quarterbacks -- and with all their focus on developing a long-term one-two punch. It wouldn't cost the Bills a ton to do away with McCarron. However, it's far too early for any of that, and we'll have to see if Peterman continues his strong play if McCarron continues to struggle, and if Allen continues his uphill climb toward more first-team reps.
Cuts: None

Running Back (4)
LeSean McCoy, Chris Ivory, Travaris Cadet, Patrick DiMarco
- Running back will ultimately come down to the Bills and the rest of their roster. Conceivably they could keep the trio above and then a fourth like Taiwan Jones or Marcus Murphy. However, at this point, I can't make a strong enough case for either one of them, and they'd have to do some damage on special teams this summer.
Cuts: Taiwan Jones, Marcus Murphy, Keith Ford, Zach Olstad

Wide Receiver (7)
Kelvin Benjamin, Zay Jones, Jeremy Kerley, Andre Holmes, Malachi Dupre, Ray-Ray McCloud, Austin Proehl
- Keeping seven receivers was tough to do while there were plenty of other positions that could have garnered another spot. However, I think the Bills want to be as committed as possible to the players they drafted making the team for at least one season. After the spring practices, sixth round selection Ray-Ray McCloud looks like he'll figure into the punt return competition quite significantly. If he wins, that locks in his spot on the roster. Austin Proehl made a lot of big plays throughout the spring and showed a good rapport with rookie Josh Allen, which is the reason why I've got him sticking around. I don't know if they'd feel comfortable in risking losing him on the waiver wire. The other bubble name that made it here was Malachi Dupre because he earned his way into a lot of first-team reps during the spring practices -- that is before a hamstring injury caused him miss the rest of the sessions. Those three players will receive some intense competition from some other roster-worthy players.
Cuts: Robert Foster, Brandon Reilly, Quan Bray, Rod Streater, Kaelin Clay, Cam Phillips

Tight End (3)
Charles Clay, Nick O'Leary, Keith Towbridge
- The top two are locked in, but the third spot is up for grabs in my view. Logan Thomas was the third tight end last year but failed to take advantage of significant opportunities when injuries came around. The Bills also kept Khari Lee in the previous year mostly as a run blocker. Throughout the spring, Keith Towbridge was one of those names that you just kept writing down because he made play after play. He's a bigger tight end, and we'll have to see if he can stand up as a blocker during camp, but he showed an excellent ability for getting open and completing the play through OTAs and minicamp. They could have easily given Towbridge an injury settlement last year after landing on Injured Reserve, so that speaks volumes about how they viewed him last year during training camp.
Cuts: Logan Thomas, Khari Lee, Jason Croom

Offensive Tackle (4)
Dion Dawkins, Jordan Mills, Marshall Newhouse, Conor McDermott
- The Bills seemed pretty set with Dion Dawkins and Jordan Mills as their starters for 2018. When Mills sat out the final practice, Marshall Newhouse was the first man in and took his first-team reps which shows his importance to the roster. The Bills remain high on Conor McDermott, who is usually the last person on the field after every practice, and they'll hope he develops into a potential replacement for Jordan Mills as the right tackle's contract expires after this year.
Cuts: Mo Porter, Gerhard de Beer

Interior Offensive Line (5)
Vladimir Ducasse, Ryan Groy, John Miller, Russell Bodine, Wyatt Teller
- The main four here are Ducasse, Groy, Miller, and Bodine.  At this point, Ducasse and Miller look locked in as the starters at left and right guard, while Groy and Bodine continue to duke it out to be the starting center. Wyatt Teller will stick around because he's a draft pick with some potential, and there's even the chance that he pushes either Ducasse or Miller for a starting spot at some point this year. Keep an eye on De'Ondre Wesley as a sleeper for the roster. Wesley has practiced at four of the five offensive line spots during spring workouts. He misses the cut this time around, but he'll be a contender for a spot.
Cuts: De'Ondre Wesley, Ike Boettger, Josh James, Adam Redmond

Defensive End (4)
Jerry Hughes, Trent Murphy, Eddie Yarbrough, Shaq Lawson
- This group is fairly established. The only spot that remains in question is Shaq Lawson and whether he'll continue his motivated spring and turn it into summer at training camp and during the preseason. He's a backup now, and if he gets outperformed by either Owa Odighizuwa or Terrence Fede, the Bills could look to trade him during the summer. And he would be another name that they've dealt like so many other Doug Whaley draft picks.
Cuts: Owa Odighizuwa, Terrence Fede, Mike Love, Matt Boesen

Defensive Tackle (4)
Kyle Williams, Star Lotulelei, Harrison Phillips, Adolphus Washington
- Defensive tackle looks to be the position with the least wiggle room on the whole roster. Adolphus Washington might be the only one that has a chance not to be included, but there hasn't been a strong enough combatant to warrant that consideration just yet.
Cuts: Rickey Hatley, Marquavius Lewis, Tenny Palepoi

Linebacker (6)
Tremaine Edmunds, Matt Milano, Lorenzo Alexander, Ramon Humber, Tanner Vallejo, Julian Stanford
- Deon Lacey might have been the only other name to consider at this point because of his ability on special teams, but it appears that might be washed out by the presence of Julian Stanford -- a player they signed in free agency for the same reason. With this group, the Bills would have three of the six linebackers having practiced at middle linebacker at one point in the buildup to the season -- a luxury they lacked last season, and they got a bit lucky that Preston Brown was never injured.
Cuts: Deon Lacey, Corey Thompson, Xavier Woodson-Luster

Cornerback (6)
Tre'Davious White, Vontae Davis, Taron Johnson, Phillip Gaines, Lafayette Pitts, Levi Wallace
- There's only one change from the last roster projection on May 14, and that was to replace Breon Borders with Levi Wallace. Wallace passed Borders on the depth chart during the spring and has the exact type of length and playing style that the Bills look for in their cornerbacks. Borders still has a chance because he did have a strong summer in Oakland last year, but Wallace took a significant step forward this spring.
Cuts: Breon Borders, Ryan Carter

Safety (4)
Micah Hyde, Jordan Poyer, Rafael Bush, Siran Neal
- After what I saw in the spring, I think there is a bit of a window here for a fifth safety to be kept on, and I was quite close to putting Dean Marlowe with the other four that seems like a pretty solid bet to make the team. Marlowe rose up the depth chart during the spring and has a bigger body that the Bills could look for to take up that 'big nickel' role that Sean McDermott likes to have in his back pocket. It depends on Marlowe's performance during the summer, but also on Siran Neal. If they feel he isn't ready for those types of responsibilities just yet, they could keep Marlowe and develop Neal behind the scenes as an inactive on gameday player. For now, no Marlowe.
Cuts: Dean Marlow, L.J. McCray, Kelcie McCray