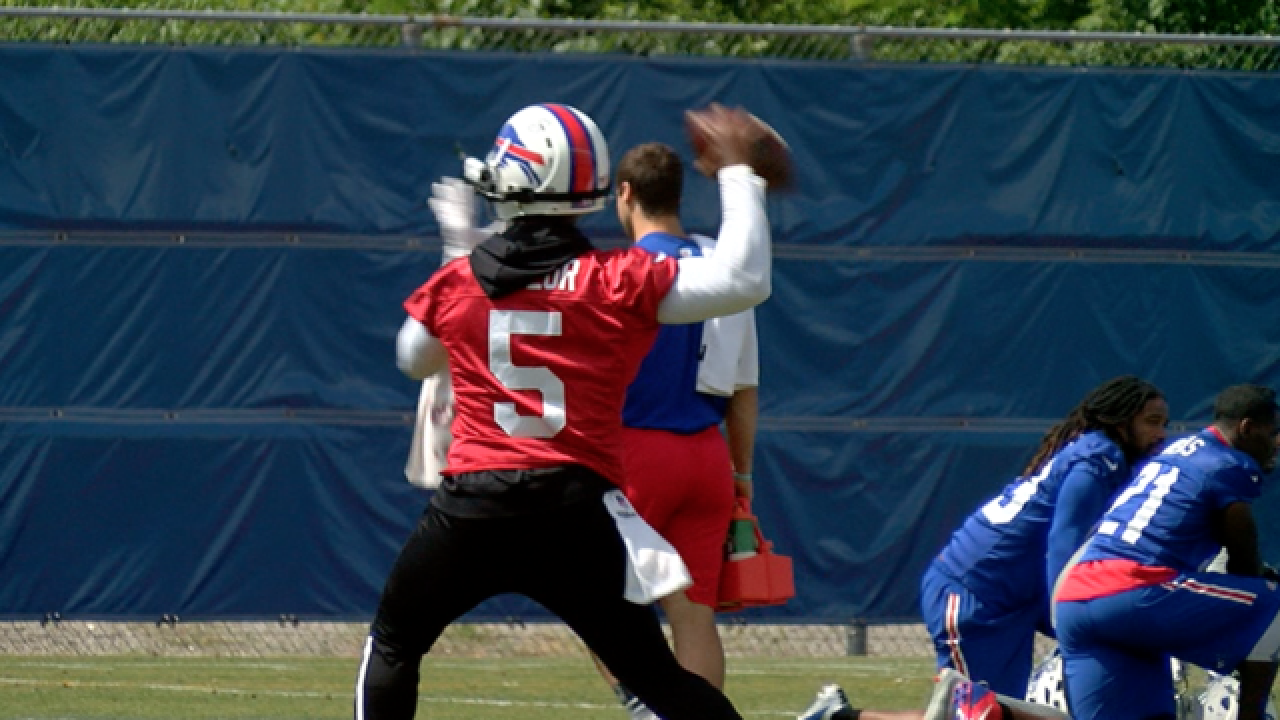 The Buffalo Bills entered into the final phase of the offseason before it all starts up for real in July. All the players on the roster descended onto Orchard Park and the Bills started the first day of mandatory minicamp.

As the title indicates, it’s the first time in 2016 that all players were required to be at team facilities, or else they were subject to a fine. It’s the first of three days that the players were going through the paces on the field, and there were a few takeaways from the event.

My seven observations from the day of work:

1) Tyrod steals the show
- I’ll preface this by saying that it’s only mid-June, and there is a long way to go for practices that matter in the grand scheme of things. However, starting quarterback Tyrod Taylor has done everything right over the past three weeks of work, and Tuesday was his most impressive day of the bunch. After a couple of errant passes early in the practice, Taylor was on fire with his accuracy — and not just with your standard throws to wide open targets. He was the most impressive player on Tuesday because he fed the ball into the hands of his receivers with a very small window, and he did so numerous times. During the offseason workouts, Taylor has done a couple of things that he didn’t really show during the season last year: throwing the ball over the middle of the field, and making tight window throws (except if it were to Sammy Watkins). Again, it’s way early, but the Bills have to be incredibly optimistic about Taylor’s potential progress as they get closer to training camp.

2) Cardale looks hesitant
- On the flip side, the quarterbacks below Taylor on the depth chart haven’t been anywhere near the same level as the starter. Backup EJ Manuel continued to have problems hitting deep targets in stride, either overthrowing it by quite a bit, or under throwing it to the point where the receiver had to slow down — which then allowed the defensive back to get back into the play. This is only the third week of on-field work for rookie Cardale Jones with the rest of the team, and it shows. Jones, the Bills project quarterback, just appears to be thinking too much out on the field. He isn’t trusting what he’s seeing just yet, and is hesitant to make a decision during team drills and 7-on-7s. The game still has to slow down for him, and for a player that is essentially being broken down and completely reworked, it would be tough to expect him to adapt so quickly. It’s going to be a slow process, but one the Bills have committed themselves to.

3) McCoy does a little more, but still limited
- For the second straight week, the Buffalo Bills were without top running back LeSean McCoy during all of the team drills at practice. McCoy, who the Bills at first said was dealing with a tight hamstring, is actually being bothered by an ankle injury. Like last week McCoy did take part in individual drills, but it seemed like he was exploding through the drills quicker than he was last week. The Bills are just taking any precaution possible with McCoy because they need him in September, and in the grand scheme of things, the three-day minicamp in June won’t mean much to his upcoming season — unless of course he suffers an injury. Expect McCoy to have limited work over the next two days, as well.

4) Tuesday’s standout WR: Leonard Hankerson
- The Bills have been pretty good with rotating all of their wide receivers in with the first-team offense through OTAs, and on Tuesday, former Washington, Atlanta, and New England player Leonard Hankerson got an extended shot with Tyrod Taylor. The veteran wideout took advantage of the opportunity by making an incredibly difficult catch. It was a deep ball down the right sideline, and with the defender basically on his hip pocket, Taylor put the ball in the perfect spot for Hankerson. That perfect spot, entailed Hankerson tilting his head straight up to locate the ball, and then flipping his hands out to the right side of his body to secure the ball with fully extended arms. Even more impressive, the defensive back in coverage was Ronald Darby. True, it’s only one play, but it goes a long way in helping the quarterback to trust him as a viable target in clutch times.

5) Cross-training the defensive line?
- As the Bills have continued through the past few weeks of practices, they’ve done quite a bit of cross-training of their defensive linemen — and it was especially evident during the team’s first day of mandatory minicamp. The Bills seem to be using quite a few players at nose tackle throughout the workouts in an effort to be a more versatile unit. Marcell Dareus, Corbin Bryant, Jerel Worthy, and Justin Zimmer all saw time at nose tackle, in addition to lining up at defensive end on some downs as well. The recently re-converted defensive player T.J. Barnes also lined up at nose tackle, but that seems to be his only position in this defense at this point. Of that previous group, Bryant — who doesn’t have the typical frame to be a nose tackle (6-foot-4, 300-pounds), has lined up quite a bit at nose tackle over the past few weeks.

6) Easley improving, Listenbee takes step forward
- As the wide receivers on the roster continue to jockey for positioning on the depth chart for training camp this summer, two others are doing what they can to get back on the field in a full capacity. Marcus Easley, who has been an asset on coverage units for the Bills on special teams, was doing a bit more with the training staff on Tuesday. He worked on the far end of the field to rehab his knee injury in a series of strengthening exercises. It appeared as though that he’s progressing quite nicely. The rookie Kolby Listenbee also appeared to take a step forward in his progress from his offseason double sports hernia surgery. Listenbee was getting reps during routes versus air, more than he’d done during OTAs — at least while the media was watching. He hasn’t graduated to team drills just yet, but it’s likely not that far off for the sixth-round pick.

7) Henderson spotted
- The Bills haven’t made a lot of comments about the status of Seantrel Henderson, other than that they hope he can make a full recovery. The former starting right tackle was spotted on the exercise bike during the beginning stages of Tuesday’s practice, but he also appeared to be quite thin as to what he was while he played over the last two seasons. Henderson is reportedly battling Crohn’s Disease, and according to the team, is doing everything in his power to make a full comeback and get back on the field. One of those things that he’ll need to do, at least for how he looked on Tuesday, will be to get back into football shape.