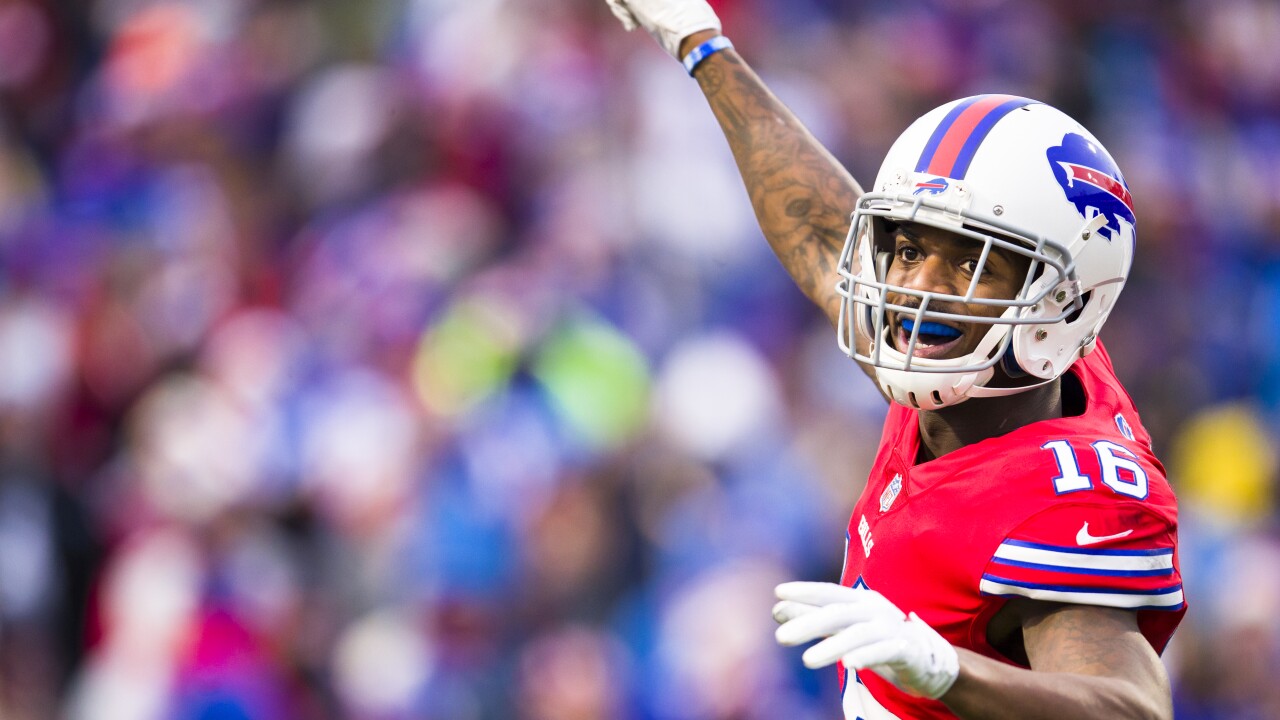 ORCHARD PARK, NY (WKBW) — For the first time in 2019, the Buffalo Bills were back on the field this week for the first set of Organized Team Activities. It also means that it was the first time how all the moves of the offseason would start to form together.

It is, however, essential to note that where players line up on the depth chart during OTAs does not tie them to that role as they work through the rest of the spring and summer. As head coach Sean McDermott ahead of Tuesday's practice, "There is no depth chart this time of year." Everything is fluid during the spring workouts.

However, where players are lining up and the chances they get are notable as things open up -- which leads to a lot of new information about the team.

With that, seven observations from the first week of OTAs:

1) The answer to the initial offensive line puzzle
- To say that the Buffalo Bills overhauled their roster along the offensive line would be a bit of an understatement. When the Bills lined up for the first rep of team drills, 80-percent of the offensive line with the first team is different from what it was at any point last season. The lone holdover is Dion Dawkins, the former second-round pick who is facing a make-or-break third season with the Bills, and he resumed his place with the first-team offense at left tackle. Without free agent acquisition Ty Nsekhe getting any time at left tackle on Tuesday, it's an initial indication that Dawkins will get every chance to earn his starting spot at left tackle. The Bills invested in him with a substantial draft resource, and they need to find out if he can be the long-term answer there. If we begin to see either Nsekhe working at left tackle with the first unit, or Dawkins working inside with any unit, then perhaps the Bills will have started to question what would be best with Dawkins. They hope an offseason of uncertainty was enough for a wakeup call for the young left tackle. Along the rest of the offensive line with the first team, it featured Spencer Long at left guard, Jon Feliciano at center, Quinton Spain at right guard, and Nsekhe at right tackle. It was mildly surprising to see Spain at right guard, given all of his experience in Tennessee was at left guard. The notion of Feliciano taking reps at center was also slightly unexpected, and even though he was doing so because both Mitch Morse and Russell Bodine were not practicing due to injury, that flexibility could have final roster ramifications. Rookie Cody Ford lined up exclusively with the second unit at right tackle, though I wouldn't read too much into that just yet. Both Ford and first-round defensive tackle Ed Oliver lined up with the second unit, but the expectation is that both of those players will be in the starting lineup before too long. Under Sean McDermott, this is a similar track for many rookies, except for only cornerback Tre'Davious White and middle linebacker Tremaine Edmunds, who they thrust into the starting role immediately mainly out of necessity. They want their young players to earn their time on the field above all else. For posterity, joining Ford on the second-team offensive line was LaAdrian at left tackle, Wyatt Teller at left guard, Ike Boettger at center and Jerimiah Sirles at right guard. Tracking the movement of the offensive line will be fascinating all spring and summer, and I'm sure there will be many twists and turns along the way with this many variables.

2) Injuries defining tight end early
- Much like the offensive line, the Bills did a great deal to push the restart button at tight end. Only one name remains from the 2018 roster, but the first two days at OTAs did not at all go according to plan. On the first day, the Bills lost tight end Tyler Kroft -- likely for the remainder of the spring workouts -- to a broken right foot. Kroft will have surgery to repair the foot, which is the same foot that he injured last season with the Cincinnati Bengals -- which forced him to miss 11 games last season. Though the timetable is currently unknown, the positive side is that this happened as early as it could have in the offseason workouts which in turn maximizes the time for a potential return. However, Kroft will miss loads of time on the field with his new team and will have to make up for conceivably a lot of lost time upon that return. Without Kroft, the lone holdover from 2018 Jason Croom worked with the first-team offense the most, but then he had to leave the practice prematurely due to an undisclosed injury. If Croom has to miss any time, that leaves the Bills with only Lee Smith, rookie Dawson Knox, rookie Tommy Sweeney and undrafted rookie Moral Stephens. Without a timetable for Kroft, it's too premature for the Bills to make a move to bolster the position. However, if it is a lengthy injury, they might be forced to have a serious conversation about it.

3) Levi Wallace opens up as the first-team CB
- The Bills were pleasantly surprised as the 2018 season went along by undrafted rookie cornerback Levi Wallace, because once he took over as the starting cornerback opposite Tre'Davious White, he progressed rapidly and potentially gave them an answer to that starting spot going into the future. However, smartly, the Bills knew they couldn't put all their eggs into that basket just yet. Like many other young players, they wanted Wallace to earn it -- also while protecting themselves in the event of a sophomore slump of any kind. After bringing in veterans Kevin Johnson and E.J. Gaines, Wallace knew he had his work cut out for him. However, the Bills opened up with Wallace as the first-team right cornerback -- signaling that he'll have every opportunity to regain his role from the second half of last season. Wallace is physically stronger than he was last season, which was a focus for him through the offseason. Johnson did work in with the first team for a set of reps later in practice, but the majority belonged to Wallace. We could wind up seeing a rotation as the spring and summer goes along, but at the very least, Wallace getting time out there was a good first step.

4) Slight change at defensive end
- With the news of the Jerry Hughes contract extension, the Bills now have a plan at defensive end past this season, with both presumed starters (Hughes and Trent Murphy) signed through 2020 at least. However, it's the remainder of the rotation that they are tinkering with to begin the spring. Through the entirety of the 2018 season, the Bills used Shaq Lawson at left defensive end to go up against right tackles, and Eddie Yarbrough on the right side to line up against the left tackle. While Lawson improved last season, Yarbrough did not play as well as he did in 2017, which led to him eventually being a healthy scratch late in the season. In the hopes to capitalize on both of their strengths, the Bills flipped Lawson and Yarbrough, with Lawson lining up against the left tackle and then Yarbrough against the right tackle. It's a subtle change, but one that could help the Bills with their rotation. Yarbrough was much more productive working from the left side of the defense in 2017 than he was with the opposite in 2018. Lawson's transition to left defensive end was slow, and he hasn't been able to regain the pass-rushing prowess that he had at Clemson -- which, oh by the way, was all done from the right side of the defense. If the move were to be permanent, the hope from the Bills would be that both players get back to a more natural position to provide the team with a semblance of a pass rush from their rotational players. As most things with OTAs go, we'll see if the trend continues, but it was a definite change from anything that we saw last year.

5) EJ Gaines shows his versatility
- The Bills attempted to create some competition and depth at cornerback by signing both Kevin Johnson and E.J. Gaines, and although Gaines didn't get first-team reps on Tuesday (which could change as the spring goes on), he did shed some light as to what the Bills envisioned with him. Gaines lined up at left cornerback with the second-team defense against two wide receiver sets, and then when the offense subbed in a slot receiver, Gaines flipped inside to a nickel corner role. Even if Gaines doesn't win the starting position on the outside, he can become a multi-use backup to any of the three positions. That lack of depth at cornerback caused a lot of problems in 2018, especially without having a reliable option to step in for nickel corner Taron Johnson in the event of an injury.

6) Foster up and down
- While it's clear that second-year wide receiver Robert Foster returned back to Bills practice with a lot more confidence in his route running and his place on the roster, the speed threat did struggle with drops throughout the day. However, the talent was plain to see as he was running routes crisply and precisely -- all while having his opponents worried about his speed. Foster improved as the day went along, burning past Kevin Johnson down the field on two separate occasions. It was notable that he got past Johnson because the cornerback otherwise had a great day of practice. On the second of those deep routes, Foster went up and brought down the pass between Johnson and the oncoming safety -- and even though multiple defenders and coaches tried to signal that it was incomplete, the play happened ten feet in front of me and I saw Foster come down with two feet inbounds and the ball securely in his hands. It was the biggest offensive play of the afternoon, and a good example of what he can provide to the offense. Foster, along with Zay Jones, Ray-Ray McCloud and Victor Bolden, were the primary players taking reps with the first-team offense on Tuesday. Cole Beasley (core muscle surgery) and John Brown (undisclosed) did not take part in team drills.

7) Milano looks to be all the way back already
- If there were any concerns over the availability of the up-and-coming weakside linebacker Matt Milano due to his late-season injury, those are now mostly erased. Milano, who broke his leg in late December, fought through his rehab and was back on the field in full capacity without missing any practice time. His presence wasn't the only impressive part, it was his play on the field. Milano was zipping around all over the field and played the role of a disruptor in coverage on a pair of pass plays. It doesn't appear that Milano's injury is mentally limiting him at this point of the year, though it will be another test entirely once the pads come back on along with some contact. However, these are all great signs for a player that is vital to the Bills' lofty goals on defense in 2019.