Joe B: 7 observations from Bills - Patriots 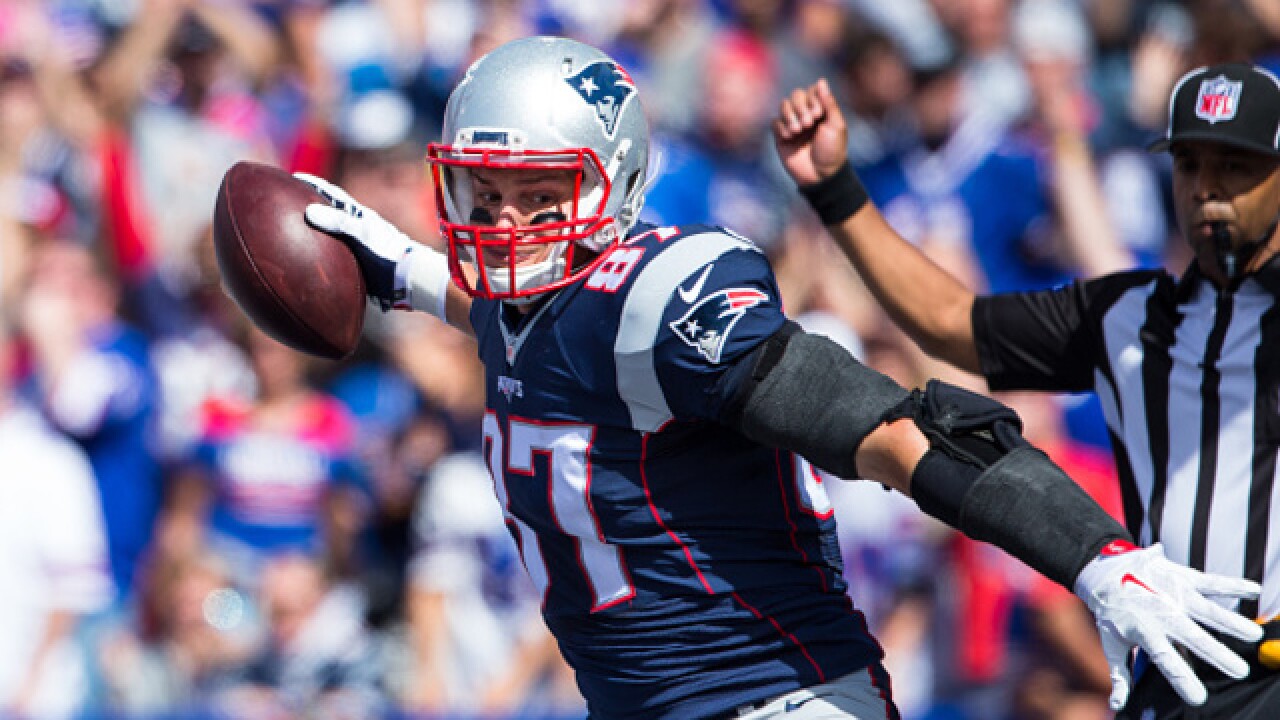 After the Buffalo Bills shocked the National Football League with a dominant victory in Week One over the Indianapolis Colts, the big question was simple:

Are the Bills for real?

After the New England Patriots got done with them, Bill Belichick, Tom Brady, and company sent the hopes crashing back down to Earth. As long as they’re still around, the Bills are still behind the Patriots, and that was very apparent through the 40-32 loss in Week Two.

Some observations from the game:

1) Brady, Brady, Brady
- Remember a week ago when the Bills shut down Andrew Luck and the Indianapolis Colts in the early stages of the game? The Patriots went and blew up any notion that the Bills would play any quarterback, regardless of skill level, tough enough to put the team in a position to win the game. Tom Brady took that narrative, crumpled it up into a little ball, and threw it clean out of Ralph Wilson Stadium Sunday. Brady was spreading the ball around to really whoever he wanted. Rob Gronkowski led the way with 113 yards, Julian Edelman chipped in 97 yards and two touchdowns, Aaron Dobson rose from the bottom of the depth chart to rope in 87 yards, and someone name Michael Williams even caught a 15-yard pass. Brady set the single-game record for most passing yards against the Bills in franchise history, by throwing for 466 yards on 38 completions. Safe to say, the rumors of Brady’s demise were greatly overblown.

2) No time to rush the passer
- One of the reason why the Bills struggled so much against the pass was because of the Patriots game plan. Brady made it a point to get the ball out within one-to-two seconds, which effectively neutralized any hope the Bills dominant defensive line had of making a major impact on the game. It was done, smartly, to not only take the defensive line out of the game, but to make sure the two young players in the middle of their offensive line wouldn’t be what lost them the game. The Bills just never provided a counter-punch, and Brady went on his merry way to 466 passing yards. At the very least, the Bills could have brought their cornerbacks up on the line every single play, but they never did that. Or, Rex Ryan could have dialed up exotic blitzes like he did against Indianapolis, but that didn’t happen either. It was an uncharacteristically boring day of defensive play calling for Ryan, and it led to Brady’s big day.

3) The offensive line was a mess
- Not surprisingly based on the Week One performance against Indianapolis, the offensive line play was atrocious on Sunday. With the exception of Richie Incognito, the other four starters along the offensive line all struggled mightily. Rex Ryan blamed it on being down in the game and having to throw the ball down the field, but, that doesn’t account for just getting beat in one-on-one opportunities, which caused Tyrod Taylor to run for his football life. Left tackle Cordy Glenn couldn’t do anything against defensive end Chandler Jones, which led to three of the Patriots eight sacks. Rookie right guard John Miller had another poor performance, and the same can be said for both center Eric Wood, and right tackle Seantrel Henderson. While the Bills found a fantastic starter at left guard, the rest of the line has performed way below expectations through two weeks.

4) Open. It. Up.
- The Bills didn’t show much on offense in the Week One victory against the Indianapolis Colts, but the one thing they did show was a passing attack built mostly on short throws that yield yards after catch. Outside of the one deep touchdown to Percy Harvin, the Bills really kept everything short. So, both smartly and predictably, the Patriots decided to play the pass short, essentially daring Tyrod Taylor to beat them deep. New England used a lot of single-high safety looks, which meant the outside receivers were getting some one-on-one matchups as the game was going on. But, whether it was because of poor blocking up front, or a hesitation from Taylor that he didn’t show last week, the Bills just didn’t open it up. The one time they did, though? Percy Harvin drew a pass interference penalty and it set the Bills up near the end zone. Defenses will continue to mimic what the Patriots did until Taylor proves he can beat it… and don’t be fooled by the late passing stats — New England backed off into more of a prevent defense when they were up by a substantial margin in the fourth quarter. Taylor and the Bills have some proving to do, and they’ll be up against a Miami team that has not looked the part defensively through two weeks.

5) No poise, discipline
- Rex Ryan alluded to not being able to win a game when you allow over 500 yards to the opponents. Well, tack on another 140 yards to those 507 yards due to penalties, and it’s a miracle that the Bills didn’t get beat worse than they did. The Bills were flagged a whopping 14 times in that game, and a lot of times, it was just a senseless, and stupid penalty that could have been avoided. The Bills were flagged for a handful of personal foul calls, and of the four safeties on the Bills roster, three of them brought a call of that distinction to Buffalo’s totals. Quite frankly, that falls on the head coach —but let’s not pretend that this wasn’t an issue in Week One. The Bills won so a lot wasn’t made of the totals, but the Bills were penalized 11 times for 113 yards against the Colts. Through two games, the Bills have played an emotional brand of football that has really lacked some discipline, and that is totally on Rex Ryan.

6) Say his name, Rex
- Through the week, Rex Ryan had a lot of fun through the week flinging a shot here or there in the direction of the Patriots. One of the most interesting ones was his outright refusal of acknowledging New England running back Dion Lewis as a bonafide member of their offense, and then told reporters multiple times that he didn’t even know Lewis’ name. Even after getting lambasted by the Patriots — and really forget the score, if it wasn’t for the Patriots trying to stack the points against the Bills when the game was in hand then the score would have been way worse than it was — Ryan refused to acknowledge Lewis’ existence in the New England attack:

“Yeah, that’s the reason we lost. Go ahead, I still don’t know his name. Next time run the ball.”

Lewis did run the ball, albeit seven times, but gained 40 yards and averaged over five yards per carry. Not only that, he caught six passes for 98 yards, including a 40-yard reception over the head of one of the team’s best defenders Nigel Bradham. Rex Ryan isn’t going to change for anyone, this much we know, but, to not even acknowledge a player that accumulated 138 yards of the Patriots 507 total is a bit silly.

7) LeSean looks healthy
- Most of this column centered around how the Patriots — and how the Bills, really — deconstructed the Week Two matchup for Buffalo, but here’s a sign of life: LeSean McCoy looked pretty good running the ball against New England. Following a flare up of his injured hamstring in practice this week, McCoy looked like he was running with the type of explosion people have grown accustomed to with him in the NFL. He gained 89 yards on 15 carries, and was keeping runs alive when they looked bleak. He added another three receptions for 27 yards, so, having a 100-percent McCoy is huge for a team that wanted to focus as much on the running game as they said they would.

Bills MVP: LeSean McCoy
- Sure, Tyrod Taylor had four total touchdowns, but McCoy was the most impressive Bills player on the field on Sunday. Most of Taylor’s positive plays came near the end when New England pulled back on their game plan.

Bills LVP: Rex Ryan
- There are many culprits for these honors, but, not preparing a counter for Bill Belichick’s initial game plan, and generally allowing the Patriots to do whatever they wanted made Ryan the least valuable player. Especially considering the 14 penalties and generally undisciplined play, it all points to the head coach to be a lot better than he was and to make sure his team doesn't look as unprepared next time around.

Final Thoughts:
- So, the Bills weren’t ready for the big time just yet. Everyone had high hopes that perhaps 2015 would be the year that the Bills would start to challenge the Patriots for supremacy in the AFC East, but those were succinctly dashed in the three-plus hour display at Ralph Wilson Stadium Sunday. Even still, it is important to keep perspective. The Bills made it through an opening two-game stretch against the two teams that played in the AFC Championship Game last season, and managed to go 1-1. Now, they go into a stretch of the season where wins must be had, and it starts with another AFC East opponent. The Bills did not look good for much of the game with New England, but, all is not lost. There are still 14 games to play, and plenty of opportunities for this team to prove that they are actually a playoff team. This much is evident, though: an answer, and a strong one at that, is needed.