Joe B: 7 observations from Bills - Giants 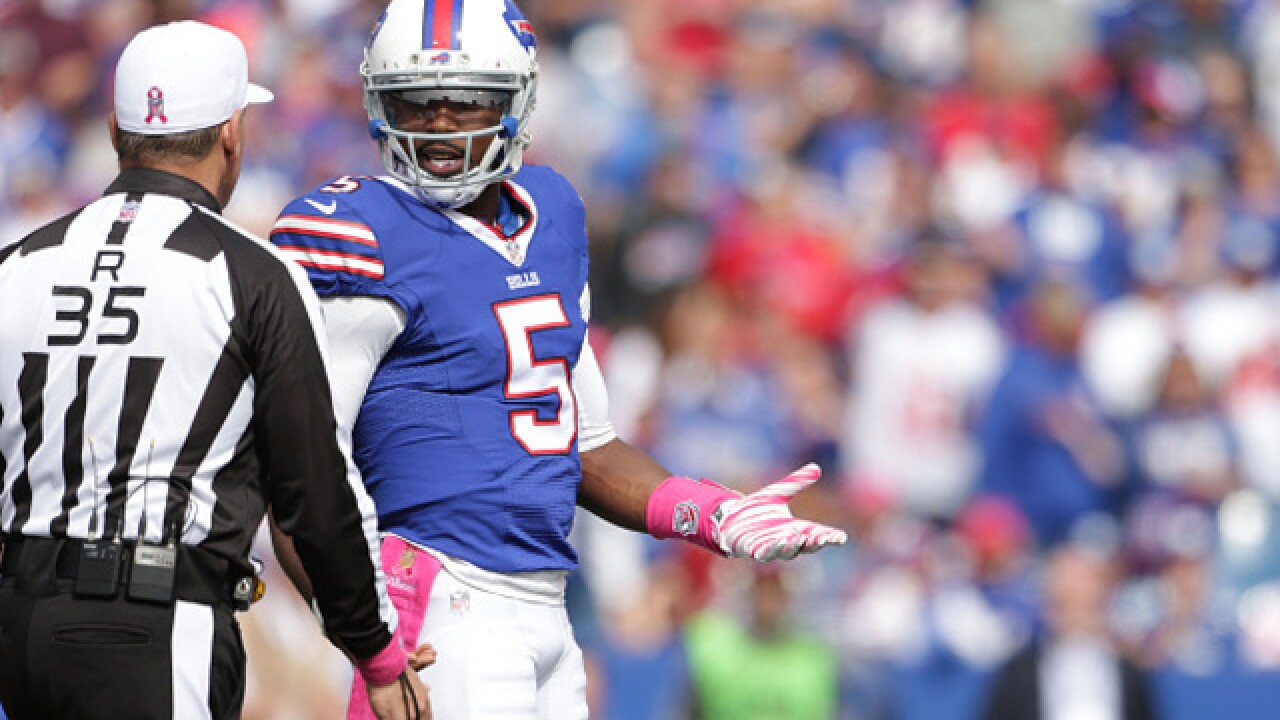 In a game that they were heavily favored, against a team that has blown a pair of chances to be undefeated this season, the Buffalo Bills from Weeks One and Three were nowhere to be found at Ralph Wilson Stadium on Sunday.

Instead, we saw the Bills play an undisciplined game on the way to a 24-10 loss to the New York Giants, bringing their record for the season to an even 2-2. How did it all happen?

Seven observations from the Bills second straight loss at home:

1) Rex’s tone misses the mark
- For the third time in four weeks, and not to mention the third time in three home games, the Bills accrued a double-digit amount of accepted penalties against them. The Bills were flagged 17 times for 135 yards, bringing their season total at Ralph Wilson Stadium to 42 total accepted penalties. Including a chop block penalty in the fourth quarter, the Bills were flagged for five personal foul calls in the game. Instead of holding his own team accountable, Rex Ryan went on the offensive as only the Bills head coach could do:

“Well I’m gonna tell you something, I’m proud of the way this team played. Can we play a lot smarter? Absolutely, but I’ll take a team that will fight over a team that won’t. I’ll sit back and take it any day of the week and bring on the next team. So that’s how I look at it. Give me a team that’s got some fight and will compete to the very end… right, wrong, or indifferent no matter how good the officiating is, or whatever. Makes no difference to me.”

That attitude is even more concerning when you see some of the quotes from the Giants locker room, too. On the Giants final drive of the game, in which the Bills took three personal foul penalties, offensive lineman Justin Pugh basically said all hell broke loose.

"They were saying it was over out there," Pugh said according to Matthew Fairburn of Syracuse.com. "On that last drive, their defense was kind of like, when they were getting penalties, they were like, this game is over anyway.' That is kind of how it was. It was kind of crazy out there that last drive. Mayhem. Refs yelling at players, players yelling at refs. I was just sitting back and trying not to get fined $15,000 for something."

Whether it’s a problem at home for getting too emotional at games, the penalty problem is a very, very real one. The players seemed to hold themselves more accountable than the head coach of the team did. But, that is what you’ll get from a coach such as Rex Ryan — when he’s backed into a corner, he’ll try and fight his way out of it, just as his team did during the Giants final drive. It was the wrong tone after a game that, to be quite honest, the Bills were outclassed in during the first three quarters of the game.

2) Failure to adjust
- The penalties were quite obviously an issue, but even more so, was the team’s failure to adjust to what the Giants were doing to their offense. In the first half, the first six possessions for the Bills ended in four plays or less. They gained a total of 78 yards in the first 30 minutes, had only two first downs, and averaged exactly three yards per play. The Bills said they wanted to come out and establish short, quick-hitting pass plays to get the offense going — but the Giants had game planned all along for that. They hemmed the Bills in, and yet again, a team challenged the Bills to beat them deep. It seemed like the offense fixed that part of their game in Miami, but the Giants once again kept the Bills from ever getting comfortable in the first half. That aspect of the game is a concerning one: when the initial game plan doesn’t go as planned, figure out another way to beat what the defense is presenting to you. Granted, it’s not a simple task to do on the fly, but, that’s why the Bills armed themselves with some of the best coordinators and coaches money could buy. They have to find a way.

3) Pedestrian Tyrod
- Just like against the New England Patriots in Week Two, Bills quarterback Tyrod Taylor really didn’t start to establish himself until it was almost too late in the fourth quarter. Through the first half, Taylor was averaging only three yards per attempt, rushed for only two yards, and as it was previously stated gained only two first downs. He was missing his throws, and he never truly got comfortable in the pocket. With how effective he was last week in Miami, it seemed like Taylor could overcome the previously established blueprint. But once again, when the opposing defense challenged him to open it up and throw it deep in the first half, Taylor didn’t. He came alive with a different approach in the second half and started making some throws that dropped a jaw or two. Too little, too late, however.

4) Despite it all, the game was theirs for the taking
- In the fourth quarter, the game started to look quite similar to the Giants’ first two losses of the season. They had a double-digit lead in both those games, much like they had against the Bills, and ended up on the wrong side of box score. To start off the final quarter while down 13 points, the Bills marched it right down the field, got it to a first-and-goal situation and were just one yard away from a game-changing touchdown. From five yards, two yards, and one yard out on second, third, and fourth down, the Bills neglected to run the ball right up the middle. With how well the left side of their offensive line has played in 2015, it was a huge surprise that they completely abandoned it on the goal line. Instead, the Bills tried short rollout passes that were completed before the goal line, and the Giants were all over it. On the third down, Taylor couldn’t even get the bass off on a roll out to the right. Those final two play calls left a lot to be desired, and all that was really needed was the ‘ground-and-pound’ offense they touted in the spring and summer, specifically with a 243-pound running back that specializes in north-south runs. They overthought it, turned the ball over on downs, and spoiled a perfectly good opportunity to get within one score. It made the following touchdown drive leave even a worse taste in their mouths because they very well could have taken the lead. That’s right, through the 17 penalties, the lack of composure, the terrible first half among everything else, the Bills had as good of a chance as possible to win the game — and they blew it.

5) Defense a no show in the first half, too
- The offense wasn’t just to blame for the slow start. While they couldn’t move the ball, and that certainly didn’t help anything, the defense couldn’t get nearly enough stops and it put the Bills in a huge hole. Eli Manning threw for 107 yards in the first half, two touchdowns, while the running game gained 64 yards and averaged 4.3 yards per carry. It just seemed like the Giants were always one step ahead of the Bills throughout the first thirty minutes, and that’s really when the game was lost. Despite the Bills pulling it within one score in the fourth quarter, the defense laid an egg. A missed tackle from Nigel Bradham and Bacarri Rambo being aligned incorrectly helped lead to the long Rashad Jennings touchdown to seal the Bills’ fate. The defense has shown “elite” tendencies at times, but sorely lacks the consistency.

6) Sammy sorely missed
- Lost in the shuffle of the penalty frenzy is a likely explanation for a lack of operating room underneath. The Bills were without Sammy Watkins, who hasn’t exactly lit the world on fire in 2015 so far, but has the type of talent that demands respect from an opposing defense. Watkins being in the lineup helped take pressure of Percy Harvin, Robert Woods, and really even Tyrod Taylor because the defense had to game plan and make sure they always knew where Watkins was. Without Watkins, Harvin and Woods were targeted 13 times collectively, and had a combined six catches for 59 yards. There were many, many other reasons why the Bills lost this game (the lack of a running game, no defensive stops when they needed it, etc.). However, not having Watkins was an overlooked factor to their eventual demise.

7) Dan Carpenter on thin ice again?
- It’s been an up-and-down 2015 for kicker Dan Carpenter to say the least. Carpenter has been called out by his head coach multiple times, has uncharacteristically struggled following an injury, and now could be on the hot seat once again. Carpenter nailed a 51-yard field goal in the first half, but that was the last of his successful field goal tries. The Bills marched the ball down the field and took six minutes off the clock in the third quarter. When their drive stalled, they brought out the kicker for what should have been an easy make. Instead, from 30 yards out, Carpenter hooked it wide left. After the game, Rex Ryan offered up a succinct “Dan’s a pro, he’s got to make that kick.” Carpenter is now 5-of-7 on the year after a tumultuous preseason. He’s likely okay for now, but you could read it on Ryan’s face — he wasn’t happy.

Bills MVP: TE Charles Clay
- 13 targets, nine receptions, 111 yards. The Giants didn’t have anyone that could cover Charles Clay, and he took advantage in the second half.

Bills LVP: WR Robert Woods
- A number-one receiver he is not. Woods failed to live up to the starting opportunity, catching three of his five targets for 33 yards, and fumbling away any final hope the Bills had to make a comeback in the game.

Final Thoughts:
- In a game in which they were favored, the Bills floundered against a team that doesn’t boast nearly as much talent as they do. It was a lost opportunity, and the Bills just looked like a team that was unprepared to go away from the original plan of attack. Eventually they warmed up in the second half, and even had a chance to win the game. However, it was apparent very early on that the Bills were not ready to play in this game. Do they deserve a certain degree of credit because they were in a position to potentially challenge to win the game in the fourth quarter? Sure they do. However, being an absent team on all three phases in the first half, along with an overall lack of discipline throughout the entire of the game, helped the Giants to a fairly easy victory. That said, it’s only four weeks into the season, so there is no reason to be jumping to conclusions that the team is incapable of making a playoff run because of what happened in the Giants game. The Bills are still a talented team and have the right pieces. They were just out-schemed and outplayed by the Giants early in the game, which ultimately led to their demise. Adjustments need to be made, no doubt, but the Bills have still showed enough in two of the first four weeks to try and solve the playoff curse. If they don’t, then the criticism should come in droves. For now, there’s still a lot of season to be played.