Joe B: 7 Observations from Bills - Dolphins 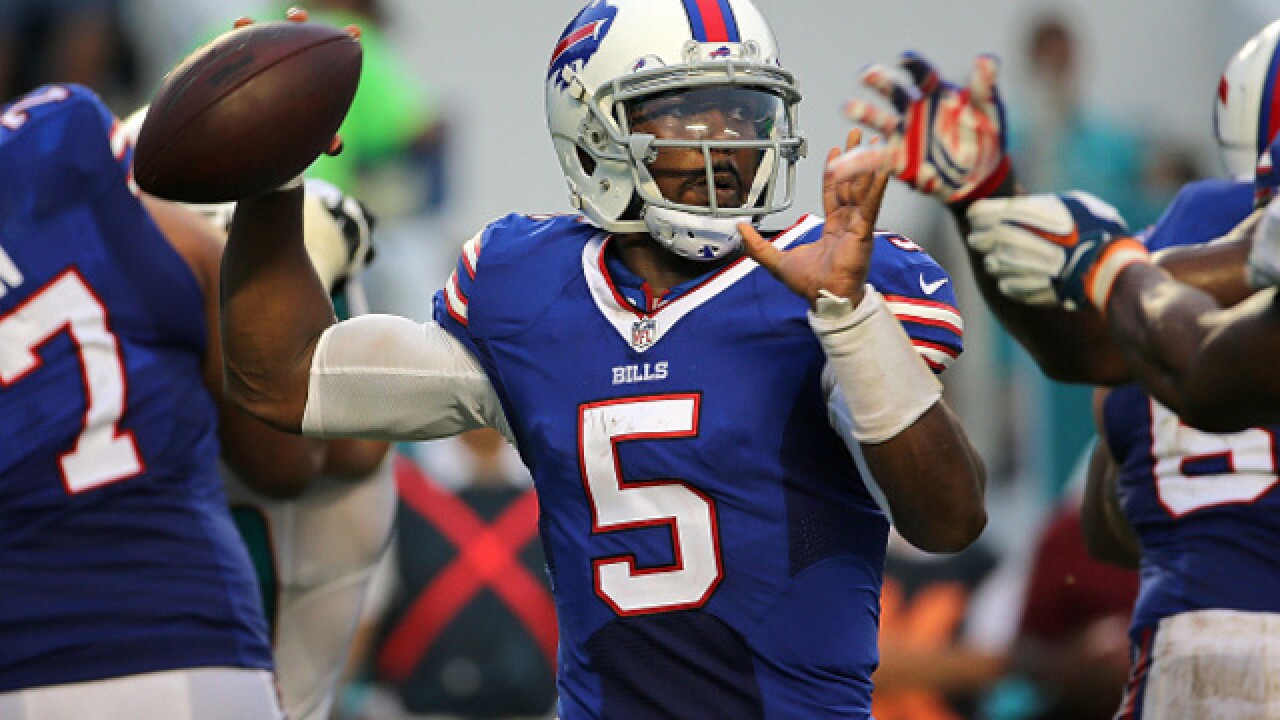 In what was to be a good gauge for the Buffalo Bills early in the 2015 season, Rex Ryan and his players marched down to Miami and completely embarrassed the Dolphins on their home turf.

The Bills showed quite a bit in what was very close to a complete effort, and quite possibly put the head coach of their division rival on the hot seat in the process. How did the Bills do it in the 41-14 dismantling of the Dolphins on Sunday?

Seven observations from the game:

1) Tyrod shows progress
- For the first time in his young starting career, Tyrod Taylor had to prove to an opponent that a game plan that previously shut him down wouldn’t, in fact, do the same thing two weeks in a row. The Patriots had a very clear plan for Taylor, taking away all the short routes in the effort of forcing him to beat them deep. The Patriots played with nine and ten players in the box on some plays, giving Taylor and the Bills passing attack a lack of respect. The strategy worked, Taylor hesitated, and the game was too far gone before the offense started putting some drives together. Taylor quickly showed that the problems from last week would not be an issue in Miami. He opened it up, taking multiple shots down the field. Most importantly, he didn’t hesitate and trusted what he saw, which led him to making quick enough decisions to get the ball to his receivers in space. This was the exact answer Taylor needed, and one that will change the complexion of how teams will game plan against him. It will be quite interesting to see how the New York Giants plan to defend him.

2) Hughes ate, and is now full
- The biggest development for this matchup happened when the Dolphins took on Jacksonville in Week Two. Left tackle Branden Albert suffered a hamstring injury, and in turn, it ruled him out for the contest with the Bills. That left Jason Fox, who isn’t exactly well-rounded as a pass protector, against a premiere pass rusher in Jerry Hughes. To no surprise, Hughes tore through Fox all game long, and had multiple pressures that significantly impacted the outcome of plays. Hughes set the table for his teammates, and was clearly one of the best players on the field. Don’t let the stat sheet mislead you, Hughes could not be contained by the Dolphins putrid offensive line that they trotted on the field. Ryan Tannehill was running for his life all game long.

3) A running controversy?
- Let’s not jump to conclusions just yet in regards to rookie Karlos Williams, and veteran runner LeSean McCoy. The more practiced hand, McCoy, could only muster 16 yards on 11 carries and chipped in one reception for 10 yards and a touchdown. McCoy is still hampered by the hamstring injury he suffered during training camp, and Rex Ryan even went as far as saying the runner was playing on “one-and-a-half-legs” at times. In the mean time, the rookie Williams rushed for 110 yards on just 12 carries, and notched his third straight game with a touchdown on Sunday. Williams, as more of a north-south style of running back, is a phenomenal fit for Greg Roman’s offensive scheme, and he has showed it through the first three weeks of the season. He has clearly shown to be a player that is worthy of touches in games, and now it’s a matter of finding the right balance with him and McCoy. If McCoy is still that bothered by the hamstring injury, the Bills should give legitimate consideration to shutting him down for a week or two just to help get his health back to 100-percent for the stretch run of the season. If they don’t, especially because it’s a hamstring, this could be an injury that bugs him all year long. With Williams playing the way that he is, he has afforded them the opportunity to rest him if they see fit.

4) Darby has progressed very well
- Following a tumultuous preseason, rookie cornerback Ronald Darby had been viewed as a potential weakness for teams to exploit. Through the first three weeks of the season, Darby has definitively stepped his game up and has become a solid starter opposite Stephon Gilmore — and he’s certainly been tested through the weeks, too. A clear change from his first few weeks on the job, Darby is now getting his head turned around when the ball is in the air, and shows the clear ability to stick with receivers. Face guarding was one of his biggest problems in the preseason, and for the time being, has clearly improved quite a bit in that aspect of his game. The rookie ended the game with four passes defended and an interception, surely making teams think twice about potentially targeting him.

5) Harvin the go to?
- It really didn’t have any time to be established during training camp or the preseason, but, Tyrod Taylor has found his favorite target in the Bills offense, and it’s none other than fellow free agent signee Percy Harvin. Taylor showed throughout the game that he not only trusts Harvin in his short routes, but, to beat his man deep on a one-on-one opportunity. Not only that, Harvin has delivered in his opportunities this season. He brought in seven receptions out of his eight total targets, and made  quite a few Dolphins defenders miss him in the open field in the process. Despite his limitations during the practice week, Harvin has proven to be yet another solid starting option for this team, and if Sammy Watkins is forced to miss any time, can step into the role as the top receiver on the roster.

6) Watkins injury
- The Buffalo Bills may have to endure another injury to their top draft pick from 2014, as top wide receiver and second-year player Sammy Watkins had to leave the game in the first half with a calf injury. When the game went to halftme, Watkins potential return to the game was quickly changed from ‘questionable,’ to ‘out,’ as he reappeared from the locker room in street clothes. After the game, Rex Ryan called the injury a “big concern,” primarily due to the nature of the injury, and how much that part of his body is essential to the position he plays. Based on the way the Bills were talking after the game, there is a clear chance that they may have to head into the Week Four contest with the New York Giants without their top wide receiver. The Bills didn’t categorize the injury as “significant,” or really give much more insight other than the “big concern” comment from Ryan, so it’s a wait-and-see situation at the moment. If he can’t play, the Bills will need Robert Woods to fill the void in the starting lineup.

7) Poise and composure shows up in Week Three
- While it wasn’t without some faults, based on how often the Bills were penalized through the first two weeks of the season, Sunday was a complete step in the right direction of playing with a bit more composure. In the first two weeks, the Bills had been tied for the league lead in penalties. On Sunday against the Dolphins, the Bills had only five penalties called on them for 45 yards. Perhaps it had something to do with the Dolphins coming out like they didn’t want to be there, and the game being over at a very early stage. However, they shook off an overly-emotional output against New England and came back to play within themselves, and more importantly, within the confines of the rules — at least to the referee’s discretion.

Bills MVP: DE Jerry Hughes
- He didn’t exactly have a huge impact on the stat sheet, but Hughes was dominant against backup left tackle Jason Fox, and helped change the course of several plays when the Dolphins still had a chance in the game. Tyrod Taylor also received some consideration, but, Hughes was dominant all game long.

Bills LVP: S Bacarri Rambo
- There isn’t much to complain about for the Bills, so Bacarri Rambo gets the least valuable player award because he delivered two bone-crunching hits…. to his own teammate. And both times, it was the same player. Both times, it was Ronald Darby, and he was shaken up after the play. But, really, that’s just nitpicking. It was a fantastic showing for the Bills.

Final Thoughts
- For the second time in three weeks, the Bills completely dismantled a potential playoff contender in the AFC, and showed that they will be heard from in the race for the postseason in 2015. They completely dominated the Dolphins, and, may very well have given the Dolphins some evidence to think long and hard about the future of head coach Joe Philbin. Most impressively, Tyrod Taylor showed that he would not fall victim to the blueprint that the Patriots set forth in their Week Two victory in Buffalo. Taylor hit some big time throws, and showed that there’s more to him than just the short throws that New England successfully took away from him. It’s still early, but, there is a lot to like about not only this Bills team, but with Taylor as the starting quarterback. This much is for sure: 2015 is setting up to be a fascinating year all the way around, and that the Bills have as talented of a team as they’ve had since the 15-year playoff drought started.